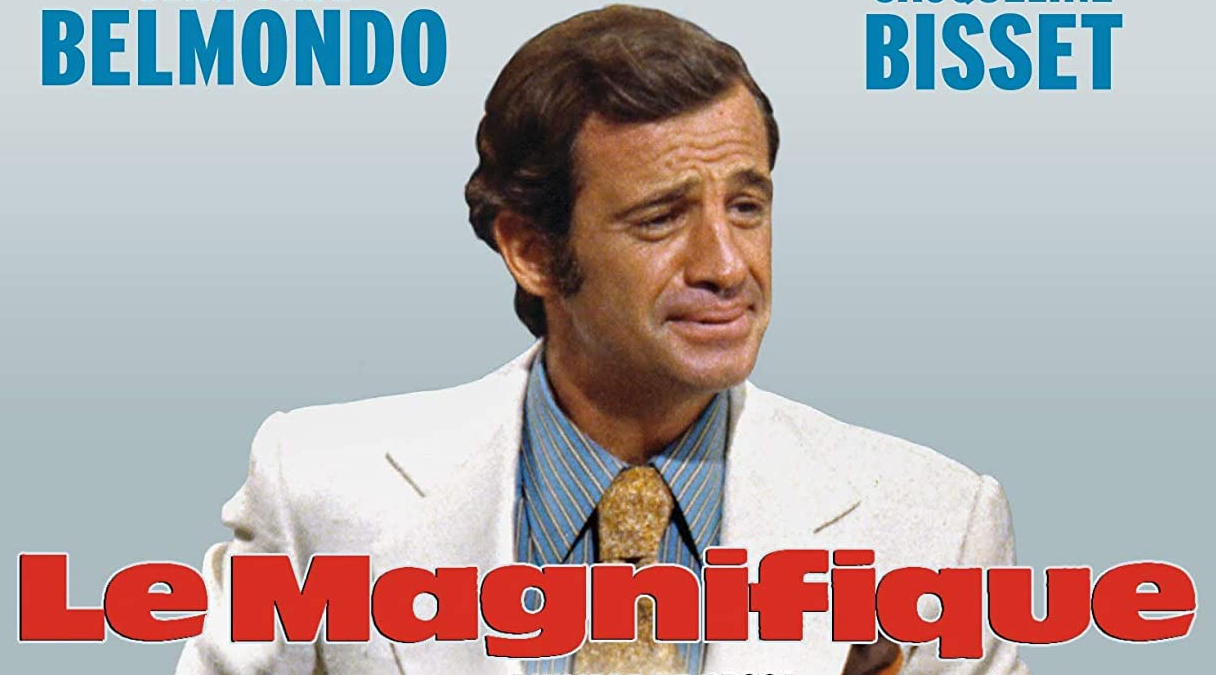 Le Magnifique is another winning film by director Phillippe de Broca and star Jean-Paul Belmondo about a writer with a wild imagination.  Oh, yeah, and Jaqueline Bissett.  Kino Lorber has brought out of print film to Blu-Ray with a new commentary.

Le Magnifique along with King of Hearts is writer/director Phillippe de Broca at his nimble best.  We have seen the writer in crisis love story before.  We have also see the overactive imagination spilling over into the waking life concept before as well.  Never in the hands of two masters like de Broca and Belmondo.

Successful Novelist François Merlin (Jean-Paul Belmondo) is finding it difficult to find the inspiration to finish his latest in the Bob Saint-Clar spy series, The Man from Acapulco. He has written 42 novels over the course of 10-years, most he says to pay for alimony and child support.  But he’s done.  He’s had it with the character and the writing.  That is until Christine (Jacqueline Bisset) a sociology student comes into his life.  Quickly François and his overactive imagination place Christine, now Tatiana, into the story.  As the book adroitly mirrors François’ life and vice versa will Bob be able to save Tatiana or Will François’ be able to finish the book in time and get the girl?

No one knew how to skew Belmondo’s image in the way that de Broca did.  Here de Broca again finds Belmondo a willing participant in shattering his image and not just being willing but enthusiastic about it.  As François/Bob, he is able to not just lampoon his leading man of action status but pay homage to de Broca.  The alter-ego is as much Belmondo’s onscreen persona (along with a few digs at Sean Connery, Roger Moore, and Michael Caine) as the writer seems like de Broca and all writer’s insecurities made into an on-screen persona.

The magic of the film is that Belmondo excels at both parts with equal but very different comedic energies.  François is all internalize reluctance.  Bob is the kind of physical tomfoolery that Peter Sellers did so well in the mid-70s.  Though never an imitation, Belmondo’s performance is like a nimble cat jumping gracefully from comedic set pieces to set pieces all with that trademark smirk and glint in the eye charisma that made him a superstar for so long.

Though Le Magnifique does not work without the grace and talents of Jacqueline Bisset.  Much like Belmondo’s François/Bob, Bisset’s Christine/Tatiana allows the actress to exude out completely different comedic energies.  As Christine Bisset is reserved and callow.  As Tatiana, she is a complete Femme Fatale in the model of Vesper Lynn just… funnier.  Though Bisset’s work may be the more reserved of the two she is never left without anything to do.  In her performances de Broca levels his deadliest criticisms of the genres he’s working in.  Bisset is able to adroitly lampoon both roles with a style that plays invisibly to the clichés.  Though there are enough nods in her work and the way that de Broca directs the film that assures anyone that this is much smarter work than one would initially think.

Le Magnifique is nearly flawless in its lampooning of both romantic comedies and the spy thriller.  De Broca has added a great kick to the pants of the cliché of the tortured writer for good measure.  This is one film that is head to toe designed to please everyone and anyone that lays eyes on it.

The only slightly disappointing aspect of the disc is that StudioCanal did NOT provide a new transfer.  This is the same transfer from the DVD release, and it shows.  The biggest issue is the digital artificing during some of the night scenes.  The contrast levels are terrible on this transfer. When compared to the recent Cartouche release that has a near-flawless transfer it was disappointing, to say the least, that StudioCanal did not furnish something similar.

The newly audio commentary by historians Berger, Mitchell, and Thompson bring the same sort of deep dive into the film with the conversational tone they brought to the Crossed Swords commentary they did.  Details include their respective first viewing of the film, the work of de Broca, the clever script and how it relates to Gambit (the Ronald Neame film), its relation to the Lewis/Tashlin films of the 1950s and their visual style, the work of Jacqueline Bisset, how great the turn is when it reveals itself to be a very different film, the great comedic “dummy deaths”, some asides about Columbo and Blake Edwards filmography, the French films of the time that Le Magnifique was released, Vittorio Caprioli work in the film, the set design of the film, de Broca’s perfect use of tone, a few personal asides about how the film discusses a writer’s life more true and less comedic though for comedic effect, the way that de Broca’s filmography as a whole and how it relates to Le Magnifique, the great comedic chops of Jacqueline Bisset, Belmondo’s status of an international movie star and why he never came over to US to make English Language films, Blueberry the Mœbius comic being based off of Belmondo, and more.  The trio has a great time discussing the film but also giving us some great information about the production and personal asides.

Noted that both French and English Language Tracks because this English Track may be one of the better tracks though the only drawback is that Belmondo does not voice his character.  One may want to use the English track as it helps with being able to watch what is a very layered visual comedy, allowing you to freely look at some great visual gags.

Le Magnifique is a brilliant satire that both loves and sends up the genres its works in.  Highest Possible Recommendations!

Kino Lorber’s Blu-Ray of Le Magnifique is out now