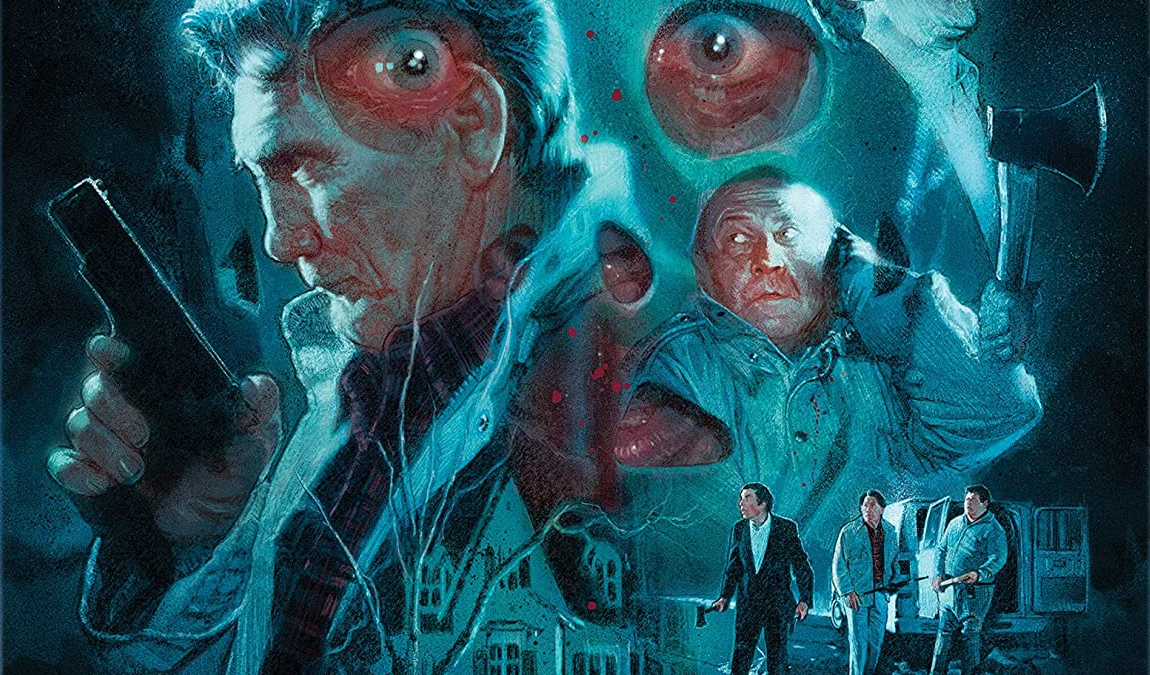 The cult horror classic Alone in the Dark makes its Blu-Ray debut thanks to Scream Factory filled with special features and a new transfer.

Jack Sholder is a director I know because he directed one of my favorite action films of all time; The Hidden.  It is always fun when you discover or fully realize that he’s made a number of other films you love like the lunacy of A Nightmare on Elm Street Part 2, the anti-buddy action film Renegades or the cult-classic low budget superhero TV Movie Generation X.  The outright delight is when you discover that they’ve created a film that could be a rival to your favorite film which Alone in the Dark may prove to be.

Psychologist Dan Potter (Dwight Schultz) and his family move to a sleepy town so that Potter may replace the former psychologist who had left.  From the pot-smoking director (Donald Pleasance) to the strange patients, Potter should know he’s not in for a good time.  Bells and whistles should be going off when he meets the “third-floor” residents Frank Hawkes (Jack Palance), Preacher  (Martin Landau), Fatty (Erlind Van Lidth), and Bleeder (Phillip Clark). Unabated Potter continues on his merry way even bringing his anxiety-ridden sister (Lee Taylor-Allan) into town.  Soon after her arrival and their going to a Punk show (no, a real punk show headlined by a band calling themselves The Sic Fucks) a blackout occurs.  Blackout, mentally unstable violent patients, new psychologist, and family … the writing is written on the walls with blood.  Havoc ensues and the quest becomes how far is the family willing to go to survive.

Everything about this film wreaks of 1980s paranoid panic about the mentally unhealthy.  The exploitation aside it’s a hell of a fun ride.  The film understands building the character or what others call the “slow burn” is vital for this type of film.  The film does finally hit its stride in the final 35-minutes it’s worth the wait.  A mixture of knowing performances, great gore effects, and expertly executed set pieces really make the film shine.

Alone in the Dark may have been forgotten after its initial release but this release is bound to make fans of those that haven’t seen it.

The New 2K Scan Of The Interpositive is a solid transfer.  A review of the older transfer from the DVD release in 2007 shows a massive upgrade in all areas.  The image’s colors, contrast, grain structure, and image are all night and day better than the DVD which was decent at best.  Shout Factory has definitely taken the time to present this film in the best possible light.

The archival audio commentary by director Jack Sholder is an informative track.  Some of the details include where the location of the opening of the film, the difficulty to bring to life “two words” in the script that he wrote, how the score was acquired for free, was inspired by the writing of RD Laing, who RD Laing, working with Donald Pleasance (who he was thrilled to work with), the original idea which was different than the final outcome, how New Line Cinema became involved, the casting of Erland Van Lidth, working with Martin Landu, working with Jack Palance, Pleasance’s suggestion that he should be smoking weed from a pipe during a specific scene, the terrible experience with the first Make-up FX Supervisor, the hiring of Tom Savini, troubles with Jack Palance and working those out, Sholder’s admission of not being “a horror guy” but his enjoyment of the genre after working on it, a funny story of how they got The Sick Fucks,  his inspiration with the camera angles by Touch of Evil, shooting the riot and what Sholder called “the worst night of my life”, how the film was released and marketed or lack there of marketing, the use of Hockey Mask well before Jason took on the mask in Friday the 13th, filming the babysitter set piece, how his work on The Burninginformed the horror and suspense in this film and Nightmare on Elm Street Part 2, a great bit about scripts being good if “you learn something new on page 90”, how he created the third act siege, and much more.  Note there is a bit of silence throughout, but it should not effect anyone’s enjoyment of the film.

The all-new second audio commentary by Critic Justin Kerswell and Historian Amanda Reyes begins with their credits quick and deep dive into this film. Some of the details include where the slasher film was when this film was produced and released (1982-1983), why such classic actors were in not just this film but other slasher as well, the Lynn Shaye cameo (her first appearance), how Reagan cut funding for mental health facilities and put many that were in these facilities on the street, how the portrayal of these facilities are outright fabrications, Reyes’ first encounter with Halloween (in the TV Guide of all places and her father’s response), the history and influence with R.D. Laing, the work and career of Dwight Schlutz, their experiences with this film and how its grown in esteem in the years proceeding, the punk rock scene in the film and The Sick Fucks, a great anecdote about Palance and the lead singer of The Sick Fucks, the casting of Stage Actors and why this was done, how the New York City blackout inspired Sholder and his script, the stigma of mental health in the 1970s and 1980s, a look at mental health in the US at the time, the film’s own view of mental health, the babysitter scene, Carol Leevy who turned from Actor to a billion dollar Real Estate Broker, a look at the varied work of the producers of the film, the work of Martin Landau and Jack Sholder, the release and the critical response to the film, the crazy ending, and much more.  As with other commentary tracks, Kreswell and Reyes provide a deeply researched and informative track.

Out Of The Dark with Jack Sholder (39:45) – is an all-new interview with the writer/director. Sholder discusses his origins as a classical orchestra musician that eventually lead to an interest in film and becoming a film director.  Sholder doe a great job of discussing how he came to write and direct Alone in the Dark.  There’s a bit of some great discussion of budgeting the film, casting the film with some truly legendary actors, and other production anecdotes. There is some crossover from his commentary track but there is much to enjoy here.

Mother Choppers: The Sic Fucks Remember Alone In The Dark (9:38) – is an all-new interview with the surviving band members of the Sick Fucks and how they created the band to get into the film, the origins of the band, and much more.

Sites In The Dark: The Locations Of Alone In The Dark (11:38) – this all-new featurette is hosted by content producer Michael Gingold, much like Horror’s Hallowed Ground, they go to the various locations used by the production in and around New York.

Bunky Lives! – An Interview With Actress Carol Levy (16:24) – in this archival featurette Carol Levy discusses her career in ads/commercials,  how she got the part of the baby sister in Alone in the Dark, her career post-acting, and much. More.

Still Fucking Sick – Catching Up With The The Sic Fucks (16:30) – in this archival featurette the Sic Fucks talk about getting the gig and career post-Alone in the Dark.

Alone in the Dark is a cult classic waiting to be discovered.  Scream Factory has released another gem of a horror film.  HIGHEST RECOMMENDATIONS!