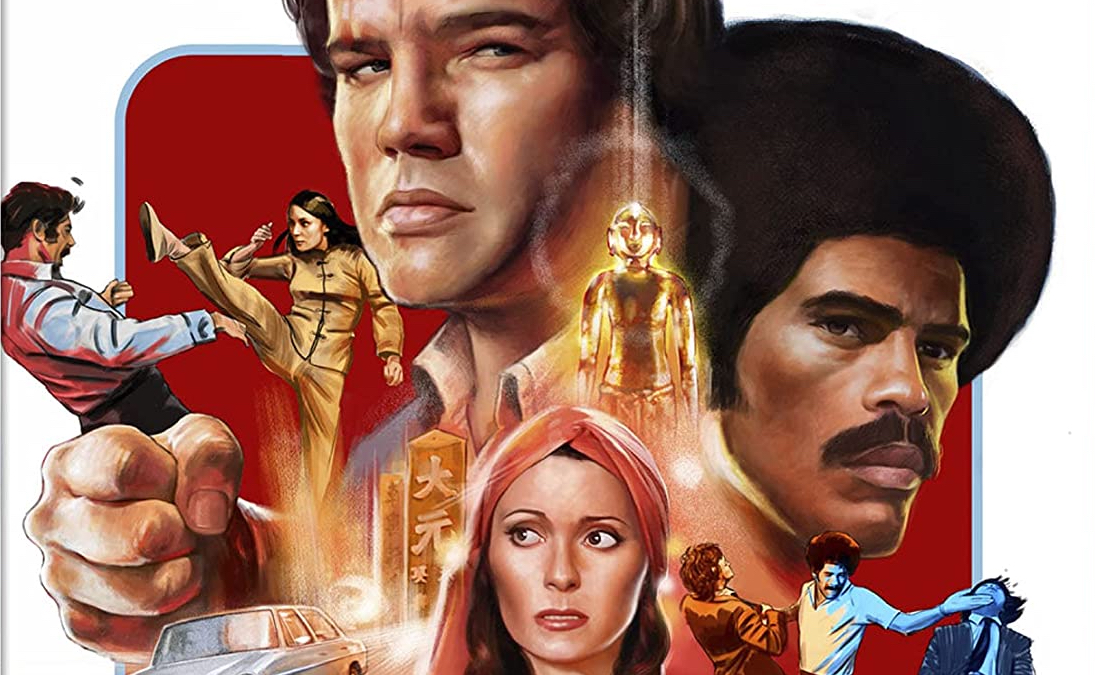 Golden Needles is the kind of unexpectedly great genre film you hope you discover but rarely do.  Kino Lorber has given this one a new 2K Transfer and commentary.

There’s a part of me that wished 10-year-old me had found this during one of the many sojourns to the local video store (mine was named VIDEOMAX – yes, all in caps).  The mixture of Martial Arts, Adventure, Shot-on-location, Detective story mashup is also too good.  Adding a young charismatic Joe Don Baker with cameos by Jim Kelly and Burgess Meredith and you’ve got a truly kickass film.

Everyone is after the legendary Golden Needles Statue and its promise to give you forever pleasure and everlasting life.  Dan (Joe Don Baker) chief among them is an American Ex-Pat living in Hong Kong.  Hired by Felicity (Elizabeth Ashley) to find the statue gets him and herself into more trouble than they bargained for.  From Hong Kong to Los Angeles back to Hong Kong the two with help by Jeff (Jim Kelly) and a mysterious Hong Kong Woman (Vivian Fung).  The group tries to fend off Triad Leader (Roy Chiao) and a Billionaire (Burgess Meredith) and find the statue before they do.

Robert Clouse’s film is a lean 90-minutes of fun globe-trotting adventure.  There’s an arched tone to the way that everything’s approached making it all the more delightful as the film makes unexpected decisions.  The film isn’t a complete subversion of the genre, but it makes enough adroit choices that even during the non-fight scenes it will keep your interests (a problem with many American-made Martial Arts films at the time).

Adding to the enjoyment is the chemistry between Baker and Ashley.  The two actors have the ineffable magic on screen that makes sparks fly.  The moments between the two as Ashley’s Felicity continually befuddles Baker’s Dan are a highlight.  Even at its end as the two figure things out in that Hollywood ending way, it’s Ashley and Baker that sell it with their heat and relationship built throughout the film.

Golden Needles is a rarity a true-blue classic waiting to be discovered.  If nothing else than to see Joe Don Baker, someone they called “the big guy”, running the narrow alleyways of Hong Kong being chased by literally hundreds of angry Citizens.  How the film gets there and what happens to a very sweaty Baker?  Well, you’re going to have to watch it yourself to find out.

The Brand New 2K Master is a delight.  The film has that 1970s widescreen photography with beautifully framing, zooms, and pullbacks that look wonderful on Blu-Ray.  The handsome image is sharp with nary a blemish or scratch.

The all-new commentary by film historians Howard S. Berger and Chris Poggiali is an entertaining and informative track both of whom at the top of the track calls the film “great”.  Details include a discussion of Robert Clouse’s career, the lack of a large release, their personal reflections on seeing the film for the first time, the breakdown of the story and specifically Joe Don Baker’s character and lack of motivation, the music of Lalo Schifrin, the work and career of Joe Don Baker, a surprising comparative to The Killer Elite, the work and career of Elizabeth Ashley, the lack of any mention of this film by the actors or behind-the-scenes crew, how this came to be an AIP production, Berger’s admission that he’d seen the film as a kid in its theatrical run 5 to 6 times, the alternate name for the film, the quick TV premiere, the use of locations in the film, multiple films that are of similar ilk they’ve watched together (get your pen and notebook out as they give out about 8), the career and work of Jim Kelly, some great information about behind-the-scenes about Enter the Dragon, the appearance by Burgess Meredith, the various Martial Arts/Stunt Performers that got their start in this film and went onto more films with director Clouse and other films, the editing of Michael Khan, the repercussions of Bruce Lee’s passing, and more.  Because of the lack of information on the film, Berger and Poggiali do a great job of discussing the film and adding personal accounts of this film and the films of the time and martial arts milieu of the 1970s.

Image Gallery (3:08) – 31 images that consist of Posters and Production stills.  Lalo Schifrin’s opening title music plays over the image gallery that plays automatically.  Unfortunately, there isn’t a way to navigate through the pictures.