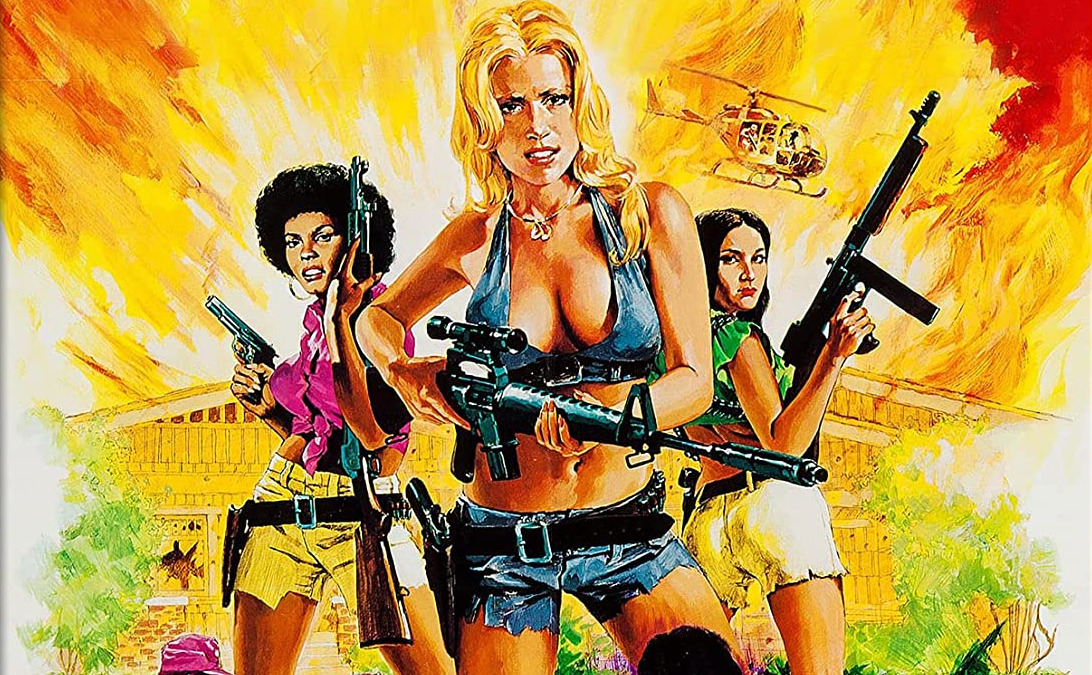 Revolution in Southeast Asia as a trio of unlikely Female heroes team up in AIP’s 70’s Grindhouse Actioner Savage Sisters.  New to Blu-Ray from Kino Lorber.

The plot description off of the back cover was just too good.  I couldn’t write anything better than this which feels like its straight up from a grindhouse trailer;

Meet the Savage Sisters—three of the world’s deadliest women. Gloria Hendry (Black Belt Jones) is the Colonel, lean, mean, and foxy, with plenty of ammunition stacked in just the right places. Cheri Caffaro (Too Hot to Handle) is the Field Marshall, who took command of the Liberation Army to save her men. Rosanna Ortiz (Savage!) is the Brigadier General, top mama of a female commando unit. They’re trouble multiplied by three—and they’ve got plans for a spectacular jailbreak, a million-dollar robbery, and an island revolution.

The standout here is Sid Haig.  The screen legend plays a treacherous double-crossing bad guy who appears to be Mexican (the clothing and Haig’s touch-and-go accent indicate such).  Haig is having such a good time relishing every line and villainous act that one cannot see it as anything but a bit of genius comedic performance.  The funniest aspect of the film is just how stupidly trust everyone is of Haig’s character even when he’s laughing maniacally at them. For those that are looking to fill up a gap in their Haig filmography, this one is definitely a standout, albeit very very weird.

As with any grindhouse film of the era, specifically the ones made by AIP, we have a mixed bag.  But the mixed bag is oh so much fun and weird.  The film is shot and feels like a true-blue Women in Prison flick just without and of the free-for-all sexual assault and nudity.  Though there is quite a bit of kink and suggested nudity and torture.

Though director Romero spares nothing of the wanton violence on display.  Which are often times effective in that ‘everyone shoots from the hip and only the heroes kill people” sort of way.  Though the ending and how a villain is dispatched are highly effective and stylishly shot by Romero and cinematographer Justo Paulino.  As anyone knows who’s watched a significant amount of ‘70s era grindhouse features and specifically AIP anytime there are women in danger it’s going to be set in the jungle – the real-real jungle.  Here that setting is as effectively used as other coastal settings they use as well.

Savage Sisters manages to not reach the delirious – and troubling – heights of other Women in Prison films but in its own strange way it excels.  One couldn’t ask for anything more.  Well, maybe more Sid Haig.  Any film grindhouse or not could always use 25% more, Sid Haig.

The brand new 2K Master is a minor miracle.  The handsome sharp transfer is nearly flawless.  The color reproduction, film grain, and contrast levels are nearly perfect.  The film has probably never looked better, even in its initial theatrical release.

The all-new audio commentary by Horror-Fix.com’s James G. Chandler and Ash Hamilton is a loose, fun, informative affair.  Some of the details include why productions went to the Philippines, the stock soundtrack that is used, the use of Sid Haig, the use of the military and its equipment at the time, the use of non-stunt performers to do stunt work, the terrible conditions that the actors (specifically the female performers) had to endure, the work of Rosanna Ortiz and the lack of release Stateside of her work, the skill of director Romero, how the skill and talent changed in action films with the rise of DTV in the 1980s, how the dynamics changed in this film as opposed to other Women in Prison films of the time, the lack of nudity in the film – which was typical of the genre, and much more.

Savage Sisters is a grindhouse oddity that fans will want to see or revisit in this new Kino Lorber package.  Recommended.