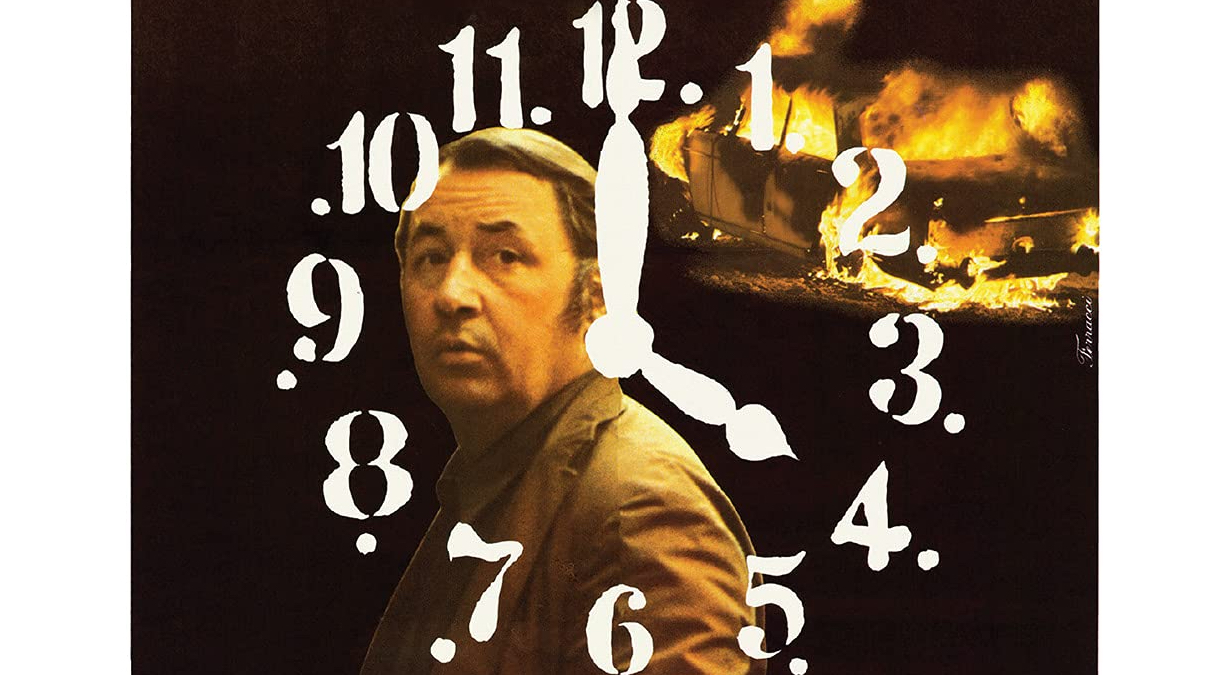 Director Bertrand Tavernier’s masterful drama The Clockmaker of Saint-Paul comes to Blu-Ray thanks to Kino Lorber filled with great extras.

The Clockmaker of Saint-Paul rejects all the norms of a crime film and creates a quiet but searing drama of fathers and sons and the generational divide.

When Michel Descombes (Phillipe Noiret) quiet life is turned upside down when his son Bernard (Sylvian Rougerie) is accused of murdering a police officer.  Michel is besieged by all sides be it the press, his friends, people on the street.  In fact, the only person that seems to have any empathy is Inspector Guilboud (Jean Rochefort).  As Michel begins to quickly realize he did not know his son at all, he begins to the cracks in Paris society and politics.

Tavernier’s deeply personal film can be a shock to the system if one is expecting this to be an exercise in genre and exploitation.  The Clockmaker of Saint-Paul is neither but a film that takes the conventions; lovers on the run, a supposed crime of passion, a manhunt and places them all off-screen.  By doing so and focusing on a simple father and the repercussions his son’s choices have on his life creates a powerfully moving portrait of a man under pressure.

The performance by Phillipe Noiret as the father is simply amazing.  The way that Noiret understands stillness and quiet and the timber of volume should be studied by all actors in any language.  The way that Noiret’s performance is always emotions that are physically embodied by his expression on his face is astounding.  One needs to look at his work with Jean Rochefort as a study in just how powerful Noiret can be.  The looks and physicality he brings to those moments that go from confrontational to personal to emotional never become arched or melodramatic is all keyed off of Noiret.

The Clockmaker of Saint-Paul looks wonderful on Blu-ray.  The transfer provided to Kino from StudioCanal appears to be the same one that’s been on Blu-ray in Europe for some time.  The transfer beautifully reproduces the grain structure and sharpness of the film image.  The washed-out color and color reproduction after reviewing other sources appear to be Tavernier’s intended look.

Introduction by Walter Hill (2:17) – Kino does state that the introduction was recorded before director Bertrand Tavernier’s passing.  Hill does a great job of giving context to this special film, and also giving us a bit of insight into the man that director Tavernier is/was.

The archival commentary by director Bertrand Tavernier is an informative track that he recorded in English.  Details include a funny anecdote of working with his small daughter in the opening scene, the discussion of Politics in the film (which is a rarity in French Cinema), why he chose to change the location of the novel from America to Lyon France his hometown, the issues with another actor and the hiring of the legendary Jean Rochefort instead to much great success, the autobiographical nature of the film and how that was informed by his co-screenwriters, how he finds actors by going to the theater and also watching films, the single-action/fight scene and how they only did one take and it was because Noiret hurt the stunt man, the adaptation and how much was changed and how much he placed from his life into the film, editing the film and the problems with the footage, the work of Christine Pascal and her work as a director and co-writer on a few of his films, and much more.  The commentary track is a deeply personal look at the making of this film and film production of the era.

Interview with Tavernier and Philippe Noiret (42:21) – this archival interview from 2001 begins with Tavernier telling a story of the first film he tried to make and underhanded dealings caused its collapse.  Details include the political climate in which the film was made and helped develop the point of view that the film had, the films that he watched that inspired him, Tavernier and Noiret’s relationship and how they were personally similar, the production of the film itself, the way that they both wove their experience into something that was not only politically complex but a passion project for both, and much more.  This wonderful deep dive into the movie is exactly what you expect from a serious French interview about an Important Film.  French with English Subtitles.

Interview with Tavernier (48:09) – this archival interview from 2008 begins with Travernier discussing the reason for his late start of his feature film career as a director and his honest and well-critiqued reason, a great suggestion of from his wife.  Details include how he became a press agent and his experiences as a Press Agent in France which is very different than in America, his writing, other projects that included one about the French Gestapo, the connection of the French Gestapo with the French Criminals because many of them worked with the Nazis, some of the issues he had with a particular director and his tyrannical actions and how it changed with the French New Wave, his relationship with Truffaut, how controversy arose as Tavernier chose to use actors and creatives from the 1950s in France similar to using Black Listed Creatives from the US, the influence of the film Deuce on his films, the writing of Georges Simenon and what attracted to him the work, and so much more.  There is some crossover from the Travnier and Noiret interview.  English without subtitles.

Finally, they’ve included a Booklet with the disc.  I would not normally mention this but it does include excerpts from Tavernier’s memoir. Reading this small portion from his memoir on the film will make you want to search out more of the director’s writing.

The masterful drama has been given a proper release in the US by Kino.  Recommended!!!