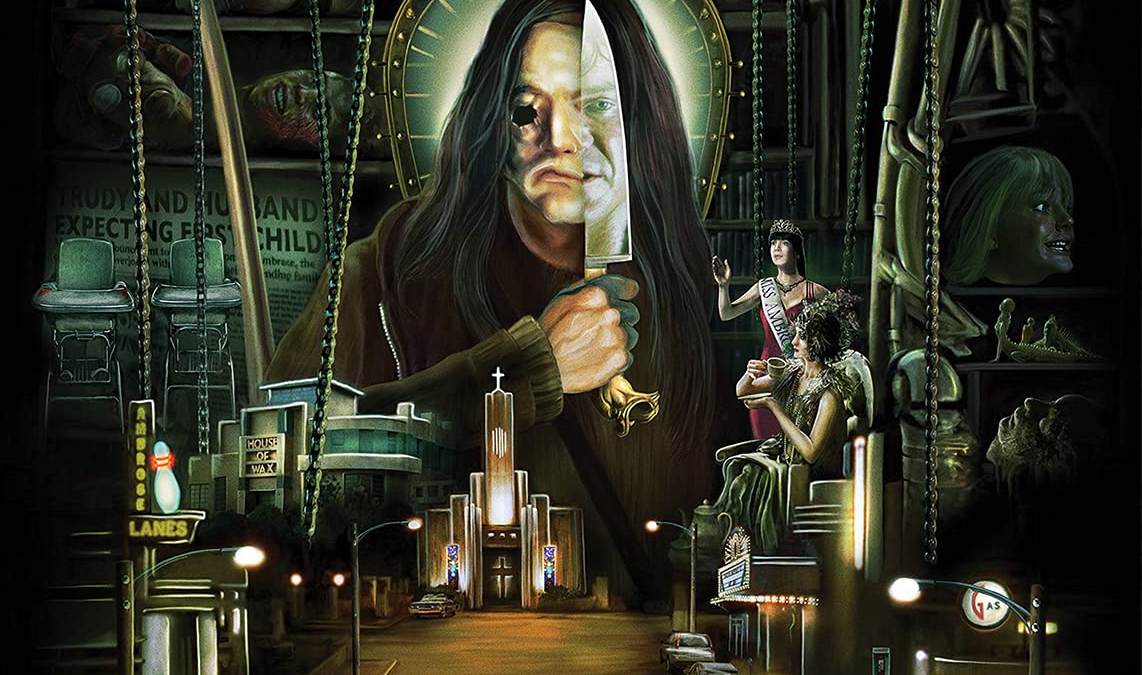 Another Dark Castle remake of a classic horror film.  House of Wax is definitely not the Vincent Price 3D original.  Scream Factory has pulled out all the stops for this collector’s edition Blu-Ray.

As remakes go, House of Wax fails.  As Horror films go, House of Wax is interesting.  The remake changes so much in its “reimagining” of the Vincent Price original that its RINO*.  That doesn’t mean that Jaume Collet-Serra does bring his usual stylishly high camp vision to the proceedings.

A group of Thirty-somethings (teenagers in Hollywood Stuido System Productions of the mid-00’s) are off to see the College Football game of the year.  Of course, there’s drama before the wax begins to pour.  Carly (Elisha Cuthbert) is trying to end things with her beau Wade (Jared Padalecki).  Nick, Carly’s brother (Chad Michael Murry) fresh out of prison is along for the ride.  Paige (Paris Hilton) and her boyfriend Blake (Robert Ri’chard) seem to be there for the football and partying.  There will be no partying or football.  What is there?  Serial killers, wax, creepy wax but not wax figures, and torture (it was 2005 after all).

Here’s what no one is ready to hear.  Paris Hilton is one of the best things about this film.  The proverbial knives were definitely out fifteen years ago when this debuted.  Everyone had their “oh-so-cute” barbs ready for Hilton.  The film doesn’t help with every joke at her expense is one involving a camera or sex or both.  The truth is that Hilton knows exactly the film is in, and because of her understanding, and turns in a relatively savvy performance.  From the opening moments to when she’s being chased and hunted by the killer Hilton is effective as Paige.  Anyone that says differently or tries to compare to other actors that were slasher fodder are diluting themselves.

It does help that Jaume Collet-Serra understands a particular brand of filmmaking and has the ineffable deft touch to campy horror films that are not really campy.  Collet-Serra shoots the film like a perfume ad which is both a savage critique of the Texas Chainsaw Massacre remake and a completely sober choice.  The film benefits from the beauty that he approaches the film as much of the script by Chad and Chris Hayes is lacking and pedestrian.  Though there are moments, the cutting of the fingertip being one of them, are clever “grace notes” for horror fans.

Ultimately the film’s final third act turn is not surprising as it’s been telegraphed well in advanced but that does not matter as Jaume Collet-Serra and his expert technicians go all out in a truly disgusting and oddly beautiful finale.  Even with its veering off everything from the original, its slasher clichéd script, lack of originality, House of Wax manages to be a visually astute piece of horror filmmaking.

The new 2K Scan of the Interpositive will delight fans of the film.  The contrast and black levels are reference quality.  The transfer is sharp and filming with a nice grain structure.  The updated Dsic compression and healthy bitrate help make this edition run circles around the original Blu-Ray release. Scream Factory has definitely impressed with this release.

Die, My Darling (8:04) – is an all-new interview with actor Paris Hilton.  Hilton discusses how she was cast, the make-up FX work, and much more.  The actor is very excited discussing her film debut.  Some great B-Roll footage of behind the scenes of making the film.

The Tale Of Blake And Paige (5:22) – is an all-new interview with actor Robert Ri’chard.  Ri’chard discusses how he came to be cast in the film, the script revisions that continually came, working with Paris Hilton, and more.  Some great B-Roll footage of behind the scenes of making the film.

To Me, They Live And Breathe (9:02) – is an all-new interview with Makeup Effects Artist Jason Baird.  Baird discusses, via Zoom interview, how the Line Producer brought him on and working with KNB Fx in Australia, making actual wax figures, how they created the actual layered FX of wax and human, some great tricks they used to achieve the look of the film, and much more.  Baird gives some great details on how some of the FX in the film was achieved.  The interview does include some great footage of the FX being created.

Organ Grinder (6:01) – is an all-new interview with Composer John Ottman.  Ottman discusses how composing a score on a lower budget feature, his approach to the score, his use of a full orchestra, and much more.

Roll And Bloopers Video Cast Commentary (26:32) – in this archival featurette Elisha Cuthbert, Chad Michael Murray, Jared Padalecki and Paris Hilton discuss the B-Roll footage from the production.  The best moment is Hilton and company discussing her kill scene.  Surprisingly there is a bit of information between the different small personal interactions between the actors.

From Location: Joel Silver Reveals The House Of Wax (1:32) – is an archival featurette with Joel Silver in full on velvet track suit, while on location for Kiss Kiss Bang Bang, discussing House of Wax and premiering the trailer.  The gag in the middle and end of this is pretty hilarious and worth the watch.

Wax On: The Design Of House Of Wax (7:25) – is an archival featurette discussing the production design done by Graham Walker.  There’s some great production art that references Asmara (and Italian designed town in Eithopia), b-roll footage of the town and more.  Comments by Walker, director Collet-Serra, producer Silver,  producer Susan Levin, producer Herb Gains, and more.

The House Built On Wax: The Visual Effects Of House Of Wax (10:11) – is an archival featurette discussing and examining the various visual and makeup FXs and how they were achieved.  There’s some great split screens, b-roll footage of how FXs were achieved.  The featurette is suprising thorough going through the various set pieces and how they created them.  Comments by director Collet-Serra, producer Silver, producer Gains, VFX supervisor John Breslin, producer Levin and more.

Vintage Interviews With Cast And Crew From The Electronic Press Kit (19:45) – It breaks down into 90 second clips of Elisha Cuthbert, Chad Michael Murray, Brian Van Holt, Paris Hilton, Jared Padalecki, Jon Abrahams, Richard Ri’chard, Jaume Collet-Serra, and Joel Silver discussing the movie followed by a 3-minute EPK featurette.  This does come with Chapter Stops for each of the crew members and the EPK.

Theatrical Trailer (2:21) – the trailer appears to have been remaster for Blu-Ray.  Nice little added bonus.

House of Wax is an interesting remake in the hands of director Jaume Collet-Serra. Scream Factory has loaded the disc with a great transfer and new special features.  Recommended.