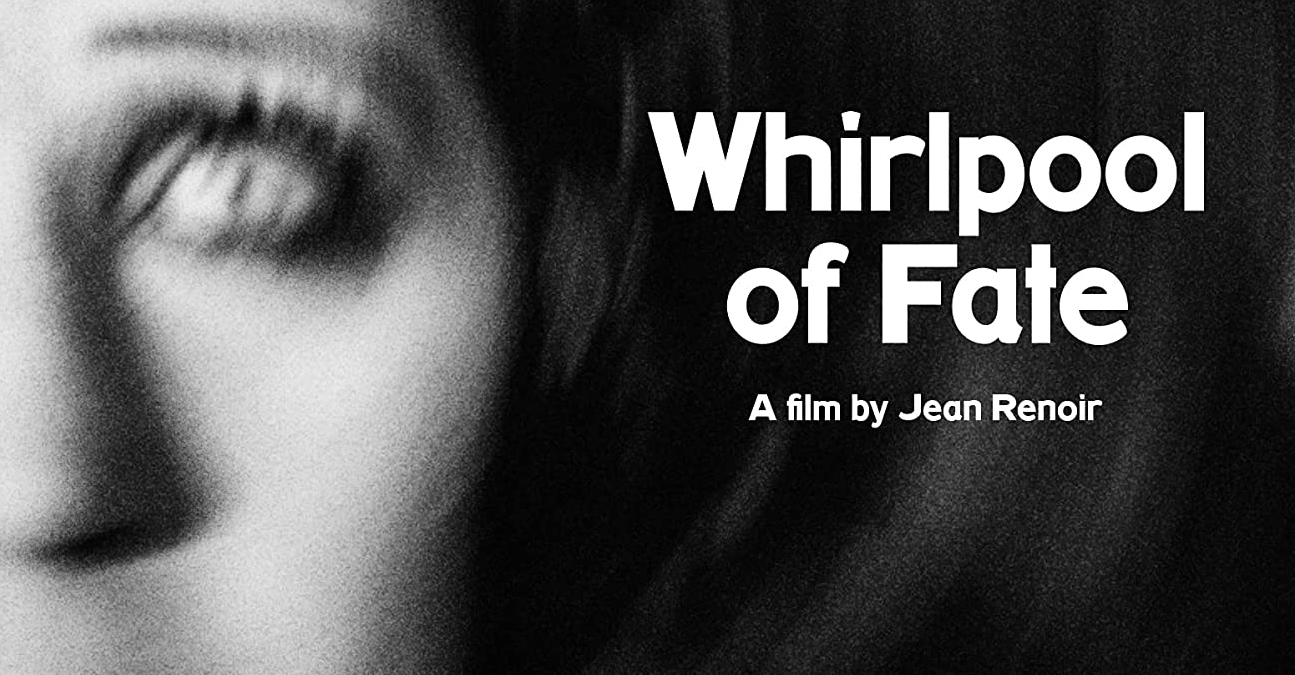 There must be an understanding when one watches a silent film.  These are the films from the infancy of cinema.  Through that understanding, one can glean much from any surviving film of the era.  Jean Renoir’s directorial debut Whirlpool of Fate is one such film.

A melodrama about a young woman’s trials and tribulations after the passing of her father.  From a lecherous uncle to criminals, to caravanning nomads, to townspeople, all seem to want to prey upon the young pious woman.  The woman is abused, cast out, chased in the woods, left for dead, saved, found, chased away (again), only to be saved.  All in the name of melodramatic social realism. Plus, there’s a dog!

Renoir’s film isn’t the plot as it is the feeling and visuals.  Produced for no money, with non-professional actors, at a friend’s estate the film even with these issues arises to more.  Self-assured visually with a camera that moves with confidence the film though simple never needs an ounce of dialog or even the expository title cards to understand the emotional truth of the film.

Later works would of course delve deeper into social themes of class, crime, and society as a whole.  Here if one looks they can see the inkling and DNA that would become classics like Rules of the Game.  Not as refined but as acutely aware of how to push and pull an audience, Whirlpool of Fate is a definite must-see for any cineaste.

Kino’s presentation of the StudioCanal and La Cinémathèque Française restoration is vital and essential.  Whirlpool of Fate’s gorgeous nitrate black & white cinematography makes its way to Blu-Ray wonderfully.  Of course, there are scratches and dirt, which is to be expected from a 97-year-old film.  The transfer itself is handsome and sharp (not surprising to those that have seen a beautifully restored silent film).

The commentary by Nick Pinkerton is using various sources including Renoir’s own autobiography, Andre Banzan’s critical work, Raymond Durgant, Pascale Mérigeau’s biography is a deeply researched academic track.  Pinkerton guides us through the film, how the film came about, Renoir’s early life and childhood, his time in the Army, his time as a pilot, his relationship with his equally legendary painter father, the actors (who were mostly friends and colleagues of Renoir), the director’s use of water, Renior’s relationship with actor Catherine Hessling, Renoir’s love of American Filmmakers DW Griffith and Ceil B DeMille, the personal anecdotes from the director’s life both personal and artistic with Hessling, and much more.  Pinkerton’s commentary is vital for an understanding of how Renior’s work would evolve and the touchstones inherent within this directorial debut feature.

The score by Antonio Coppola is appropriately designed to feel as though it was composed for the era.  The piano based score is beautiful in its simplicity and execution.

Whirlpool of Fate shows us a filmmaker in his infancy who would later create truly classic films.  Recommended.