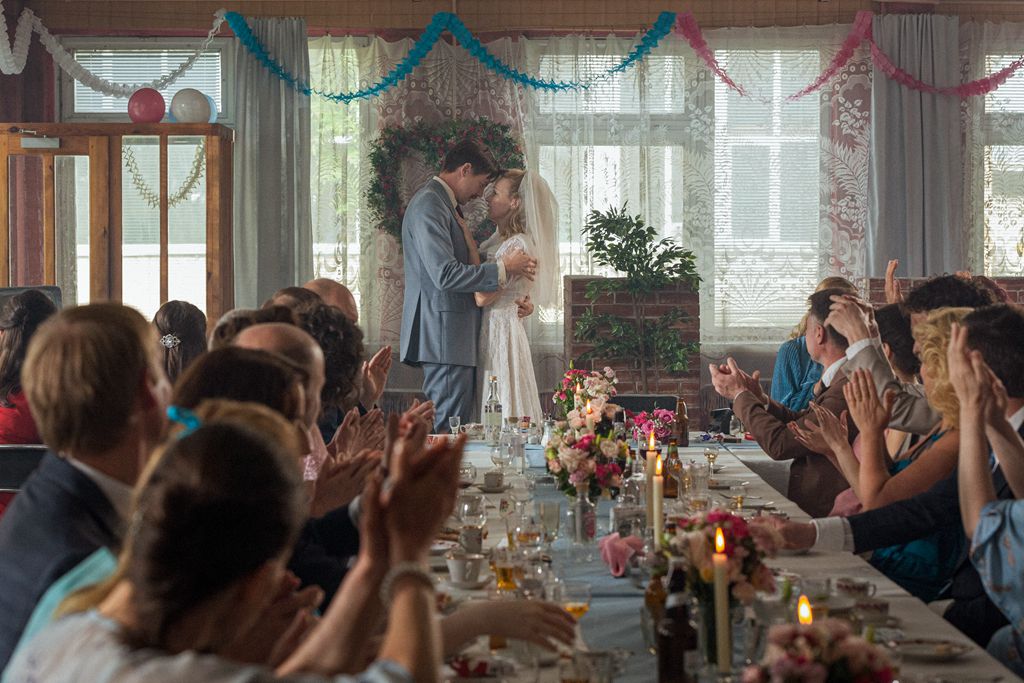 If you share your wedding day with Lady Diana and Prince Charles are you, too, entitled to a fairy tale romance?  Diana’s Wedding wants us to know that love will find a way.

Sometimes you don’t need a heavy-handed existential drama for your Sunday afternoon entertainment. Sometimes all that’s needed is a neat romantic comedy featuring a couple of good performances from the main or supporting cast, while perhaps quietly giving the viewer something to think about on the way to work the next morning. Diana’s Wedding may just fit the bill.

On the same day that Lady Diana Spencer marries Prince Charles in London – 29th July 1981 – Liv (Marie Blokhus) and Terje (Pål Sverre Hagen) celebrate their own wedding. While the royals party in the palace, the Norwegian newlyweds bring their families (including their baby daughter Diana) to the factory canteen where Terje works, for their wedding dinner.

The film then follows Liv and Terje, and their neighbours Unni (Jannike Kruse) and Olav (Olav Waastad), through the next couple of decades of married life. And as Diana grows up, she has to navigate her own way through her feelings toward relationships and marriage, which have been coloured by her experiences of watching her parents’ and neighbours’ choices. Just like Lady Di, it’s a bumpy ride.

For a change, Diana’s Wedding is a distinctly non-glamourous romantic comedy. Liv and Terje are a working class couple and take their camping holidays in neighbouring Sweden, while the aspirational Unni and Olav big up their holiday in Majorca which they view as the height of luxury. Nobody has cash to splash on fancy dinners or grand romantic gestures, and this focuses the viewer on what is actually holding the couples together – for better and for worse.

For me, the stand-out performances come from Pål Sverre Hagen, as the well-meaning but sometimes thoughtless father, and Jannike Kruse as the beleaguered wife next door. Hagen’s easy manner and quick smile hide a mass of insecurities which, as the man of the house, he is not allowed to show and which land him in trouble way too often. And Kruse is funny and sad without being pathetic, even when turning to drink to escape the overbearing yet weak husband she has ended up with.

Because it covers several decades in its tidy runtime of 87 minutes, Diana’s Wedding does end up rolling to its conclusion quite swiftly once Diana is on the verge of adulthood, and the ageing makeup lacks a little finesse. But it did not go quite where I thought it would, which was a pleasant surprise.