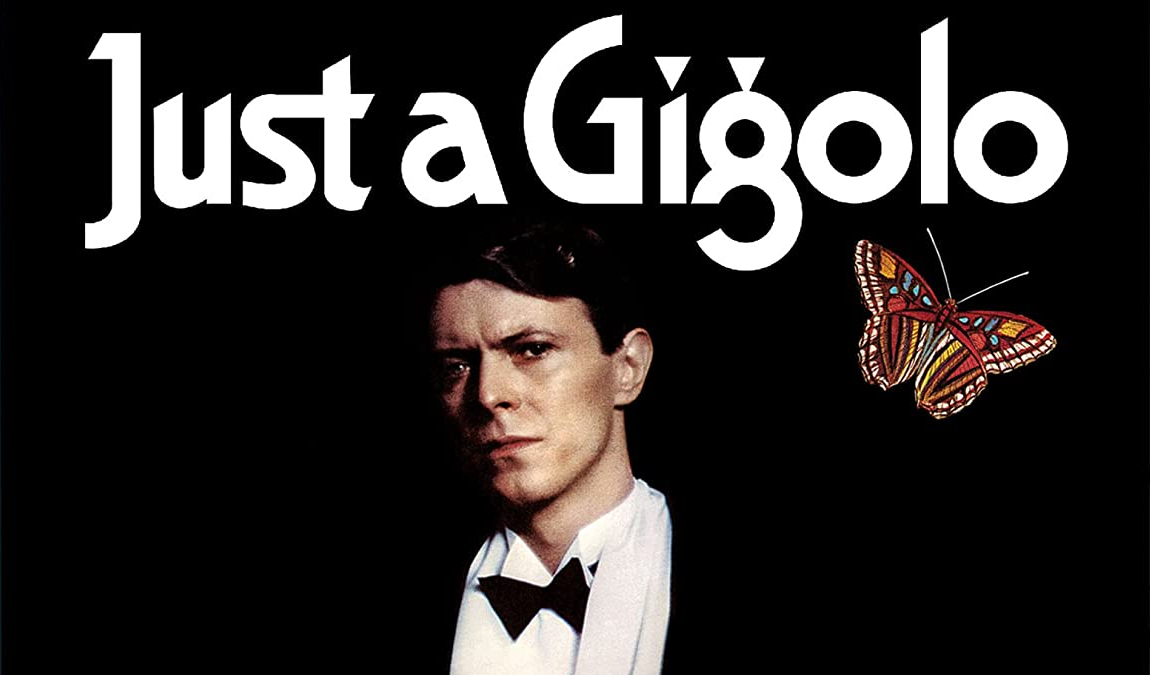 Just a Gigolo finds a forgotten David Bowie’s performance in a cynical tale of a young man unprepared for the harsh realities of post-WW1 era Berlin. First time on Blu-Ray from Shout Factory.

Some films are perfect.  Some are terrible.  Most are average.  Rarely you get a fascinating film that works in some respects and doesn’t in others.  Just a Gigolo is one of those.  Part dream, part nightmare.

Paul Ambrosius von Przygodski (Bowie) is wound by an explosion during the waning days of WW1.  He comes home to Berlin to a catatonic father, a mother working in the Turkish bathhouses, their home into a boarding house.  Paul attempts to survive moving in and out of identities in the way people change clothes.  His former commander (David Hemmings) wants him to join the Communists.  A Baroness (Marlene Dietrich) wants him for her harem of gigolos. All the while Paul unable to make any decision for himself watches as the world gets darker and darker with the rise of the Nazi party.

Bowie is amazing at Paul dazed and delicate hero.  The actor makes inaction an art as there is a stillness that is imbued in everything that Paul does.  Even in a panic being chased by a mob holding a young pig Bowie’s Paul is hauntingly inert.  Like a walking waking ghost unable to accept his fate on the battlefield but also unable to accept the living in the haunting time of transition to fascism.

The film directed by David Hemmings has a dream-like logic that does belie the inconsistent nature of the narrative.  There are jumps and shifts in time that somehow work in spite of missing large chunks of narrative.  The script continually asks if Paul is dead, only aiding in the ethereal quality of the proceedings.   The visual tone set by Hemmings and director of photography Charly Steinberger also adds to the dream as well.

Just a Gigolo is a haunting piece of work that will affect long after the first viewing.

The transfer provided to Shout Factory is decent quality.  The image is sharp and has a wonderful patina of grain.  The quality is far superior to any VHS or non-region DVD released.

The all-new commentary by assistant to the director Rory Maclean.  Beginning with a quote by Jean-Luc Goddard is a deep dive into the making of the production.  Maclean does a great job of giving us technical details of the production and more.  Details include working with Hemmings, working in (West) Berlin at the time, the relationship between Hemmings and the producers, personal asides about Bowie; including discussions with Bowie about a Ziggy Stardust musical that never way, creation of a song, and discussions about music, movies and more, Iggy Pop visiting Bowie during the production which includes some great anecdotes told by Pop about Bowie and about Pop himself, discussion of some of the more interesting places Bowie loved to haunt in Berlin, the legendary Marlene Dietrich, the troubled post-production and the reasons why it was troubled, working with Dietrich on the musical moments, and much more.  Maclean delivers all this great technical and personal information about the production in a beautifully poetic tone.  There is so much discussed beyond what I have listed here Maclean gives us a very honest account of the film.

The Making Of Gigolo (28:41) – is an all-new featurette with Producer/Writer Joshua Sinclair and Assistant To The Director Rory Maclean.  Sinclair begins with a discussion of how the script came to existence in 3-weeks.  Maclean begins with a frank discussion of David Hemmings lifestyle at the time the film was being produced.  Details also include how expensive the film was, how Hemmings came onto the film, how Sinclair came about as a producer on the film, how Kim Novak was cast, how David Bowie was cast, how Marlene Dietrich was cast, how Bowie and Dietrich never met because of scheduling conflicts, Dietrich singing in the film and behind the scenes and some wonderful/beautiful/sad anecdotes, and much more.