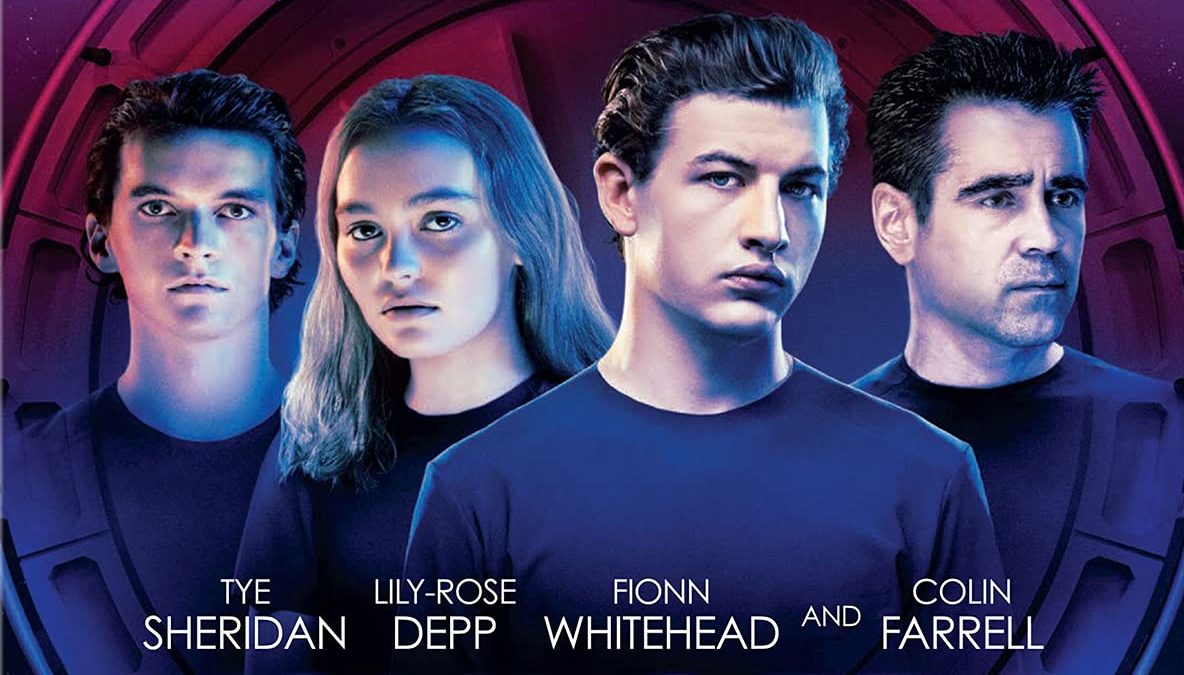 Neil Burger continues to surprise this time with a space set sci-fi thriller Voyagers.  New to Blu-Ray from Lionsgate

The unexpectedness of Neil Burger’s films is still present in Voyager.  It begins as a clever riff on Lord of the Flies… set in space and becomes as all good science fiction becomes about more.

Years in the future we find an M Class planet (aka life-sustaining planet for those not-so-science geeks out there).  Any manned mission to this planet will take 86-years.  Rather than postulate cryo-sleep, they genetically design a crew that will eventually have children and their children will continue the mission until the planet is reached.  This plan is overseen by Richard (Colin Farrell) a scientist so committed that he goes with the children into space.  In space after a decade the children now teenagers continue with their daily routines and tasks aboard the Humanitas, the ship bound on its 86-year mission.

By chance, Christopher (Tye Sheridan) finds something in their daily water supply.  This turns out to be more than Christopher or his friends thought.  After an unexplained accident occurs, it leaves the teenagers to fend for themselves.  Quickly though attitudes turn complacent, and actions turn violent. Christopher, who was in charge, is now facing a mutinous and possibly lethal crew headed by Zac (Fionn Whitehead).  Christopher with only a few allies, including Sela (Lily-Rose Depp) must choose to face violence with violence or find another way to gain control of a wild crew bend on destroying everything.

Much like The Illusionist and Limitless Burger’s latest films is so much smarter and entertaining than one will give credit for by the trailer.  Voyager is a riff on Lord of the Flies but knows exactly what to do with that as a jumping-off point.  Rather than play out the same machinations and making the same points the film makes more modern relevant points about society.  All the best science fiction is merely a reflection of its times and Voyager adroitly takes so many of our current social anxieties and ills and puts them on display.

Much like Burger’s other films, this is not only aided by his adroit script but the equally smart casting.  By going with talent over marquee power Burger’s movie has given us a murder’s row of great young talent that shines throughout.  Even the casting of Colin Farrell is thoughtful to the performative nature of the piece rather than box office clout.  Farrell as the fatherly scientist gives us the gravitas needed and the vacuum of it when the time is right.

Sheridan and Depp are perfectly cast as the heroic teens placed in a dangerous situation.  Both actors shine in their roles that require more of them than just good looks and navel-gazing.  Sheridan continues to make the jump from a young neophyte to a mature actor with intelligence and grace.  As Christopher, there is a humanity and caring rarely seen in the genre.  Often times leads are hard-charging badasses.  Burger’s script and Sheridan’s performance side on a fascinating non-action character.  Depp is equally as impressive as the ship’s Medical Officer Sela.  Though it appears that she begins as the third part of a triangle, Burger’s script offers her more to do than you initially expect. Depp thrives in the role giving life and an urgency to a role that could have been “the girl”.

Their performances are aided by the truly impressive work of Fionn Whitehead.  The young actor who turned nervous into a piece of beautiful performance in Dunkirk here shines as the deeply disturbed Zac.  It isn’t that Zac is purely evil, Whitehead is so charismatic in his performance that elevates the role.  Zac finds his purpose and power when things start to go wrong, he finds that in his charisma he can turn things to his own will.  How Burger’s script takes that and twists its adding fuel that begins with petty slights turns Zac is one of the smartest pieces of character in the entire film.

It would be all lost if Voyagers descended into the normal action film troupes of “Us” versus “Them”, but it isn’t as binary as that.  Burger’s sharp direction and script ensure that even as he uses the troupes and conventions of the Sci-Fi Space Genre it never feels cliché.  In an era of quick shortcuts and messages that are unearned platitudes, Voyagers works overtime in making sure that it deserves its statement of possible hope in humanity.

The film was shot using Sony Vince Camera systems with a quite complex array of LED Lighting.  The results are a striking image that is translated to Blu-Ray beautifully.  The translation of a 6K raw image to a 4K DI for release to 2K Blu-Ray shows the spectrum of detail, contrast, and color, the 4K UHD must be jaw-dropping.

Born for This: The Cast of Voyagers (11:12) – is a featurette focusing on the script and the casting of the film.  Comments by Burger, Sheridan, Depp, and more.

Against Type: Unlearning Human Nature (7:21) – is a featurette focusing on the themes of the film and how complex the creation of a performance was because of the story.  Note one should not be watching this before seeing the film as it does have minor spoilers.  Comments by Burger, Depp, Sheridan, acting crew coach Billy Budd, and more.

Survival of the Fittest: The Physicality of Voyagers (4:38) – is a featurette focusing on the alien of the film and how this translated to fear and the physicality of the film and how Burger approached the stunt work.  Note one should not be watching this before seeing the film as it does have minor spoilers.  Comments by Colin Farrell, Burger, Depp, Fionn Whitehead, stunt coordinator Jordi Casares, and more.

On the Surface: The Visual Style of Voyagers (9:42) – is a featurette focusing on the production design, VFX, and cinematography; focusing on the problems and references they used.  Comments by Burger, Sheridan, Farrell, Depp, Whitehead, supervising art director Kevin Houlihan, director of photography Enriqie Chediak, costume designer Bojana Nikitovic, and more.

Hidden Chambers: Tour the Humanitas (7:20) – is a featurette/guided tour by Kevin Houlihan the supervising art director looking at the four different stages/sets (including a 200-foot hallway) that were created in Hungary for the impressive production.

Liongates Blu-Ray for Voyagers is out June 15th