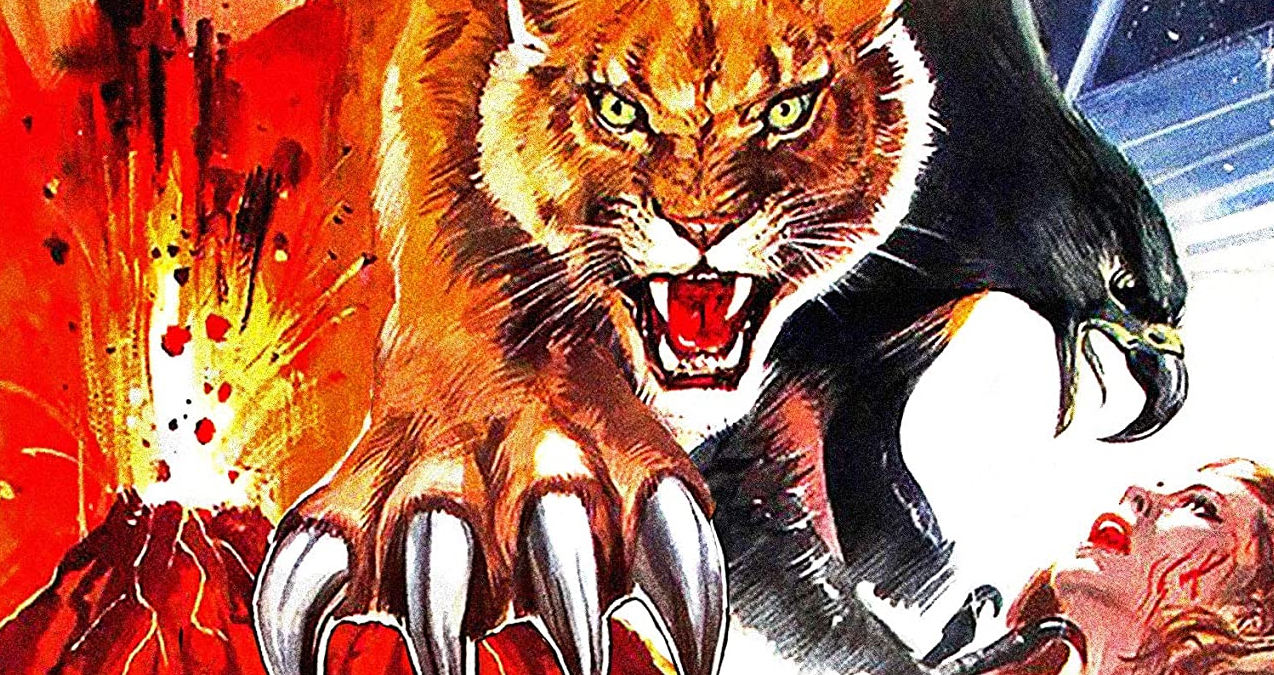 Go big or go home… William Girdler’s after the wild success of Grizzly the director double downs with Day of the Animals on his view of humanity and animals.  Severin Film’s new Blu-Ray has all the bells and whistles including a new 2K Transfer.

For some, the name William Girdler brings up a recoil of a schlockmeister that was a crass operator who made cash-in films.  For others, Girdler brings a certain sort of cache and obsessive quality to his films that make them as highly enjoyable as the aged gouda they can be.  Day of the Animals is a perfect example of the director’s overwrought style.

What begins as a simple hiking expedition for a group of city folks turns into a life-or-death situation as the Animals in higher altitudes begin to turn on humans.  Lions (mountain varieties), tigers (not so much, but Leslie Nielsen in full HAM & CHEESE MODE counts) and, Bears (definitely it’s Girdler… how can there not?) oh MY!!! It’s up to Steve Buckner (Christopher George) and his trusty co-work Daniel (Paul Manatee) to get this group filled with archetypes; a machismo filled ad-exec (Nielsen), a bickering couple (Susan Backlinie and Jon Cedar), a wealthy complainer (Ruth Roman) and her baseball-loving son (Bobby Porter), a cancer-stricken football player (Andrew Stevens), and an intrepid new reporter (Lynda Day George).  If the animals don’t kill them their constantly at each other’s throats will.

Girdler seemed to have found some sort of concoction of Deliverance, Day of the Triffids, and of course, his favorite movie ever JAWS that honestly makes for a heady brew.  The film has zero percent humor in telling its story of a near-apocalyptic natural event.  Rather Girdler directs the film as though he’s filming Revelations.  That sort of deadpan seriousness only enlivens the proceeds to a pitch that one cannot help but find humor in.

The clear winner of this film is Leslie Nielsen who at a certain point goes bare-chested Wildman Rapist.  Though one can never really see him as a threat the entire film if one has seen Airplane or The Naked Gun.  Though Nielsen never plays it with a wink and a nudge.  There is a passion to the way he plays this, and earnestness that he’s delivering something truly sinister.  That is until he meets his fate.  A fitting fate but one that feels like it’s a joke… but it’s not.

Day of the Animals has so much more to offer than this reviewer’s brief opinions and is one of those films that should be experienced before discussed.  One will be sure to have a good time if anything described or discussed above is remotely fascinating or entertaining to the reader.  If it doesn’t then there’s always Grizzly or any number of Girdler pictures like The Manitou!

Severin Films has created a new 4K master of the film.  The results are better than the film has ever looked.  The film is never going to look picture-perfect pristine, unfortunately, Girdler shot the film on cheaper late 1970’s film stock and shot quickly resulting in an image that is tricky, to say the least.  This is a similar effect that was had with their new transfer for Grizzly.  Severin has done a marvelous job giving us a transfer that puts Day of the Animals’ best visual foot forward.

The newly recorded commentary by critic Lee Gambin is an entertaining and deeply informative track about the film, the genre, and Girdler.  Details include how disaster genre sprouted the eco-horror film, the character archetypes that fill the film that have become cliché now, Girdler’s work with cinematographer William Asman, the animal trainers and how things were achieved, the similarity toward COVID pandemic with the reaction of the characters in this film, the producing career of Ed Montoro, the work of Michael Ansara and his career, the work and personal lives and activism of husband/wife actors Christopher and Lynda Day George, animal wrangler of the wolves George Toth, how the animal attacks were achieved, the screenwriters husband and wife team William and Elanor Norton including a very wild life post-screenwriting in the 1980s, the animal supplier Lou Schumacher and his work here and other films, how women are fascinating complex in not only Day of the Animal but a lot of the eco-horror films as a whole, the work and career of Richard Jaeckel, the work and career of Andrew Stevens, the fascinating work of Leslie Neilson and quite a few good recommendations, the rise during this time of animal activism, a fascinating discussion of how Benji and The Pack influenced adoption of dogs,  the career of Ruth Roman, the infamous bear attack scene, the career of Michelle Stacy, the various subgenres and history of “animals attack” genre, animal trainers Wally Cox and Dick Drake, and a great moment between Gambin and a special guest. Gambin never lets a moment rest or lull giving us a rapid-fire delivery of information in the commentary track. Note if you’re one that loves this film Gambin gives a bunch of deep-dive recommendations in the eco-horror genre.

The second commentary is archival one moderated by Harry Kingle and filmmaker Scott Spiegel with actors Lynda Day George and Jon Cedar.  Beginning with Cedar recounting a few incidents that did not endear the crew to the small town where they filmed this is a lively conversation.  Details include the working with the various actors, Christopher George’s work prior to this film, a discussion about the popular Rat Patrol, Christopher George’s idea of camping, Lynda Day George’s work on Classic Television, some great Charles Bronson stories, Leslie Neilson on set and his work after this film and in comedy, a great conversation about Jennifer Lopez and Ben Affleck’s Gigli (which is now come around to being current news at present time with the two rekindling ala Liz and Dick), Lynda Day George remembrance of Bill Paxton, meeting fans in public, being spied on during production, the work of Christopher George, and more.  Note that the commentary does have large sections of silences and the audio can sometimes be not as good as you would want. This is more of a conversation and watching it with these people than hard fact commentaries like the one Gambin.

Stephen Thrower on the Career of distributor Edward L Montoro (20:38) – a companion piece to the featurette that Thrower did for the Grizzly Blu-Ray, that discusses the career of Montoro.  Thrower gives us a detailed breakdown of Montoro’s life and career.  Details include Montoro’s early life, his early ventures moving from Los Angeles to Salt Lake City Utah, Montoro being arrested for counterfeiting (yes, counterfeiting), a plane crash, the cheaply made first features The Losers and Getting into Heaven, the business details of the creation of Film Ventures International, FVI’s picking up various Italian films and turning quick and sizable profits, the massive success Behind the Door, the court cases that ensued for the similarities to films he distributed like the Exorcist and Jaws, the work of Girdler and Montoro beginning with Grizzly, how Montoro’s criminality and greed kept payments from everyone that worked with Montoro, the lack of true success for FVI but some pickups like Pieces, his disappearance of Montoro in 1984, and more.  The featurette is beautifully produced with clips of Montoro’s work, behind-the-scenes photos, and best of all some great footage of the various films produced and distributed, and 8mm behind-the-scenes footage during the Girdler Era.  There is a lot of conjecture that Thrower dispels about Montoro’s life with his deeply researched discussion.

Nature Boy (17:49) – is an all-new interview with Actor Bobby Porter who plays the kid in the film.  Details include how he got the job (his thought being that he was 18 and looked a lot younger), working with the cast including Ruth Roman, Michael Ansara, Leslie Neilson (including the stunt work he was hired for during his harrowing moment with Neilson), Christopher George, Andrew Stevens, working with the various animals, and much more.

Against Nature (12:55) – is an all-new interview with Actor Andrew Stevens.  The actor discusses the casting process and getting the role of Bob Denning.  Details include memories and anecdotes of Girdler, working in the mountains, the production itself, and much more.

Monty Cox Unleashed (18:10) – is an all-new interview with Stunt Coordinator Monty Cox. Beginning with how Cox got involved with animal wrangling with a great story about his father and sky diving.  Details include his first interactions with lions and tigers and how it got him hired, how he got the job on Day of the Animal over other seasoned stunt coordinators, the difficulty of the production, the prep work done for the animals, how he took over as 2nd Unit Director, how he was unfamiliar with most of the animals and how he approached the work with them, a great story about a bar and one of the grips that gotten beaten up, the infamous bear wrestling scene he doubled Neilson for, another great story about a vulture, and much more.

Something Was Out There: Day of the Animals 30 Years Later (21:44) – is an archival making-of featurette with interviews with Actors John Cedar, Paul Manatee, and Actress/Animal Trainer Susan Backlinie.  This making-of featurette made during the prime DVD days is a proper making of similar to the one that appears on Grizzly. Details include Backlinie was not just cast but did stunt work and animal wrangling, how the stunt work was achieved, how Monty Cox was bit during a stunt, the snakes biting stunts, the rats stunt work, the bear wrestling scene, how Cedar was injured on set, working with Christopher George, and much more.

Alternate Opening Title Sequence Something Is Out There (0:38) – the opening title sequence with its alternate title.

Radio Spot (0:28) – the single radio spot plays over the poster for the film.

TV Spots (1:27) – three TV Spots, two spots with Day of the Animals as it title and one with it’s alternate title Something is Out There

Trailer (1:12) – the overheated voice over narration is worth watching this trailer once.

Day of the Animals is a terrific cult classic.  Severin has done a marvelous job of giving us a great Blu-Ray filled with great extras and a wonderful transfer.  Highest recommendations!