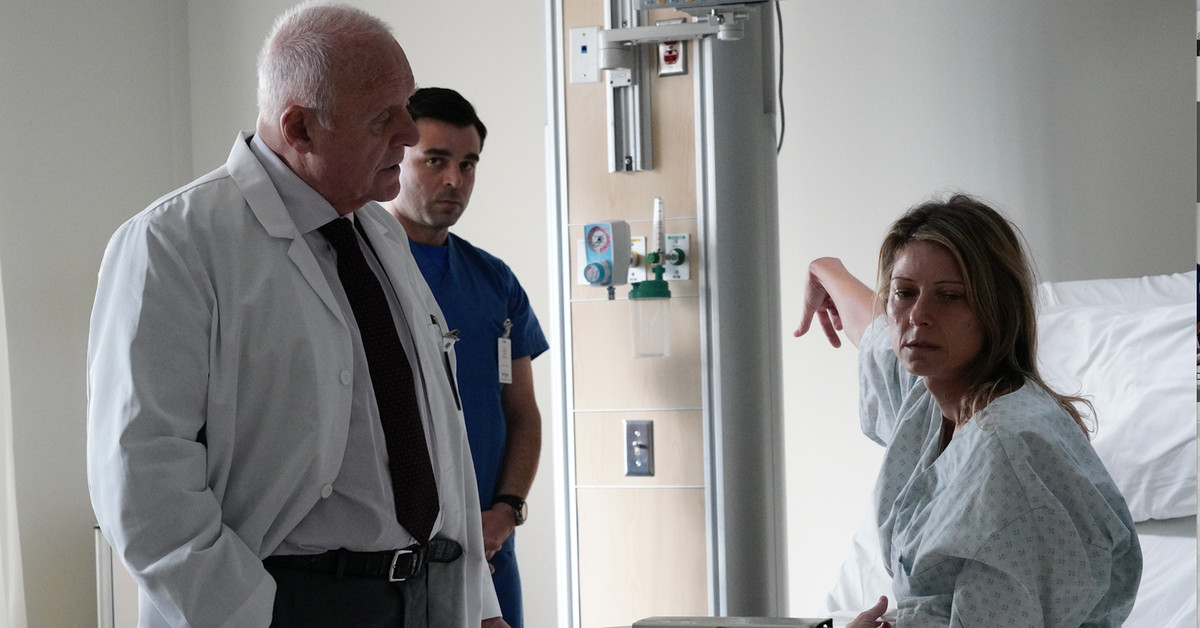 Sir Anthony Hopkins is always going to be a name who draws attention to a film. Sometimes it may have been better not to.

Elyse is the feature directorial debut of Stella Hopkins and is a film which makes use of colour and black/white imagery to delineate various moments in the experience of the eponymous Elyse Bridges.

Sir Anthony Hopkins is first-billed but plays the supporting role of Dr Lewis, whose patient is Elyse (Lisa Pepper). Elyse has an apparently idyllic life, living in a beautiful home with a caring husband, lovely little boy and live-in nanny. But she is clearly suffering with mental health issues, and, in a film of two halves, things come to a head at a dinner party when she causes a highly embarrassing scene in front of several guests in her home.

The first part of the film is in black and white, which one presumes is to emphasise Elyse’s isolation and emotional frailness. She wafts around her house, garden and local park looking lost and lonely in monochrome; it has the effect of making everything feel like a perfume advert. Watching the trailer indicates that these sections were actually shot in colour but changed to black and white afterwards. There is some weird tension in this section which hints at something deeper to come, but the tone is not nailed down enough and evaporates – much like a spritz of eau de parfum.

As expected from a film which quotes The Wizard of Oz within the first five minutes, the second half, in which Elyse undergoes extensive treatment for her illness, shifts predictably into colour. The clunkiness of this is somewhat at odds with the brilliant work done on previous films by cinematographer Dante Spinotti, whose filmography is way more impressive that Elyse would suggest.

The film is directed by Stella Hopkins, and the clue is in the name. Hopkins is Sir Anthony’s wife, and he has admirably lent his accomplished acting to his wife’s venture. Sadly, Lady Hopkins does not seem to have the same talent as her husband. The direction is pedestrian and the script (which she co-wrote with Audrey Arkins) lacks originality and results in stilted dialogue which only Hopkins himself seems to be able to surmount. Lisa Pepper is at her best ironically when she has no lines to speak. The other key members of the cast – Elyse’s husband Steve (Aaron Tucker), her mother (Fran Tucker – coincidence?) and nanny’s daughter Carmen (Tara Arroyave) seem to have generally acted in films in which Hopkins also appears, and even then in very small roles; Aaron Tucker in particular appears to be well out of his depth. He and Tara Arroyave are also listed as producers, and Arroyave was Stella Hopkins’ name before she married suggesting that there are other family ties at play too. Sir Anthony even wrote the music.

Throughout the film, it’s difficult to know what are flashbacks and what are dreams, and it’s not evident that this is deliberate. It’s fine for a timeline to wander around during a film, particularly when the main character’s grip on reality is tenuous – but the strands fail to coalesce, and instead of a vaguely satisfactory ending we are left with some poor aging make-up and an incredibly cheesy finale.

And so while the subject of mental health and the impact on both the individual and their family is an important one, and also evidently a personal one to the writer/director, Elyse definitely required a less amateurish hand if it was ever going to deliver a watchable film.

Elyse will be released 31st May 2021 on all digital platforms.