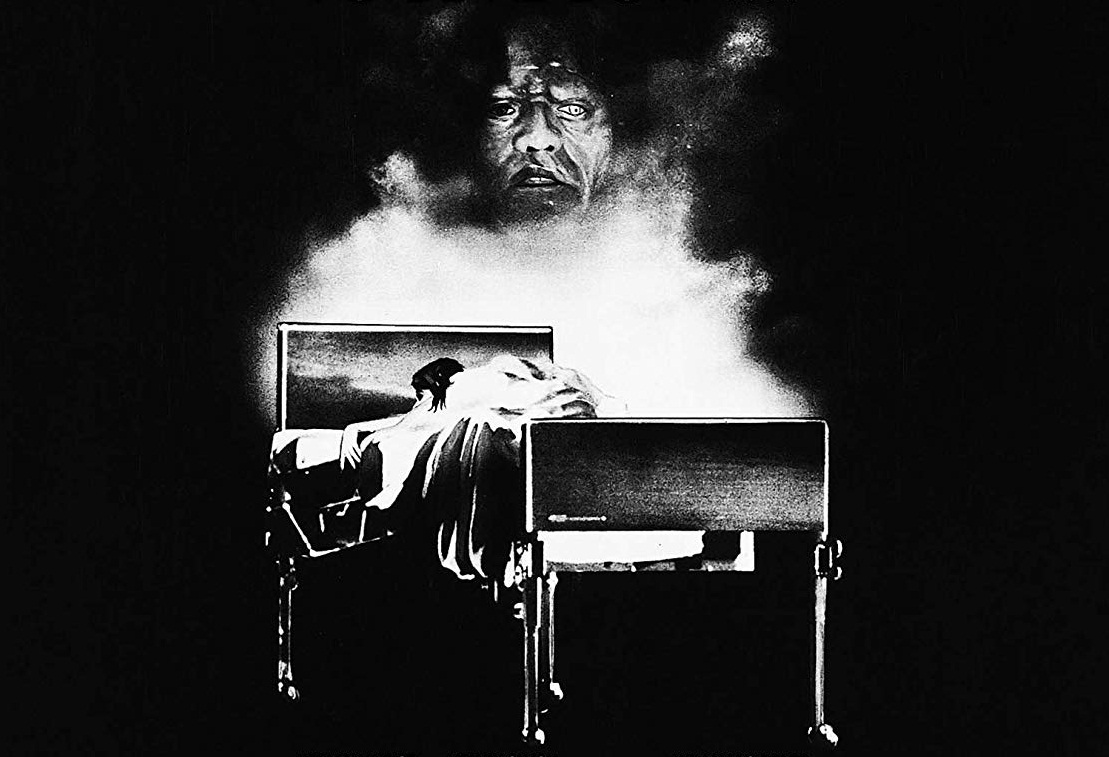 Adam love-love-LOVES the truly deranged lunacy of Tony Curtis’ mid-life crisis film The Manitou!!! The film is being released by Scream Factory with extras and a new transfer.

How does one begin a review of The Manitou? If you are one of the fortunate few to have seen this piece of deep-fried insanity you will know what I speak of. Where does one begin? With Tony Curtis in the midst of a real mid-life crisis on screen? With the racist portrayal, depiction, and treatment of Native Americans and their culture? With the nonsensical story written by a group of mental patients? Or the direction that feels like it was the most important film since The Ten Commandments? The answer is none of it and all of it.

Once one is in the rhythms of this film, one will either accept or reject its specific narrative style. Most will reject. Those that can accept this film on its terms will be treated to one of the craziest studio-released films in the last half-century. Part deranged mid-life crisis vanity project, part deranged self-important pseudo-Native American Mysticism Horror Possession film. That combination is what makes The Manitou so special. At every turn, the film attempts to put Curtis front and center as the” hero” of the piece, even at the most inopportunistic of times. This results in Curtis’s Henry in long arguments with various characters even when Henry knows he shouldn’t. The film’s explanation of Native American Mysticism is more ridiculous than insulting, written by someone, obviously white, who probably watched the Billy Jack series as his “research” rather than actual research. It’s that type of obvious and lazy approaches to story that creates a logic vacuum so great by the film’s ending set piece in outer space everything, not just the set piece defies logic.  This is of little consequence because nothing, in fact, has made any sense the entire runtime of the film.

There isn’t any easy way to summarize all that in The Manitou. It is a film that should be “experienced” rather than discussed.  Either way much of it, including the wardrobe choices for Mr. Curtis, will make no sense in the way traditional narrative films do.  For those that seep themselves into the weirder narrative films of cinema, this will be a holy relic and should be treated as such.

The new 4K Scan Of The Original Film Elements does come with a caveat.  As you begin the film Scream Factory placed this label on the film, “For this new 2019 transfer, the only surviving film element, an inter-positive, was scanned in 4K by Studio Canal.  Sadly, the negative for the film is lost.” Does this affect the presentation, Yes and No. The yes part, the quality of the film itself is effected as its not as clean of a transfer one would have hoped for. The sharpness of recent Scream Factory transfers isn’t there.  The colors appear to be more robust and there’s definite ‘bleed through’ with color saturation (Note: I attempted to adjust my TV to no avail).  The no part, this is the best this movie has ever looked.  Having the DVD edition I sampled the transfer and its a night and day difference. The DVD is substandard by anyone’s definition.  This Blu-Ray is leaps and bounds better.  The film transfer is uniquely beautiful with heavy grain and blown out lighting that appears to be apart of the intent and is gorgeously reproduced here.  For anyone that loves grain, they are not shy about letting the grain show not even attempting to do any DNR, this is a treat.  The result is an oddly unique transfer that feels like the best 30-year-old print someone just discovered and decided to run sight-unseen.

The Audio Commentary by Film Historian Troy Howarth is not only informative but pretty damn funny.  Howarth takes you through the production of the film and is able to discuss Girdler’s career, how they got so many famous actors, the productions origins and enough funny anecdotes to fill an entire book (a book I would gladly buy and read cover to cover).  If you loved the film, you’re going to want to dig into this track.

Producing William Girdler – a Conversation with Producer David Sheldon is an 11-minute interview with the producer. Sheldon discusses his origins with directing theater then moving to produce theater eventually moving to film. He worked through the ranks at AIP and eventually running it for Sam Arkoff. He talks at length about his connection with Girdler including the legendary Abby (including a bit of the Warner Brothers lawsuit) and Sheba Baby. How they separated and eventually reconnect to do Grizzly and The Manitou. Those looking for more information about The Manitou will want to look elsewhere as he only briefly discusses the film.

Interview with Graham Masterton is a 28-minute interview with the man who wrote the novel The Manitou. Masterton discusses his life and times before writing The Manitou. Which includes being a green grocery, chasing girls in high school, and eventually leading to being hired as a Junior Reporter. Moving from a Junior report to a Playboy-style Magazine to Penthouse Magazine eventually getting to novels. How Girdler picked up the novel by chance at LAX, and how the cast was cast (many of the Male Cast members had alimony payments). Other things covered are things like the 6-sequels of the original, the Adaptation of the film and so much more.

Rounding out the special features are the Theatrical Trailer, TV Spots, and an Image Gallery. The Trailer sells the biggest moments giving no context for what lunacy is in store, the 3 TV Spots don’t do any better but they all are hilarious. The final feature is an image gallery that can be either left running automatically (runtime is about 7-minutes) or individually search them which includes stills, lobby cards, theater ads, VHS cassettes, and Movie Posters. Bonus points for them including the articles from the EPK including the mentioning, hilariously, the new sound system Dolby Stereo.

For those that love Fringe Genre Cinema, The Manitou is a winner.  Those that know of the work of William Girdler will already know this is an instant purchase.  Scream Factory has made this an attractive package with some insightful extras that will make it an easy decision.  HIGHEST POSSIBLE RECOMMENDATIONS!!!

Scream Factory’s Blu-Ray Edition of The Manitou is out April 16th!