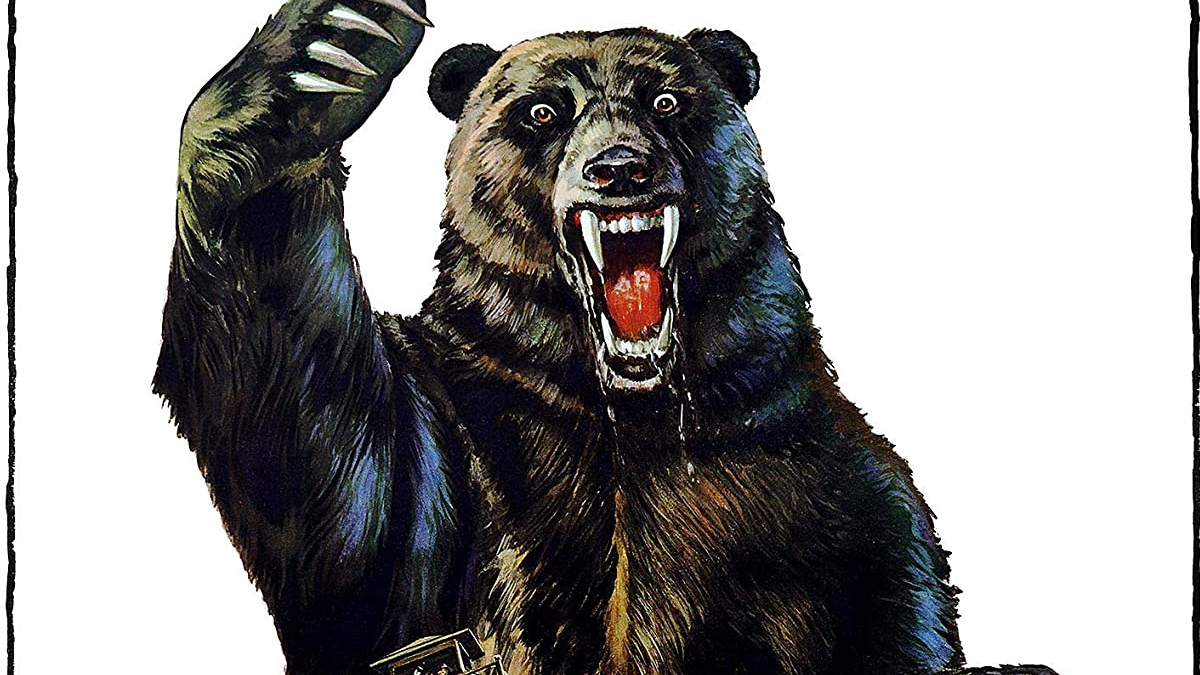 William Girdler’s Jaws with Claws exploitation classic Grizzly comes back to Blu-Ray with a new 2K Master.  Severin Films has filled this to the tippy top with extras.

William Girdler may not be a name known by the causal cinema fan but those that love cult classics know it well.  Girdler’s most financially successful entry Grizzly takes all the troupes, characters and storylines of Jaws and remixes them into a tale of a small mountain town terrorized by a land shark err Grizzly Bear.

A small vacation town in the middle of the mountains is terrorized by a man-eating, and woman-eating the bear doesn’t discriminate he’s equal opportunity, grizzly.  The town’s sheriff (Christopher George) is stopped at all avenues by the local government (e.g. mayor) and it is only have true tragedy (like four helpless people dying wasn’t tragedy enough) strikes od they hunt down this terror.  Fortunately for us this Grizzly is smarter than your average bear and manages to kill everyone except the sheriff.  Duel atop the mountain commences between Sheriff and Bear.  Shades of High Noon…

Yes, yes, yes… I know I may have been a wee bit sarcastic in the above synopsis but the way in which Grizzly adheres to the storytelling in Jaws is astounding.  So much so its shocking that Grizzly never suffered the ire of Universal the way the Castalleri’s Great White did.  I guess changing the animals and names of the characters was just enough to get away with copyright… I mean copying… I mean HOMAGE.

No matter for those that love the overheated genre of “when animals attack” or eco-horror as many love to call it, this is one of the best.  Part of the delight and fun of these films is how existential they play, especially the ones from the 1970’s, as they have no qualms with murdering everyone but the authority figure.  Girdler realizing that he was at the beginning of the trend rather than at the end takes the opportunity and runs with it. Kids, beautiful campers, modern day trappers (not the Wall Street Kind) all get their (un)just deserts at the hands of the Grizzly of Grizzly.  All shot in a sobering manner that makes the goofiest of kills highly entertaining in a crowd pleasing sort of way.

Girdler never winks or nods at the audience creating a film that’s beautifully crafted and wonderfully composed for the widescreen.  The cinematography and use of frame is some of the best of Girdler’s career.  Some of the shots would even make John Carpenter envious of the composition and camera movement.

Grizzly ends the way that you think it should and does so to the Spinal Tap “11”.  At the end of the day, that’s all you can ask for from a Killer Grizzly Bear movie.  That it does its best to hit that ridiculous overheated entertainment level one hopes that all lesser Grindhouse films would but often done.  Grizzly definitely lives up to its reputation as a good time to be had by all who see it.

Grizzly has never looked better than it does in this new 2K master.  Severin has pulled out all the stops here.  Having seen various iterations of the film from DVD, to Blu-Ray this is a definitive best.  Unless Severin decides to bring the film in UHD this is the standard.  The image is sharp and wonderfully verbose image.

The newly recorded Audio Commentary with Mondo Digital’s Nathaniel Thompson and Film Writer Troy Howarth.  The duo is upfront about their love of this “all-time great” eco-horror and imitation films.  Details include the production company Montoro’s release of Beyond the Door and the huge success of Grizzly, their pick-up of Great White (the notorious Castelleri Jaws rip-off), Girdler’s Abby (an Exorcist rip-off), the score (by Robert Ragland), and its conduction with a full orchestra, the actual budget of the film, how the film was produced in less than a month with a 2ndunit that the writers/producers helmed, the inappropriate PG rating with the gore, the production filming in Georgia, the personal history and career of director William Girdler, the sequel Grizzly 2 and why it wasn’t finished and it’s resurrection this year, the career and personal history of Christopher George, the mauling of the child in the film, Girdler’s use of the widescreen frame, the entire subgenre of animal attacks films, a comparative discussion of Girdler contemporaries Scorsese and Spielberg, and much more.  Thompson and Howarth give us an informative and entertaining track.  Howarth can be heard during his great track for The Manitou.

The archival commentary hosted by Walt Olsen with Producer Sheldon and Actor McCall is an interesting conversation.  The details include building a forest set from real trees in a high school gym, the Jaws connection, an interesting solution to paying extras without any money but with money, the research they did for the “bear” behavior, the scenes that Sheldon directed, the bear sound FX work done quite literally by Sheldon and others, Sheldon’s work on other animal attack pictures like Squirm, working with the two different bears during the production, the films deleted scenes, the filming of the bear attacking the child, George’s reputation for being a very conservative in his views, the sequel to Grizzly and a recounting of what went wrong with that infamous production, Sheldon’s approach to horror, the song that the composer wanted to use, and more.  The commentary is a nice conversation with the group with many personal and production anecdotes.

Stephen Thrower on William Girdler (45:22) – this all-new interview/visual essay from Nightmare USA Author Stephen Thrower.  Thrower gives us a detailed breakdown of Girdler’s life and career.  Details include being raised in a wealthy home, his time in the military, his first work as a director and producer, his work as a regional filmmaker, how Three on a Meat Hook that led to his work with API, unmade projects that Girdler wanted to make, his work in Blaxploitation like Abby and Sheba, Baby and including Pam Grier’s dislike for Girdler, a truly deranged action film called Project Kill featuring Leslie Neilson (which looks amazing in the Girdler way), the Abby sequel that never happened, Grizzly’s production and success which lead to a lot of lesser imitation, Grizzly’s strengths and weaknesses at a film as a whole, the wide release of Grizzly and how that was possible, Grizzly follow-up Day of the Animals, the strengths and weakness of Day of the Animals, Girdler’s personal relationships with his actors, the financial conning of Girdler by Montoro the producer, the craziness that is The Manitou, the tragic death of Girdler, and much more.  The featurette is beautifully produced with clips of Girdler’s work, behind-the-scenes photos, and best of all some great 8mm behind-the-scenes footage.  This is some of the best summation and deep dive into Girdler’s career.

Making Movies with Girdler (36:56) – the audio interview hosted by Severin’s David Gregory with business partner and friend J. Patrick Kelly is set to amazing behind-the-scenes 8mm footage.  The footage just like any 8mm of the time, the image is grainy and scratchy but amazing, to say the least.  Of course, there is no audio which is why Kelly is recorded via phone call.  Some of the great looks include full views of the mechanical bear, locations and the crew in it, Girdler directing the various actors, and more.  Kelly discusses how he became friends and eventually partners with Girdler, the work they did in commercials/ads, the transition to feature films, and much more. There is not only the 8mm footage but film footage from other films, photos, and more.  Another great featurette giving us more information about Girdler’s career.

The Towering Fury (8:56) – an all-new interview with actor Tom Arcuragi.  The actor discusses the work he did prior to being cast in Grizzly, the casting in the film, working with Girdler and his directorial style, working with the actors, working on location in Georgia just outside Atlanta, working with the actual bear (named Teddy), and more.

The Grizzly Details (18:51)– an all-new interview with Producer David Sheldon and Actress Joan McCall.  The dual interview with the husband and wife team does cover some of the same ground as the commentary but some of which does not which includes the full details of how the screenwriters came up with the idea for the film, how Girdler came onto the production, the quickness of getting finances, how Warner Brothers almost produced the film, Girdler’s directorial style, and his focus, certain scenes that were cut from the film, working with Christopher George, Andrew Prime, Richard Jaeckel, some interesting anecdotes about the bear and the mechanical bear, and much more.

Movie Making in the Wilderness (7:00) – this vintage Behind-the-Scenes Making Of is an utter delight.  There’s some great behind-the-scenes footage that appears to be transferred from a VHS dub.  There is a wealth of footage of the bear in action.  Even though it was no doubt made for TV of the era it’s deeply informative with a great deal of footage and comments by Girdler and the behind-the-scenes crew making the film.

Jaws with Claws (36:49) – is another archival Making Of Grizzly.  This featurette made during the prime DVD days is a proper making of.  Featuring interviews with producer Shelton, producer Harvey Waxman, actor Andrew Prine, and actor McCall. The documentary covers the development, production, cast and crew, Girdler’s untimely passing, how the film was essentially the first Jaws rip-off, their refuting that it was simple Jaws rip-off, the distribution, the success, the crooked accounting of Ed Montoro, the court cases that ensued, the rise of the film in its cult classic status, and more.  The featurette does have some of the great b-roll footage from the other featurettes but adding some additional context.

Radio Spots (0:55) – two radio spots that play over a poster of Grizzly.

Grizzly lives up to its cult status and Severin Films has made sure that their Blu-Ray is stacked with features.  High Recommendations!!!

Severin Films’ Blu-Ray of Grizzly is out now