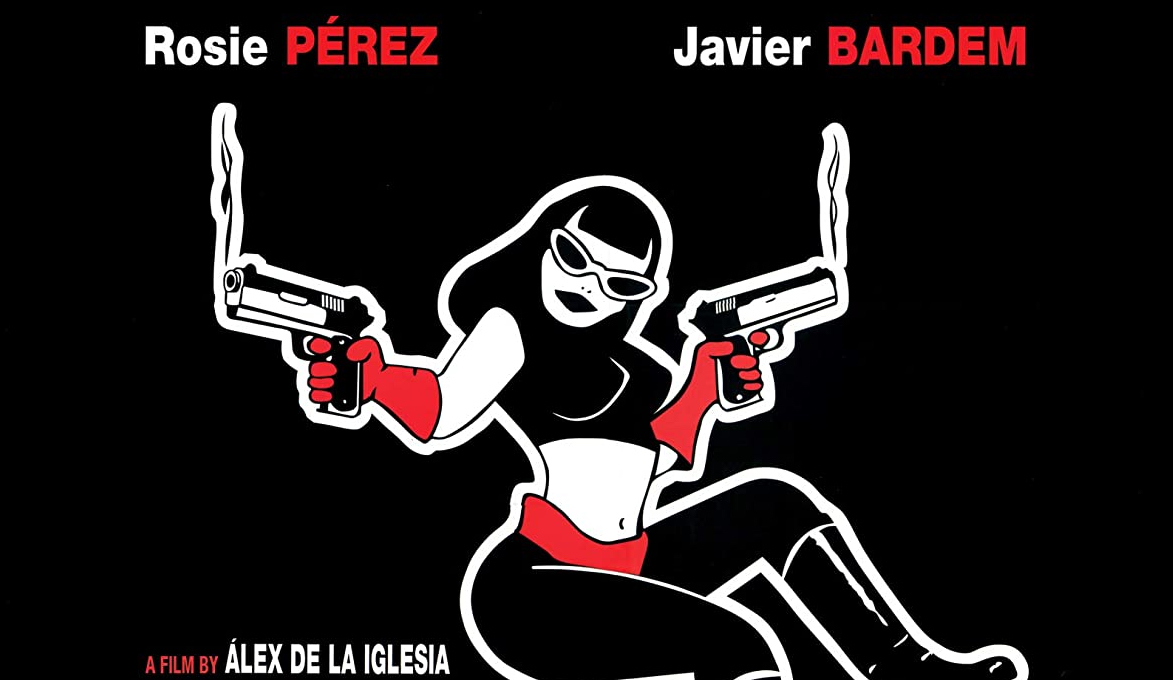 Move over Natural Born Killers… Alex de la Iglesia’s Perdita Durango is serial killers on the run with a huge dollop of Santeria and Barry Gifford.  Severin Films delivers the goods with this one.

Not every film should be made for everyone in mind.  Films should be daring.  They should be offensive to some and artful to others.  Films should provoke an extreme reaction.  Without these kinds of artistic ethos, we would live in a world without Brunel, or David Lynch, or Spike Lee, or Claire Denis.  A film world without bite and without artistic merit.  Just rollercoaster rides designed to be inoffensive to everyone.  Perdita Durango is daring, artful, designed to provoke an extreme reaction.  You may not like it, but it does not care what you think.  That is where it draws its power.

Perdita (Rosie Perez) is eking out a living as a sex worker on the Mexican/American borders.  It is not until she meets Romeo (Javier Bardem) does she find her true calling and true love.  Part-time hustler and practioner of Santeria, Romeo is exactly what Perdita is looking for.  Together they burn brighter than apart.  Convinced after seeing him perform one of his rituals they must perform one together they kidnap two teenagers.  The couple leaves a trail of felonies behind that involve baby fetuses, murder, rape, the Cartel, sex trafficking, and anything that can and will offend and assault.  On their trail is a DEA Agent (James Gandolfini) and his bumbling partner (Alex Cox).

Most will be offended by everything that transpires in this film.  Which is understandable.  The film is ultra-violent, perverse, and twinged with the darkest of gallows’ humor.  Co-Writer/Director Alex de la Iglesia creates a film that is as much a mythic western as it a psychotic love story between two of the unredeemable souls on earth.  The one thing that separates Perdita Durango from its contemporaries is its lack of a moral compass.

Part of the fascinating magnetic draw to the film is its freedom from judgment of all characters in the piece.  In an era where if anything is shown in a film, it becomes an issue of condoning the act, Perdita Durango will play to many as wildly inappropriate and tone-deaf.  There is so much in this film that will offend beyond the sex and abuse on display.

De la Iglesia and co-writer/novelist Barry Gifford create a harsh dark world that violence and abuse are what is traded in.  The power comes from the lack of judgment and the sobering view and the wild shifts in tone.  Rather than be distanced, de la Iglesia chooses to be subjective and pushes everything into your face to see.  Nothing is left to hide.  Though nothing is judged.  We are left to make our own judgment.

Perdita Durango is a relic of a bygone era.  One that could never be made today.  Or one that if made would be burned to the ground because of what is perceived as offensive and condoning.  Though nothing in this wild ride of a film feels like it is condoning the acts of violence it’s portraying, in fact, quite the opposite.  Like any piece of daring art, it is meant to poke and prod you into those dark uncomfortable places.  Perdita Durango is just that… a daring piece of punk rock art.

Severin has done it again.  A wildly beautiful stunning restoration.  Like with their transfer for de la Iglesia’s The Day of the Beast, this 4K restoration is nothing short of amazing.  The high-contrast image is beautifully rendered here in UHD.  Like a new coat of paint, the UHD disc accentuates the high-contrast image giving us deeper true blacks and beautiful grain structure with retaining the 35mm image’s sharpness.  Again, it cannot be understated that the job that Severin has done with this restoration is nothing short of a miracle.

On The Border (28:10) – an all-new interview with Director Alex De La Iglesia discussing the making of Perdita Durango. De la Iglesia begins with discussing how he got attached to the project starting with the trouble that the producers had with original director Bigas Luna’s vision of the film.  Details include the script development done after he joined the project, the approach to the characters and some of the questionable material that was brought to the screen, bringing on Javier Bardem and their collaboration and friendship, the casting and work done by Rosie Perez, casting James Gandolfini, the casting of Screaming Jay Hawkins, going to the actual Santeria Markets in Mexico to get the dressing for the sets for realism, some of the crew worked on Bring me the Head of Alfredo Garcia, the spirit of Peckinpah in the film, casting of director Alex Cox and how Universal fired Cox, he relates it to a project he worked on and was similar, how they approached the sex scenes, how they accomplished the ending they did, the filming locations around the Southwest of America and Mexico border, the specific look they were going for, his friendship and love of the films of Gaspar Noe and a great story about them together, the films initial release, and much more.  The interview includes a lot of great b-roll footage from the production.  Spanish with English Subtitles.

Writing Perdita Durango (16:43) – is an all-new interview with Writer Barry Gifford discussing the writing of the novel (which is the sequel to Wild At Heart, Isabelle Rossellini played the character in that film which the novel is based on) and eventually writing the script.  Gifford discusses the producers that purchased the rights which at first he did not him to adapt, working with the fired director Bigas Luna, how Pedro Almodóvar wanted to make the film, eventually how de la Iglesia was hired, how he felt about his adaptation that de la Iglesia, working with David Lynch to create scripts, a song that he created but didn’t get used, the character of Perdita Durango as he developed, moving away from drugs to something equally sinister, his thoughts on the cast in the film, a crazy story about stunts and Gandolfini, the violence portrayed on screen, and much more.  English without Subtitles.

Dancing With The Devil (12:57) – An all-new Appraisal By Film Scholar Dr. Rebekah McKendry.  The Film Scholar, Filmmaker, Doctor, and Podcaster extraordinaire discusses de la Iglesia’s career leading up to Perdita Durango(including The Day of the Beast), the lack of distribution because of its content and the fact that it’s a comedy (albeit a very dark one), the context of where Barry Gifford took the character in novel form, the real life woman that Perdita Durango is based on, the real life men (plural) that Romeo, the possible casting at the time, how de la Iglesia approached the Santeria, Bardem in the role, how the film would not be made because of the controversial content, and much more.  The interview is a really great discussion of this film and exactly what makes it great.  English without Subtitles.

Narcosatanicos: Perdita Durango and the Matamoros Cult (18:14) – an all-new interview with Abraham Castillo Flores and ‘Cauldron of Blood’ Author Jim Schutze.  The duo discusses the real-life events that much of Perdita Durango is based off of, a breakdown of what the various religious beliefs that were a part of the real-life incidents, the players in the actual events, how the movie The Believers played a part in the cult’s initiation, and how it all transpired.  The featurette is beautifully edited together with powerful footage and stills from the real-life incidents.  NOTE: There are some real-life graphic images in this featurette. English without Subtitles.

Canciones de Amor Maldito: The Music of Perdita Durango (21:13) – an all-new interview with Composer Simon Boswell.  Boswell discusses how de la Iglesia loved the composer’s work in Italian Genre in the 80s, how he went to Spain to work with the director, how difficult the composing was for Italian films as opposed to Spanish films, the solution he came up with on how he had to build the score because of the lurid and controversial content, what he feels is his best scores, his theories on composition and how it works in all of the films he’s composed, working with Alejandro Jodorowsky, Dario Argento, de la Iglesia, scoring the Santeria Ritual, and much more.  English without Subtitles.

Shooting Perdita Durango (4:54) – an all-new interview with Director of Photography Flavio Labiano.  Labiano discusses how he came onto the project, the bigger budget and shooting schedule, working with Bardem, Gandolfini, Cox, the visual look and bringing out the heat visually and how it was accomplished (note three years before Trafficwould do something similar), and much more.  English without Subtitles.

Trailers – included on both UHD and Blu-Ray are two trailers.  The Spanish Trailer (1:37) and the US Trailer (1:50).  If one wants proof of the amazing work that Severin has done with the film look at both these trailers.

Perdita Durango isn’t for everyone.  For those that it works for it’s a wild ride of a film akin to Wild at Heart, True Romance, and A Clockwork Orange.  Highest possible recommendations!!!

Severin Films’ UHD of Perdita Durango is out now