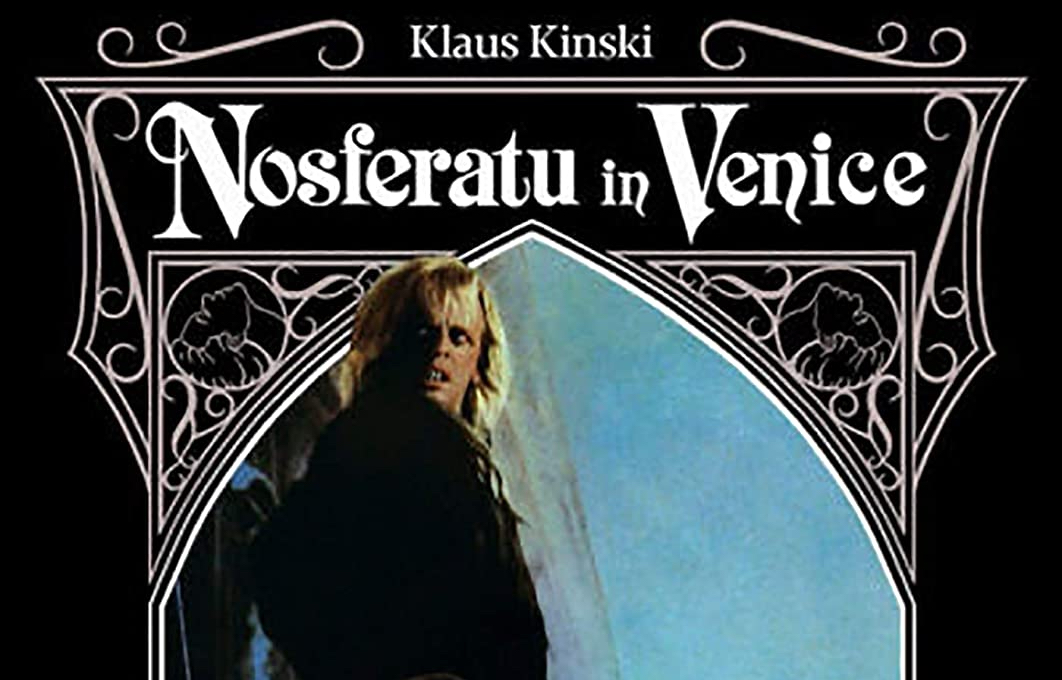 Nosferatu in Venice is a sequel no one needed but every Cult Fan should watch.  Severin Films’ Blu-Ray is loaded with special features and a beautiful transfer.

If you’re of a certain disposition as a cult film fan you know that Italy is where some of the strangest, brilliant, shocking, wild, and outright legendary genre films were created.  Loose copyright laws bought filmmakers like Enzo G. Castellari the latitude to remake or sequelize films like Jaws, Escape from New York, The Warriors… It would be the only place in the mid-1980s that they would even think of making a sequel to Werner Herzog’s Nosferatu starring the disturbed Klaus Kinski.  Though taking Herzog out of the picture, keeping Kinski, who refused to wear the iconic Count Orlock makeup, and adding in Donald Pleasance and Christopher Plummer to the mix.  What you get is Nosferatu in Venice.

To even try to attempt to regurgitate the plot would be an exercise in futility.  That isn’t to say there isn’t one but the one that has been created is so baffling that the usual “dream logic” excuse will not do.  It has something to do with a family’s ties to Nosferatu (Kinski), and he wanting to drink the blood of a certain virgin so he may die.  Cut to a lot of introspective walking by Professor Paris Catalano (Plummer), a lot of eating by Don Alvise (Donald Pleasance), and a lot of sexual predator scenes of Nosferatu.

The film is as beautifully shot as its plot is nonsensical lunacy that seems to be pulled from the psycho-sexual mind of Kinski himself.  The Nosferatu in this “sequel” is an old man tired of everything but the sexual and blood encounters he occasionally has (in a 90-minute film he has five of them, yes, we counted).  Plummer tries to do the best he can but honestly… he spends most of his time walking around beautiful rooms looking baffled or lost in thought.  Pleasance is hilarious as a Priest who literally spends every scene eating and dispatching plot.

Nosferatu in Venice at its end is a confounding piece of genre cinema though one that will entertain those willing to venture into this kind of Italian filmmaking.

There should be no reason that Nosferatu in Venice looks as amazing as it does.  Then you realize it’s a Severin Films release.  The transfer is damn near perfect.  The film looks absolutely gorgeous in High Definition.  The image is razor-sharp without any sort of defects, scratches, or blemishes.  There are two shots that look out of place, but these appear to be FX shots mid-way through the film that look to either be pulled from a different source or the FX was poorly produced.  That only exception, this transfer looks better than a lot of films being produced today.

Is an all-new feature-length documentary on Klaus Kinski’s final years.  Divided into Seven Chapters, this beautifully produced documentary directed by Josh Johnson uses rare b-roll production footage, archival interviews with Kinski, modern-day interviews with those who worked with him on Nosferatu in Venice and other final projects, and footage from the movies.  The documentary covers 1985 – 1991 and the films; Nosferatu in Venice, Creature, Crawl Space, Paganini, Commando Leopard, Time Stalkers, Cobra Verde, Revenge of the Stolen Stars.  The documentary covers everything one could ask about those final years.  There is an entire section devoted to the sexual abuses during this period which goes from the terrifying to the absolute crazy but all that would get him in prison now.

Building stories and anecdotes from the various projects during the mid-80s.  Some wild solutions for the erratic and sometimes violent and abusive outbursts.  There is an entire section devoted to the sexual abuses during this period which goes from the terrifying to the absolute crazy but all that would get him in prison now.  All of this is a prelude to some of the truly strange and oftentimes hilarious events that transpired during the shoot of Nosferatu in Venice and how much of the strangeness in the film is in direct response to the filmmakers trying to deal with Kinski’s psychological outbursts and breaks, one of the most notorious ones being his outright rejection of having to use the makeup.  The film eventually leads to his final years and the relationships he built in Northern California.

Director Johnson has crafted a beautiful and oftentimes disturbing and ultimately sad portrait of a man whose inner demons were constantly brimming to the surface.  One that was allowed to go unchecked in the name of artistry.  This documentary is the reason to buy this Blu-Ray.  Yes, the film is entertaining, but this documentary is a great piece of informative cinema that anyone that is a fan of or curious about Klaus Kinski.

Creation is Violent Outtake – Nothing Bad Can Happen (8:12) – additional information about the making of Nosferatu in Venice that didn’t make the cut in the documentary. Some of the great details include the producers giving him his own small second unit to shoot footage and Kinski working all night on these, the footage being close to 6 hours, a great anecdote about Kinski speaking Italian, and more.  Included is a wealth of this footage.  Italian with English Subtitles.

Creation is Violent Outtake – Gypsies Should be Played by Real Gypsies! (2:28) – this outtake Luigi Cozzi recount an anecdote about Kinski’s near obsession with finding real nomadic travels to play the roles in what would have been actors.  Italian with English Subtitles.

Trailer (2:22) – an overwrought German Trailer for the film.  If you wanted to hear Christopher Plummer in German here is your chance.   German with English Subtitles.

Nosferatu in Venice is good but buy this one for the amazing feature-length doc they’ve included Creation is Violent.  Highest Possible Recommendations!!!

Severin Films’ Blu-Ray for Nosferatu in Venice is out now