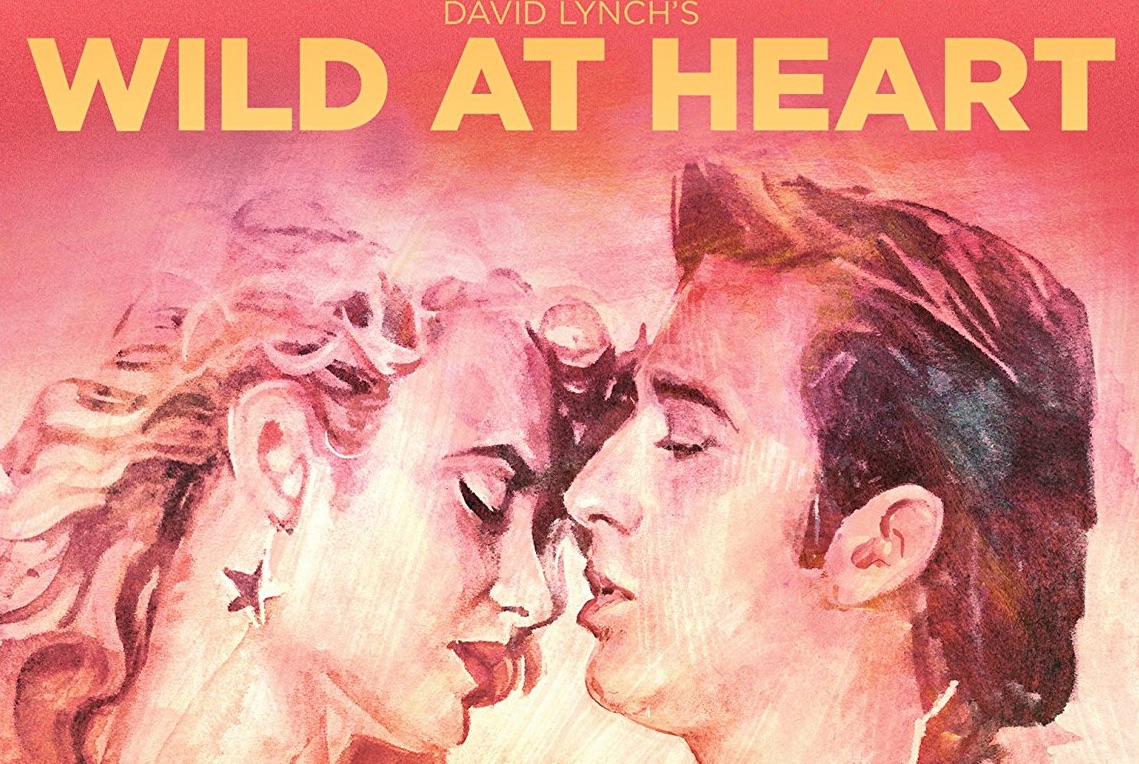 Adam gets very personal with one of his favorite David Lynch films, Wild at Heart.  The film starring Nic Cage, Laura Dern, and a host of others is being released on Blu-Ray from Shout Factory’s label Shout Select.

Let us journey back to a simpler time.  1990 to be exact.  Twenty-eight years ago.  A time that I was told I could not see Lynch’s Wild at Heart.  For a 12-year-old who had recently discovered the work of David Lynch, thanks in large part to Twin Peaks, this was a cinematic death blow.  Dune had melted my brain (in the best way).  The Elephant Man broke my heart and soul.  Eraserhead gave me nightmares for months.  Blue Velvet had made me uncomfortable for reasons I could not articulate.  Imagine this fiend for Lynch’s work being told he could not see Wild at Heart, his newest film.  Of course, this made no matter to 12-year-old me.  After telling my mother I was going to see My Blue Heaven, I snuck myself into Wild at Heart.  Now, 28 years later I understand why she had banned this jolt of excess from me.

Everything in Wild at Heart is in some form of extreme excess.  The bold arched violence.  The sex displayed with graphic verisimilitude.  The aggressive imagery, sound design, and histrionic stylized acting. Lynch is working in a heightened level that’s akin to a fairy tale, complete with wicked witches, deus ex machinas, and a musical style ending.

Many find umbrage with the specific style Lynch uses in most of his films, especially Wild at Heart.  It does require a viewer to have more esoteric tastes than the normal moviegoer to truly enjoy and revel in what the director is doing.  Though if one can accept the style and purpose Lynch creates in his films, what is unlocked is similar to understanding the degree of difficulty that comes with a virtuoso playing a difficult piano concerto.  Though Wild at Heart is a concerto of the strange and malformed dark American dream turned nightmare of youth culture.

The film finds star-crossed lovers Sailor (Nicolas Cage) and Lula (Laura Dern) driving, dancing and fucking their way from the deep recesses of South Carolina to the dreamy sunshine of California.  Lula’s mother Marietta (Diane Ladd, Dern’s real-life mother), and the strange cast of characters of the Lynchian underworld conspire to thwart Sailor and Lula’s happily ever after.  The Lovers odyssey takes from the sweaty bars of South Carolina to the Heavy Metal bars of New Orleans to the Porn Motels and dusty Banks of New Mexico. Can Sailor and Lula survive fate, Marcello Santos (J.E. Freeman), the Durango sisters (Isabella Rossellini, and Grace Zabriskie), Bobby Peru (Willem Dafoe), and the Wicked Witch of the East to show their love is true?

The film’s style and premise as influential in the 1990’s and 2000’s as Bonnie & Clyde or Badlands were in their respective eras. Lynch’s love on the run magnum opus influenced the likes of Tony Scott, Greg Araki, Oliver Stone, and Quentin Tarantino to name a few.  They each put their spin on this particular story troupe (which is actually based on the first in a series of novels by Barry Gifford) but never to the heightened genius that Lynch brought to Wild at Heart.

Part of what the many imitators got wrong was the chemistry and love between the two leads.  Sailor and Lula though pictured having graphic sex, their love is pure to the point of almost being a southern fried parody of a Disney-styled romance. It is that pure almost blinding love that allows Lynch to go as dark as he does with his film.  It is the counterbalance between light and dark that makes the film such a potent and original love story.

Many a joke is made at Nicolas Cage’s expense nowadays but Wild at Heart finds him at his manic, brilliant controlled best.  As Sailor, Cage is Elvis with a violent streak, a man so in love with his woman he would do anything for her.  Like Kyle MacLaughlin before him, Cage is Lynch’s cipher for the story.  But rather than being Lynch (which is always the case with MacLaughlin), Cage’s Sailor is the dream personification for Lynch. Sailor is the cinematic hero Lynch wants to be; part rockabilly, part punk, all hell raiser, and ass kicker.

If Sailor is Lynch’s alter ego, Lula is his dream girl. As played by Laura Dern, Lula is part Sandra Dee, part Peggy Cummings from Gun Crazy.  Dern’s Lula is both the physical and emotional guiding light for Sailor.  The actress creates an unapologetic hyper-sexualized young woman who is both lost and found with Sailor.  Dern takes anachronistic dialog and makes it sing in a way few if any other actress could have.  There is a scene between Lula and Bobby Peru (Dafoe) that if played by anyone else would have been about victimization.  In Dern’s hands (with an assist by Dafoe) it becomes something more complex, trickier, less binary.  Lula on the page is a series of tropes and clichés but Dern shapes a character less of a stereotype or cliché.  Lula, as inhabited by Dern, is the mythological archetype. The troubled youth that was exploited in so many of the Drive-In youth films of the 1950’s.

The film in many ways is the spiritual cousin to Blue Velvet.  Blue Velvet took the perfection of middle America and showed its rotten perverse core.  Wild at Heart takes the vilified trashy youth culture and shows it purity, heart, and soul. The film isn’t just art, its cinema at its loudest, arched, deliriously best.  Even among Lynch’s filmography Wild at Heart is something truly special.

The transfer appears to be the same one used by Twilight Time for their limited release a few years back.  That’s good news all around as the transfer was beautiful.  The film has a beautiful sheen of grain that gives it that film look.  Comparing it to the Twilight Time disc and the UK version, Shout seems to have bumped up the bit-rate giving it a cleaner look and less compression.  Those that waited for this edition and hadn’t paid for either of the previous editions will be very happy.

Shout Select has thankfully gathered all the previously existing extras from the MGM DVD special edition release from the early 2000’s.  They also included a new feature.

Interview with Novelist Barry Gifford is a 30-minute discussion with the acclaimed novelist about the making of the film, and his body of work concerning Lula and Sailor (he’s written approximately 8 additional novels about the couple and their son).

The Extended And Deleted Scenes amount to almost an entire film (at 76 minutes) and is oftentimes as brilliant as the film itself.  These were previously released on the DVD and do note that the quality is the same as most of these scenes were pulled from less than pristine elements.  They are a fascinating glimpse into how David Lynch edits his films.

Uncensored Bobby Peru Scene is literally the unrated version of the infamous Bobby Peru scene and a discussion of how Lynch obtained an R-Rating.

Love, Death, Elvis And Oz: The Making Of Wild At Heart is a 30-minute making-of documentary, again ported over from the DVD.  This is a case of “if it ain’t broke don’t fix it” as the documentary goes into detail on everything one would want to know about the development, production, and release of the Wild at Heart.  Everyone from Cage, Dern, Lynch and the rest of the cast and crew show up to discuss a film they are obviously proud of.

Dell’s Lunch Counter: Extended Interviews is a 20-minute collection of additional snippets of interviews from the making of that were not included in that feature.

Specific Spontaneity: Focus On David Lynch is a 7-minute feature with crew members like Randy Thom and Fredrick Elmes discussing what it is like to work with Lynch.

Lynch On The DVD Process is a 3-minute piece where Lynch describes the sometimes frustrating process to bring the movie from film to DVD.  Note, obviously this is one of the DVD features brought over.

Original 1990 Making Of EPK is a 6-minute piece of nostalgia making-of that anyone that grew up in the 90’s will appreciate.  This reviewer appreciates the extra effort Shout brings to these small touches of including these types of older, outdated featurettes.  Even if they are outdating they are a fascinating glimpse into how films were sold and discussed in specific eras.

Rounding out the extras are the Theatrical Trailer, TV Spots and an Image Gallery.

Shout Factory’s Shout Select line continues the amazing run of great underseen and undervalued films.  Wild at Heart is a welcome addition to the label; a great film given thoughtful extras, and a beautiful transfer.  This is an end of the year list great.  Highest possible recommendations on this one!!!!

Shout Select’s Blu-Ray of Wild at Heart will be released on May 22nd.