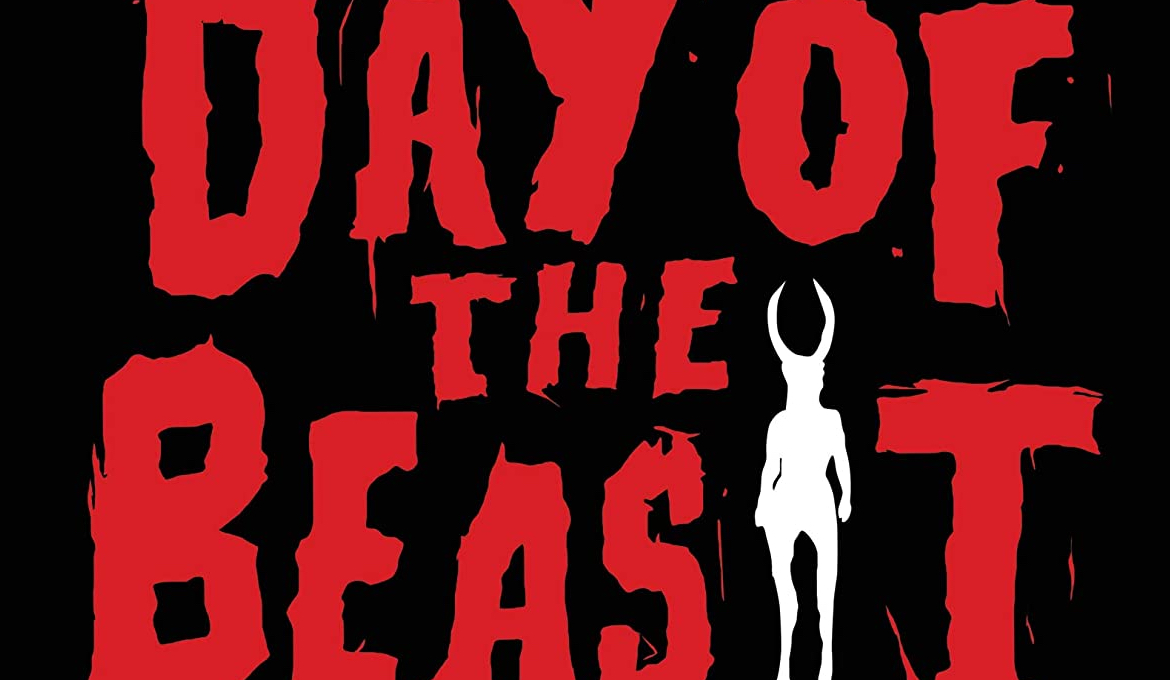 Adam has fallen in love with Alex de la Iglesia’s The Day of the Beast Christmas Time End of Days Buddy Horror Comedy. Released by Severin Films in a gorgeous UHD disc.

The film begins as some sort of joke as a Priest (Álex Angulo), a Metal Head (Santiago Segura), and a TV Paranormal Investigator (Armando De Razza) attempt to stop the birth of the Anti-Christ.  How one would ask?  By invoking Satan pledging allegiance to him only to trick the Devil and vanquishing him thus stopping the Anti-Christ from being born.  All during Christmas Time.  Specifically, Christmas Eve.  These three bumble and generally foul-up at every turn facing a much greater evil than even the Priest thought.

The Day of the Beast is a shotgun blast of a film.  It dives deep into religion, demonology, friendship, conservatism, fascism, and so much more.  The film is overflowing with ideas that sometimes fly right past you.  It is as though De La Iglesia thought that The Day of the Beast would be his only film and needed to say everything he had to say. That is not to say that the film is some sort of self-serious film about Spain.

De La Iglesia’s film is a contradiction and beautifully so.  The Day of the Beast feels like a heady mixture of Raimi, Romero, Schrader, Pasolini, Cervantes.  Though this isn’t a mix tape of styles and conventions.  At every turn the film, right or wrong, makes decision that only someone in complete control of their craft would do.  Set pieces always play out in the most unexpected of ways.

Out of the gate The Day of the Beast shows De La Iglesia as verbose filmmaker working at the time as any.  Even though the film is a mixture of tones it always feels like a whole cohesive piece.  There are moments of humor to be sure.  No film with an older man walking around stark naked without much of a comment doesn’t know it’s funny.  De La Iglesia balances that humor with the sort of scares and sacrilegious visual that one comes to expect from movies in a post-Exorcist world but we rarely get.

The Day of the Beast is best left with a warning to an unsuspecting audience.  Highly entertaining with a dash of shock and awe.  Not for the faint of heart or religious-close-minded.  Those willing to take the leap could find themselves with a new favorite film.

Severin has pulled out all the stops for The Day of the Beast.  The UHD disc is nothing short of astounding.  All one needs to do is look at the trailers or look online for the reference of the older incarnations of the film.  This disc could possibly look better than when the film was released in theaters back in 1995.  Like a new coat of paint, the UHD disc accentuates the contrasts giving us deeper true blacks and beautiful grain structure.  Some may voice opinions about the grain-heavy image but the grain gives The Day of the Beast an added layer of grime adding to the whole proceedings. Again, it cannot be understated that the job that Severin has done with this restoration is nothing short of beautiful.

I do not normally make it a point to review the audio but it should be noted that Severin has provided the original stereo 2.0 mix and a newer 5.1 mix both DTS encoded. I would strongly suggest listening to the 5.1 mix as it has one of the most aggressive low-end (or .1) tracks I’ve listened to in a very long time. You will not be disappointed.

Heirs Of The Beast (1:20:53) – is a Feature-Length Documentary by Diego López and David Pizarro on the Making and Cultural Impact of The Day of the Beast.  Details include setting the stage for the making of the film with the Spanish film industry at the time, how political maneuvering at the time informed a group of young filmmakers to make genre short films, how those short films eventually transitioned to feature-length films by a group of very talented directors like De La Iglesia, how Pedro Almodóvar helped make Acción Mutante which went from TV show to Feature and eventually led to The Day of the Beast, the development of the script, trying to find the funds to make the film proved very difficult because of the subject matter, the casting of all the roles, the very hard and difficult production, pulling together the soundtrack, being accepted and the reception at film festivals, the strategic release of the film in Spain, it’s gathering importance around the world and with younger filmmakers and so much more.  The documentary is beautifully made by López and Pizarro.  It does a great job in being more than just a making of the film but showing us context and the eventual boom to the industry that this group of very talented filmmakers brought it.  This definitely harkens back to the early Making-of Documentaries from the DVD and Laserdisc days that were more than just a few production anecdotes and flashy editing.  People who love this movie will be delighted at just how much information is here, and how entertaining this documentary is. Spanish and Italian, with English Subtitles.

Antichrist Superstar (28:11) – is an all-new interview with Director Alex De La Iglesia.  De La Iglesia discusses the origins of the film in a horror role-playing game from the 80s by Sandy Peterson, how that informed on creating a lead character that was much older to lead an action-horror films, the casting of both Álex Angulo and Santigo Segura, how he almost cast Javier Bardem in Segura’s role, the varied style of music of the film, his personal religious beliefs and how they informed on the film, how casting Armando De Razza came about, just how difficult it was to make the film, the danger of the various stunts and set pieces like the fire gags and the hanging from the building, the shocking lack of studio work, the crafty way he was able to negotiate more extras for a vital scene, the brilliant work of cinematographer Flavio Martínez Labiano, the work of Maria Grazia Cucinotta, the trouble with having the real goat on set, where some of the other subplots that play throughout the film came from, the reasons why he loves horror but doesn’t make them often, and much more. Spanish with English Subtitles.

The Man Who Saved the World (19:58) – an all-new interview with Actor Armando De Razza.  The actor who played Cavan discusses how he came onto the project, how he approached the role, how a sex worker became a sort of den mother when they filmed in the red light district, the bronze statue he is tied to, and how it was made of paper mâché, how the Make-up FX supervisor got his start as an AD with Leone on The Good The Bad And The Ugly, the problems with the goat, the humor and good spirit that both Segura and De La Iglesia, working with the late Angulo, the work of Maria Grazia Cucinotta in her debut, the challenging stunt work, hurting his eye on set, and much more.  Italian with English Subtitles.

Beauty and the Beast (17:09)– an all-new interview with Actress Maria Grazia Cucinotta.  Cucinotta discusses how during the unexpected mammoth success of Il Posto (The Postman) she found herself taking an offer to go to Spain for this small role, she compares De La Iglesia very favorably to Visconti in spirit, how she moving to Los Angeles she found about the film had become a cult classic, the stunt work she did, the help she received from everyone to help with her Spanish, and much more.  Italian with English Subtitles.

Shooting The Beast (2:36) – an all-new interview with Director Of Photography Flavio Martínez Labiano.  Labiano discusses his collaboration with De La Iglesia, how the director is a great artist, working with Segura, the challenges with the CGI at the time, and more.  English, no subtitles.

Mirindas Asesinas (12:28) –  a 1990 Short Film by Alex De La Iglesia.  Starring Angulo the film set up is literally “a man walks into the car”.  That man asks for a Mirinda (Spanish Orange drink) and all hell breaks loose from there.  Interestingly, they have some source music from The Terminator.  This one is better left to be discovered.  Spanish with English Subtitles.

Trailers (4:23) – three trailers that include the US Trailer, and the much longer Spanish trailer. Spanish trailer is subtitled.  English is not but does not have any dialog, as is the case with many Non-English Language features released at the time.

The Day of the Beast is a brilliant shotgun blast of a movie.  Severin Films has given us both barrels with a beautiful UHD Disc and a Blu-Ray stacked with special features.  Yes, its early in the year but this is Top Ten Material.  Highest Possible Recommendations!!!!