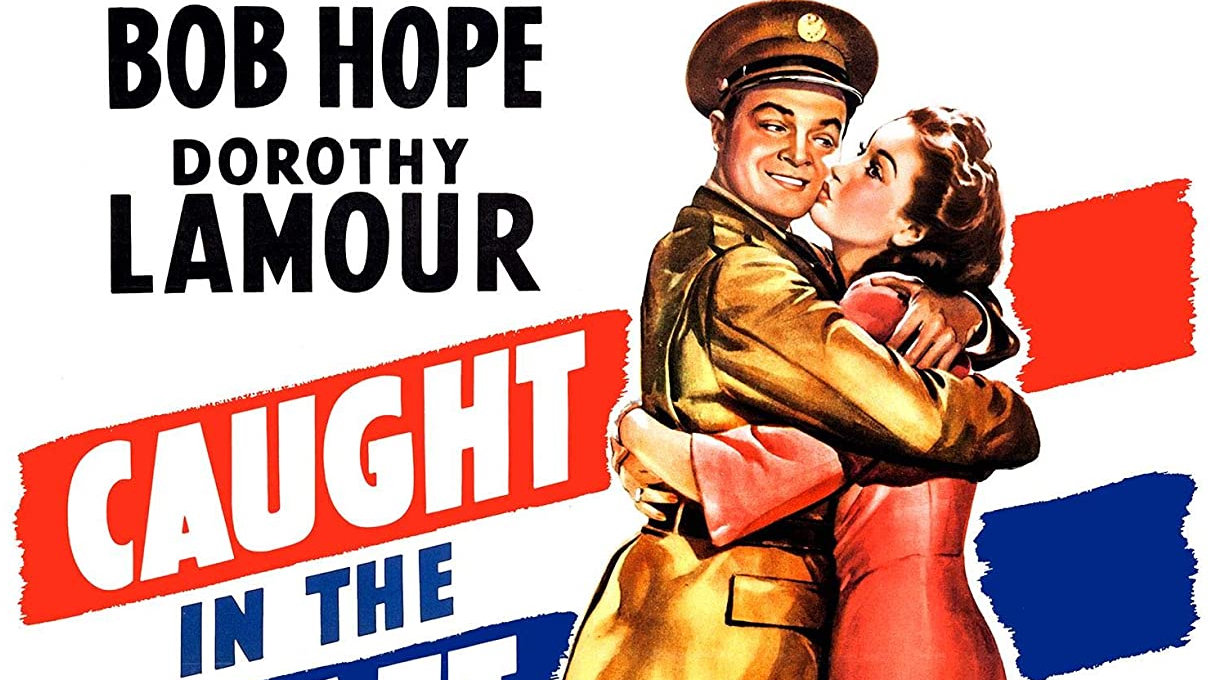 Bob Hope plays a superstar that gets conscripted into the Army.  Hijinks ensue.  Caught in the Draft makes its Blu-Ray Debut thanks to the fine folks at Kino Lorber.

Caught in the Draft seems like the boilerplate for everything from Stripes to In the Army Now (yes, a Paulie Shore movie has finally been referenced here).  The result is a comedy that’s delightful with a few questionable moments.

Superstar Don Bolton (Hope) is in the midst of making a Hollywood War Epic. The problem?  Loud noises of any kind basically put him into hysterics.  Enter Colonel Fairbanks and his beautiful daughter Tony Fairbanks (Dorothy Lamour).  After a truly terrible first meeting Bolton comes up with an elaborate plan to show Tony, he’s got the good (e.g. bravery).  This ends with Bolton and his buddies (Steve Riggs and Eddie Bracken) conscripted into the Army.  Wacky incident after wacky incident only prove Tony and the Colonel right.  Slowly though, Bolton begins to turn around and may end up being a worthy soldier.

This is a case of your classic Star vehicle.  Bob Hope is front and center in what’s essentially a propaganda film.  The arc of the character from Hollywood dilettante to a semi-functional soldier is something seen in previous films.  The difference is Hope is charming, affable, and funny.  Hope along with Riggs and Bracken are such a great team together one forgets this is propaganda.  Whether it’s peeling potatoes or running around a hospital half-naked the trio ensures maximum comedic effect.

The set pieces here are directed with comedy, rather than style, in mind by David Butler (a year later he would direct Hope with Crosby in Road to Morocco).  Though one watches these for films for Hope and the comedy and not stylish direction.  Which is the best thing about Caught in the Draft, Bob Hope front and center.

Note: there is one joke that will fall flat.  It’s an Al Jolson joke that … well just be warned.

The Brand New 4K Master is gorgeous from start to finish.  The image is always crisp in the way that black and white photography of the era, restored, can look like.  The contrast levels, grain and image sharpness are all handsomely rendered to give the image a look of a beautifully struck 35mm print.  Bravo to Kino for this beautiful work.

The newly recorded audio commentary by Historian Michael Schlesinger and Archivist Stan Taffel is an informative track.  Beginning with discussing what the 24 stars on the Paramount logo is meant to represent this track deep dives into various bits of history and production of not just this movie but Bob Hope’s filmography.  Details include the “topical” nature (a nice way of saying Dated) of Hope’s comedy in this and many of his films, just how big a comedic star Bob Hope, his TV Specials, the work of cinematographer Karl Struss, the Al Jolson joke, the career and life of Eddie Bracken, the career and life of Dorothy Lamour (and the 12 films she did with Hope) and her fashion iconography, the differences between Hope’s starring pictures and his Road movies with Crosby, the restoration done by Kino and Universal, the war comedies that were released at the time, the work of Wilkie Mahoney punching up dialog and gags, shooting locations (including the famous Paramount ranch), the work of writer Harry Tugend, the success of the film and how it launched Hope to superstardom, some production anecdotes and running behind schedule, the work that Bracken and Overman did and how it forced Hope to bring his A Game, how Paramount sold their entire Film Library to MCA/Universal in early 1960s, a Double Indemnity remake with Madonna, the comedic finale, and much more.  Schlesinger and Taffel are a great duo giving an entertaining commentary filled with informative anecdotes and historical context.

Entertaining the Troops (6:20) – Bob Hope biographer Richard Grudens takes through how Bob Hope became a part of the USO and entertaining troops from its inception in 1943. The featurette gives some context of how Hope went to the front lines and was in a bit of danger during WW2, Korean, and Vietnam.  There’s some great archival footage and photos of Hope entertaining troops.  Additional comments by comedian and fellow USO Entertainer Phyllis Diller.

Command Performance 1944 (6:47) – A filmed Newsreel showing the Command Performance radio segment created for Miltiary Forces featuring Bob Hope.  Like Schlesinger and Taffel have said that a lot of Hope’s comedy is topical but still entertaining.  There are small appearances by Lana Turner and Judy Garland.

Hollywood Victory Caravan (19:43) – A Propaganda Film produced by the Government and Paramount Pictures.  In this tale of why War Bonds are a good thing a Young Woman is trying can get passage to see her brother in the hospital in DC.  Said Young Woman sneaks onto the Paramount Lot.  Dance numbers, comedic bits, aplenty in this film all in the name of War Bonds-War Bonds-War Bonds!!!  Though it does feature a hilarious moment between Hope and Crosby in bed together.  Starring Hope along with Barbara Stanwyck, Alan Ladd, Bing Crosby, and Humphery Bogart among others.

KLSC Bob Hope Promo (4:18) –  A series of clips from various different Hope that KL Studio Classics is or has released; My Favorite Burnette, Road to Rio, Lemon Drop Kid, Road to Bali, Son of Paleface. Note that each appears to have been wonderfully restored giving us a taste of what’s in store for you if one decides to jump into the Hope Filmography.

If you’re a Classic Film Fan then you’re in for a treat with Caught in the Draft.  Kino Lorber has filled this with tons of extras. HIGHEST RECOMMENDATIONS!