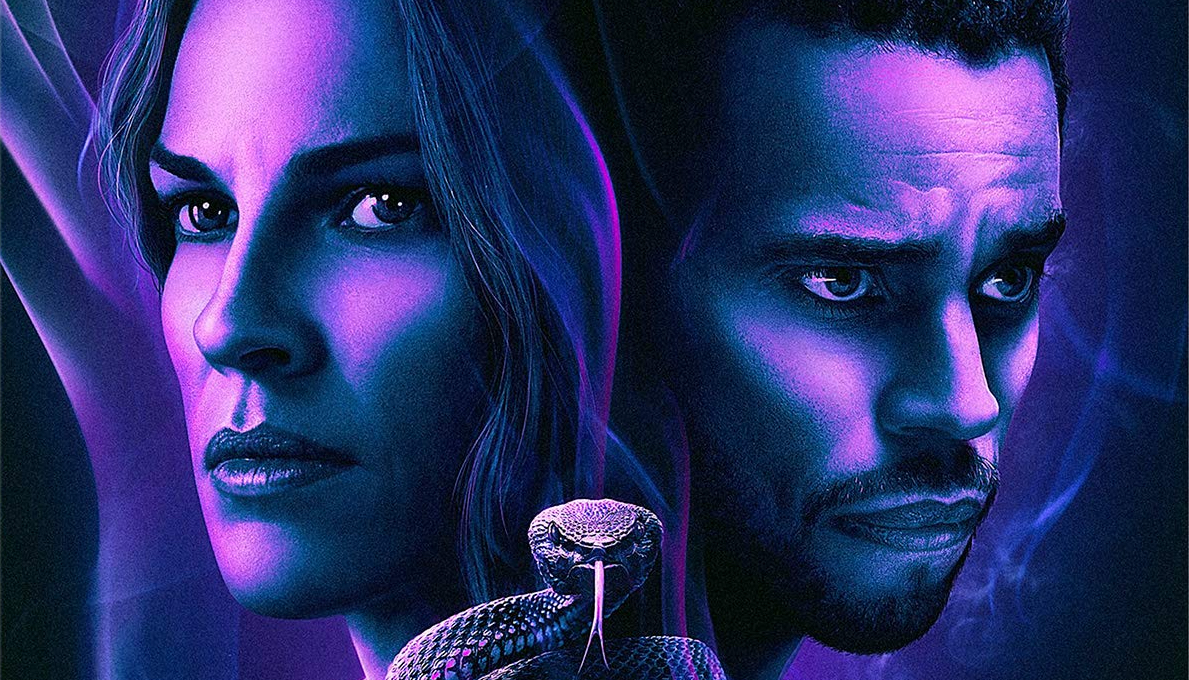 Deon Taylor’s filmography is the right kind of Genre material.  Exploitative enough to be highly entertaining and just enough adroit Social Commentary to give you something to chew on.  Fatale benefits from these and knowing performances by stars Michael Ealy and Hilary Swank.

Sports Agent Derrik Tyler (Ealy) is at the top of his profession that affords him all one could want, a beautiful house, a beautiful wife, beautiful life.  Though, not everything is what it appears.  Derrik has problems at home with Tracie (Damaris Lewis) distanced.  His partner at his Agency (Mike Coulter) is pressuring him to sell the Agency when he doesn’t want to.

What’s a guy to do?  Go to a bachelor party in Vegas that’s what.  Bad decisions are made on a drunken night with a mysterious beautiful stranger (Swank).  Thinking he can go back to LA and reboot with Tracie.  No sooner than they literally kiss and make up an attempted home invasion occurs leaving Derrik bruised and battered and a police detective Valerie Quinlan on the case. That police detective … the same mysterious beautiful stranger from Vegas!!!

The above plot is only about the first ten minutes of a narrative that delights in subverting genre conventions as much as it leans into them.  The script by Davide Loughery plays to Taylor’s strengths as a filmmaker with finding the right balance of social and genre to make a winning combination.  One that is familiar with the troupes of the sexual thriller will delight in some of the turns the film makes even deep into the narrative.

Though there is great supporting work done by Lewis, Coulter, and Tyrin Turner but it’s Ealy and Swank are center stage.  Ealy’s performance as Derrik is not as a slick crass operator, as many agents are portrayed, but a man who’s worked hard at every turn to make something.  Swank as Valerie is not just a crazy person with a badge, there’s a sadness, a loneliness, and an anger that fills the performance.  The way these two circle around one another is fascinating and isn’t just a series of Sex Scenes.  The way the power dynamic works with Valerie taking control at every moment even when it appears that Derrik is in control.

Fatale will entertain and surprise those not familiar with director Taylor’s work.  For those of us that have been watching for a for a while now it will only reaffirm what we know.  That Deon Taylor’s continues to grow his ability to mix the social commentary and genre material with style and aplomb.

The commentary by Director-Producer Deon Taylor and Producer Roxanne Avent Taylor deliver an informative and engrossing track about the film.  Details from the duo include his love for Lionsgate before he began to work with them, working with great Dante Spinotti, shooting in Los Angeles on a budget, working with Mike Coulter, working with Damaris Lewis, working with Michael Ealy, the construction of the film as a thriller and social commentary, the chaos of shooting a lower budget shoot, the chemistry between Ealy and Hilary Swank, casting Tyrin Turner, the music and score, Ealy doing his own stunt work, how Hitchcock’s Strangers on a Train influenced the film, shooting the sex scene, the social commentary embedded into the film and why it was placed into the film, how they came to cast Geoffrey Owens, the reference to The Hughes Brothers (fans of their debut will know exactly the scene), filming the ending, multiple endings, and much more.  The Taylor’s have great chemistry discussion regarding the production, anecdotes, and their ethos on films.

Deon Taylor: The Right Direction (6:02) – the featurette looks at Deon Taylor as a filmmaker and his style of direction on set.  Comments Michael Ealy, Mike Coulter, Geoffrey Owens, Damaris Lewis, and Deon Taylor.

Cinematography: Finding the Killer Look (6:59) – Deon Taylor discusses the visual look and references he was going for in the film and working with legendary Cinematographer Dante Spinotti and the pressure to create something as Spinotti had to leave for another production. Additional comments by Roxanne Avent Taylor, Michael Ealy, and Spinotti himself.

Alternate Ending (1:42) – It is different ending but this reviewer will not ruin what that ending is. You have to buy the Blu-Ray for that.

Fatale is the kind of genre material to get behind; smart, fun, and socially aware.  Lionsgate has filled the Blu-Ray with great special features.  Highest Possible Recommendations!!!!

Lionsgate’s Blu-Ray Release of Fatale is out March 2nd