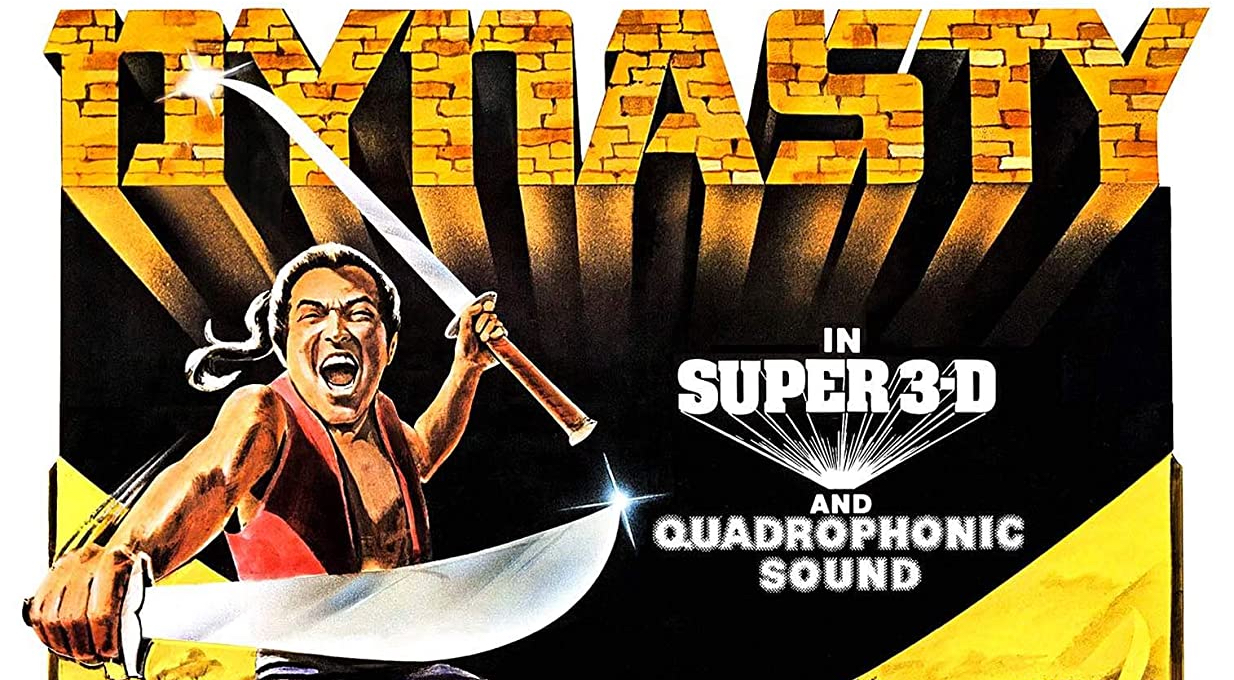 Martial Arts in the third dimension!!!  Kino Lorber and the 3D Archive bring us Dynasty in Super-3D and Quadrophonic Sound.

Not all Martial Arts films are created equal.  For every Police Story there’s a Miami Connection.  Both entertaining for sure but for completely different reasons.  Dynasty falls somewhere in the middle.

A Prince (Ying Bai) is accused of Treason.  Two assassins are tasked to bring the Prince to justice.  One assassin (David Wei Tang) chooses to infiltrate the Prince’s palace as a friend and possibly more… The other assassin (Tao-Liang Tan) chooses blunt force vengeance as the Prince is also responsible for the murder of his family.  It is only a matter of time until the three face off.

If one has seen many Martial Arts films from this era, one will know this story all too well.  Most of these types of Castle Intrigue films are dependent on the action and how it unfolds.  Luckily for Dynasty its ace is the 3D which is quite good.  Those watching in 2D will quickly tire of the sight gags and how the film is shot, which is solely designed for 3D.  Those that do watch it in 3D will find a unique experience.

Dynasty isn’t a bad film, but it isn’t the great wild experience that say Master of the Flying Guillotine was and still is.

The restored Quadrophonic Soundtrack is a true delight and treat.  The very active soundscape is a lot of fun when coupled with the 3D.  Those with a decent sound mix will be delighted by this restored soundtrack.

Note the feature (ran in 2D or 3D) does begin with a nice explanation:

“Dynasty has been restored from the best surviving 35mm elements and the stereoscopic vertical alignment issues from principal photography have been addressed.

However, there are baked-in Super-Touch 3D lens system anomalies which cannot be repaired.”

Those that already own the recent KL/3D Archive release of Wings of the Hawk can expect more of the same.  The sourcing from this release isn’t the greatest but the 3D Archive has done wonders with restoring the 3D to the best of its ability.  The image has only slight ghosting effects but that is more from the 3D system they used and its specific imperfections.  The film itself uses both depth and the patented throwing things or pushing things into the lens with dramatic effect.  The result is a fairly active 3D picture that has minor issues.  Overall 3D fans will be pleased to have another archival 3D release.

The 2D image is like the 3D has some issues with scratches and blemishes.  Because it was specifically shot for 3D with a system that had inherent issues those issues like Depth of Field and Clarity are more pronounced on this 2D image.  It’s generally a decent image but nothing should be put on 3D Archive’s restoration.

Super-Touch Lens System (10:23) – narrated by 3-D Expert Mike Ballew, Produced by Joe Tiberio this featurette is a very technical discussion of the Supertouch 3D/Optimax II camera system that 6 features were made with, including Dynasty, Revenge of the Shogun Women in 3D among them.  Created by Mike Finley and eventually purchased by Panavision this very eccentric 3D system was created as an over and under 3D format (Mike Ballew will explain).  Ballew with Tiberio’s graphics and editing help explain the system and the quirks that turned into issues (some that I discussed above in transfer).  It’s a great featurette for anyone that is curious about this particular camera system.

The House of Terror – Restored 1953 3-D Comic Book (1:49) – A great EC Comics style anthology of 5 tales of terror.  The 32 pages can be paused and read with clarity and no issue.  It’s a great addition and really does work if you’re using true 3D.

Go Away I Like You Too Much (2:41) – 3-D Music Video from The Simple Carnival by Jeff Boller.  The award-winning animated video presented in 3D.  It’s a nice little workout for anyone’s monitor.

Sold on Stereo, Commercial 3D in the 1950s (8:00) – is a Stereo Slide Presentations from Eric Drysdale. A great deep dive into 3D Film systems that people could purchase in the ’50s.  Drysdale has amassed some great 3D slides.  He gets into various uses (mostly sales from a sales perspective), and the first 3D film Bwana Devil (from 1952), and after the brief history there is a great selection of 3D images you can pause (3.5 minutes’ worth in fact).  Another great featurette that will benefit anyone with a 3D TV.

Inside a Mid-century Department Store (4:52) – is another Stereo Slide Presentation from Eric Drysdale.  The featurette tells a brief history of the Titche-Goettinger Department Store (based out of Texas) and how upon their first grand reopening hired a 3D photographer.  What unfolds is a truly interesting look at a Department Store in the Mid-Century. Another great featurette that will benefit anyone with a 3D TV.

Dynasty may be fun but KL/3D Archive has produced a bountiful amount of 3D-based special features that make this a HIGHEST POSSIBLE RECOMMENDATION!!!!

Kino Lorber’s 3D Blu-Ray of Dynasty is out now