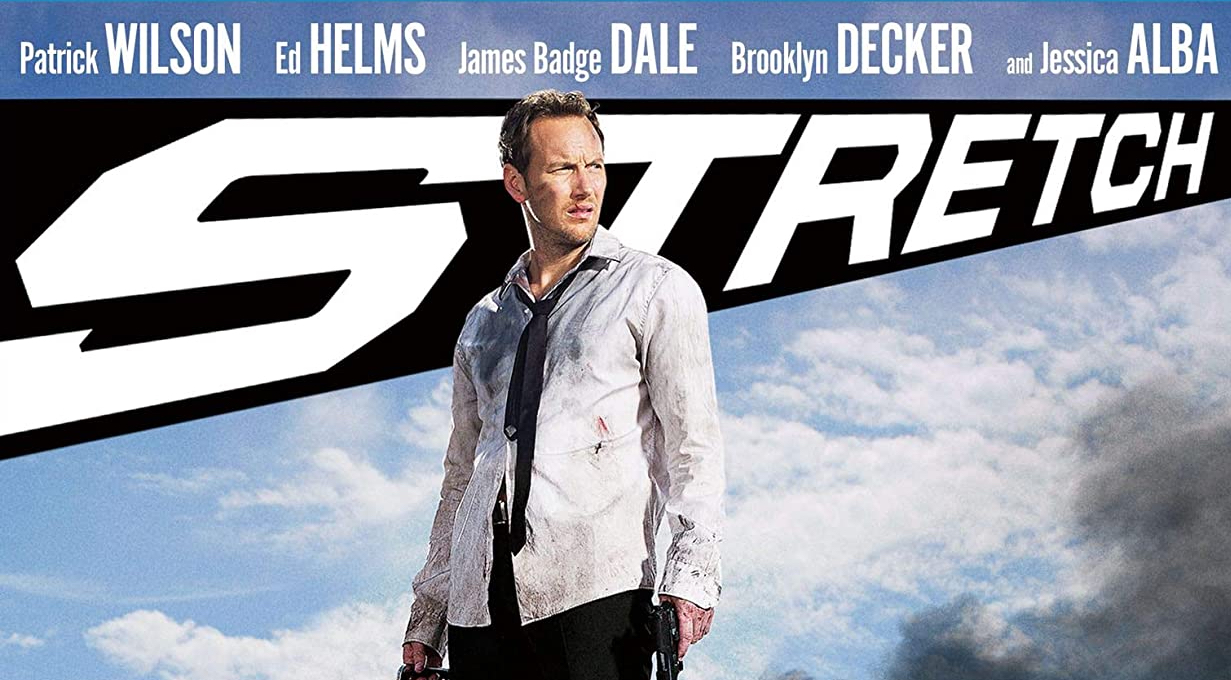 The Action Comedy Stretch finally makes its debut on Blu-Ray.  Kino Lorber has packed the Joe Carnahan directed film with some great extras.

Joe Carnahan’s Stretch reteams him with Patrick Wilson as a put-upon Limo Driver during a wild 24-hour day in his life.  The results are down-and-dirty action-comedy fun.

Stretch (Wilson) is a double-down on his luck Actor turned Limo driver in LA.  A gambling debt and inability to get around himself Stretch has till Midnight to deliver $6,000, which he doesn’t have, to his bookie or its lights out.  With the aid of the Limo Dispatcher Charlie (Jessica Alba), Stretch thinks that he can strike it lucky.  Billionaire lunatic Roger Karos (Chris Pine) may be the answer or his worst nightmare offering up a deal.

Part of the fun is the anything-goes nature of Stretch.  Made in the vein of Scorsese’s After Hours and other ticking-clock narratives.  The film moves from moment to moment with new characters and issues for Stretch to deal with.  The pile on that happens throughout the story is one of the delights that Carnahan has in store for the audience.  Part action and part comedy, Carnahan shows adept ability to shift back and forth and meld the two with style.

Wilson is hilarious as the put-upon Limo driver that’s in a tailspin he can’t seem to stop.  Few actors know how to take a beating and do so in a comedic fashion.  Wilson does so with aplomb and charm relishing each of the moments he’s beaten, humiliated, thrown, and generally just kicked in the balls for 90-minutes.  There’s a charm to the way that Wilson approaches the film with no vanity.

The film understands the dictum that “more is more” with wild cameos by Pine, Ed Helms, Ray Liotta, Norman Reedus, Shaun White, and of course David Hasselhoff.  Each brings their A-Game in the scenes they’re in but it is The Hoff that steals the show with a overwroughtly appropriate monologue.  Though Reedus’s moment is somehow both shocking and apropo for The Walking Dead Actor.

Stretch is a hilarious and wild action-comedy that is sure to make new fans of those that have not seen it.

The film was beautifully shot in Los Angeles and the Kino Lorber Blu-Ray presents that image perfectly.  The transfer provided by Universal is perfect. The sharpness, color reproduction, and contrast levels are reference levels.  The image grading gives the film a shot on 35mm look (though it was shot with an Arri Alexa – if IMDb is to be believed).

The newly recorded commentary from Carnahan with his children Maile and Rockne.  Carnahan hosts a rowdy, fun, and informative track.  Details include how the film came to be working with Blumhouse, the filming locations in and around Los Angeles, shooting an action-comedy for $5 million, Maile’s and Rockne’s experience on set and what they did during the production, the cameos that fill the film, the humor of the piece, Ray Liotta’s cameo (including a little inside joke), the changing of editors, Chris Pine’s hilariously filthy entrance, the use of songs on the soundtrack (the intended tracks they couldn’t afford), two gag reels (one that can be found online), Seijun Suzuki influence, the lack of a theatrical release, Carnahan’s feelings about the film now, and much more.  Make sure to stick around for the end credits as the trio does talk through the credits.  It’s a great track.

The other newly recorded commentary track by Eddy Von Mueller.  Von Mueller’s track is a very detailed informative track.  Details include a dissection of how the cast and crew came together for this low-budget comedy, how cameos, narration, and other items work in the lower-budget world, how the Blumhouse production scheme works in detail, the troupes that the film uses (eg the white male losing their shit), the Hollywood/Celebrity machine and how it relates to the film, the “ticking clock” narrative format, the career of Joe Carnahan, and much more.  The track is a truly informative and educational track that’s entertaining especially if you’re looking for something that is more about the mechanisms of making a film, independent cinema, and studio-produced products.

Drive He Said with Patrick Wilson (12:21) – the interview filmed during COVID-19 via Zoom with the Star.  Wilson has a great time recounting the how he got involved with Stretch, the production, working with Chris Pine, Jessica Alba, some great anecdotes, and so much more.

Stretch is good dirty R-Rated fun.  KL has given the release a beautiful release.  High Recommendations!!!

Kino Lorber’s Blu-Ray of Stretch is out January 12th