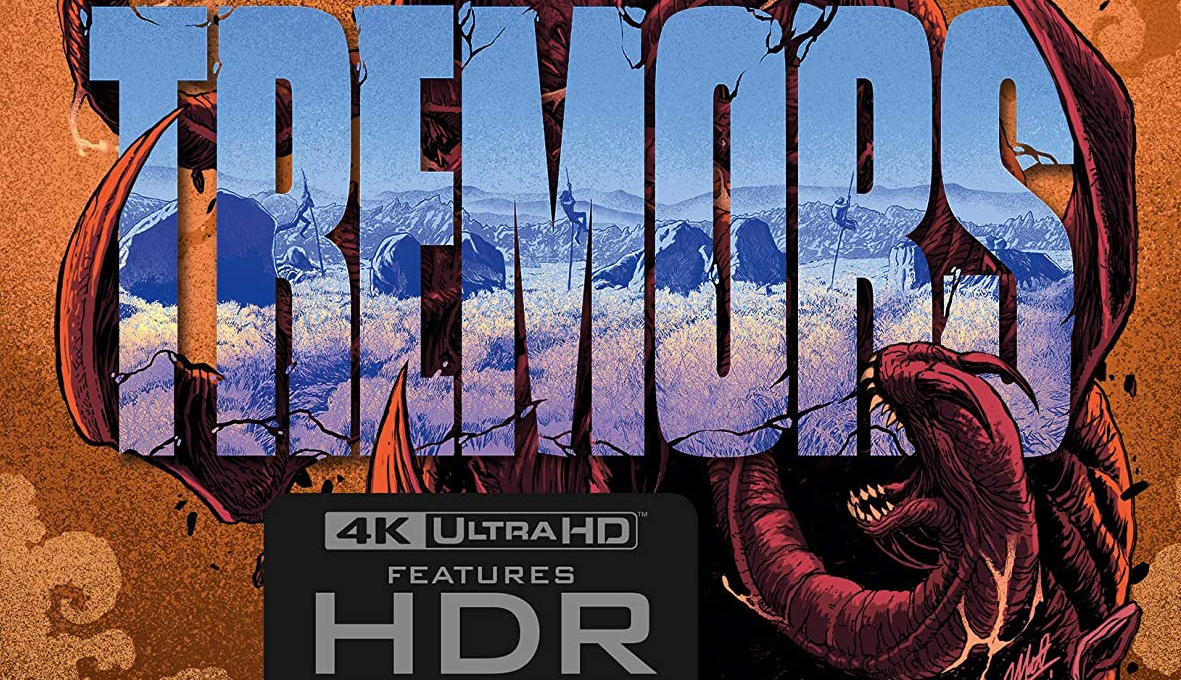 All the stops were pulled out for Tremors.  Arrow Video has created the definitive Home Video Edition with all the trimmings included a new 4K UHD Disc, newly created extras, and all the archival extras.

The Sci-Fi Horror throwback is still as entertaining as it was thirty years ago.  Ron Underwood’s directorial debut is as much Sci-Fi and Horror as it is Western.

Val (Kevin Bacon) and Earl (Fred Ward) are the modern equivalent of ranch hands.  They keep busy and, in some cash, being hired by the few residents of Perfection, Nevada.  On their last day before heading to the big town of Bixby they’re detained first by a job then something else.  Val and Earl discover what some of the residents of Perfection have.  Graboids, an underground creature with an appetite for humans.  Before long the entire town is besieged by these seemingly unstoppable force unable to escape.

This is the type of B-Movie that proudly wears its influences on its sleeve.  Unafraid to be exactly what it is, Tremorsdelights in its Drive-In origins.  Much of the film’s plot is silly, yes, but it always takes itself seriously.  Even when its tongue is planted firmly in cheek the film never moves away from its stakes.  The set pieces are adroitly Spielberg-ian in their design and execution.

Tremors could have settled for humdrum in its execution but Underwood’s direction and the clever script by SS Wilson and Brent Maddox always go the extra mile.  Every aspect of the film in fact goes the extra mile.  From the great John Ford influenced photography by Alexander Gruszynski.  To the sharp editing by O Nicholas Brown.  To the adroit casting of Bacon and Ward play a variation of Butch and Sundance. The equally sharp casting of Country Singing Superstar Reba McEntire and America’s Favorite Liberal TV Dad Michael Gross as Doomsday Preppers.

Everything in Tremors, even thirty years later, is smart elevated genre filmmaking.  More so than elevated, the Sci-Fi Comedy is wonderfully entertaining.  Underwood would go on to direct more successful films but none that were as smartly made and successfully executed as this one.

The new 4K restoration from the original negative by Arrow Films, approved by director Ron Underwood and director of photography Alexander Gruszynski is a miracle.  This Dolby Vision/HRD10 encoded transfer makes the most of the color grading of both.  The preference on this film is definitely the Dolby Vision which is slightly darker but appears to have a more defined color spectrum.  The grain structure and sharpness on both is a revelation.  Those that have owned multiple versions of this film will be thankful they have purchased this disc as it trumps all version.  Including the terribly DNR’ed Blu-Ray released more than a decade ago.  Arrow has corrected every single issue with that transfer had.

Note: The Blu-Ray version of Arrow released is mastered from the 4K master as the UHD.

The newly recorded commentary by director Ron Underwood and writers/producers Brent Maddock & S.S. Wilson is a delight for any fan.  A relaxed conversation recorded in June 2020 by life-long friends Underwood, Maddock and Wilson. Details include their shoot in and outside of Los Angeles, casting of actors Kevin Bacon, Reba McEntire, and Michael Gross, the practical FX work, the state of FX work at the time (non-digital), the use of miniatures, the homages of 50 sci-fi conventions, the massive amount of dust used, the various techniques they used to bring the graboids to life, deleted scenes, alternate openings, the original ending, and much more.  After thirty years it is nice to hear the creatives behind the film discuss the film as it plays.

The second newly commentary by Jonathan Melville, author of Seeking Perfection: The Unofficial Guide to Tremors.  This is a more critical, historical discussion of the film and its production.  By using his knowledge/research of the production, script development, and interviews with the cast and crew Melville gives us a commentary that is both highly detailed and informative track.  Details like who wrote what in the script by Maddox and Wilson, a detailed look at the various character actors in the film, the production design and creation of Perfection (which was built from scratch), the initial casting ideas for Earl, the crazy schedule that McEntire had to keep to make the film, the history of the filming locations, the development of the script and the balance of comedy and horror, the friendship between Fred Ward and Kevin Bacon, Bacon’s relationship with the film, a breakdown of how the infamous shootout was filmed, the use profanity and editing to get their PG-13, how the ending came together, and more.

Making Perfection (31:07) – a newly produced making-of featuring interviews with Kevin Bacon, Michael Gross, Ariana Richards, Ron Underwood, Brent Maddock & S.S. Wilson, Nancy Roberts (Agent for Underwood, Maddock, and Wilson), Jonathan Melville, Creature Designer Alex Gillis, Jamie Kennedy, and others.  Universal has pulled out all the stops for this beautifully produced documentary/featurette.  The polished and craft at making this featurette is astounding.  This 4K featurette is the future of special features.  It looks like a feature film or documentary.  The feature discusses the production and history of Tremors.  The only thing really missing is the participation of Fred Ward.

The Truth About Tremors (22:02) – is an all-new interview with co-producer Nancy Roberts.  Beginning with her origins as an Agent and starting her own Agency the interview is a deep dive into the behind-the-scenes drama of getting Tremorsmade. Details include working with Underwood, Maddock, and Wilson as clients and eventually a producer to develop of the film, how Maddock and Wilson work, brining Jim Jacks on as producer, and much more.  The interview includes script snippets and behind the scenes photos.

Bad Vibrations (10:47) – is an all-new interview with director of photography Alexander Gruszynski.  Gruszynski discusses his difficulty with shooting a “daylight” horror film and bring the same style and visuals as a “normal” horror.  Details include his childhood in Poland, seeing his first Western (which was Winchester ’73), the difficulties working on location, and much more.  The interview includes scenes and behind-the-scenes stills from the film.

Aftershocks and Other Rumblings (12:38) – is an all-new interview with associate producer Ellen Collett. Collett’s begins with a discussion how she started with Roger Corman and moved from there to Gale Anne Hurd and James Cameron. The details include how they setup Tremors, location scouting, and much more.  Some great behind-the-scene photos and b-roll footage are included.

Digging in the Dirt (20:59) – is an all-new featurette discussing the visual effects with the crew that created them. This featurette is all about the great b-roll and behind the scenes footage they procured.  Comments are by Robert Skotak, Christopher Warren, Gene Warren (III), Elaine Edford, and more. The participants discuss how they started in VFX and got involved with Tremors.  The best part is that the crew breaks down each of the bigger set pieces (including how they achieved the great Tremors POV in the dirt) and how they achieved the work.

Music for Graboids (13:35) – is an all-new interview with composers Ernest Troost and Robert Folk.  Both Troost and Folk do an audio interview that feels like a micro-commentary.  The two recorded separately discuss how Folk was brought on because the production did not like some of Troost’s musical cues.  This is a fascinating look at something that could have been very contentious at the time.  The featurette includes scenes from the film and behind-the-scenes photos and best of all – ALTERNATE MUSICAL CUES.

The Making of Tremors (44:15) – this archival documentary from 1995 (from the Signature Edition Laserdisc) directed/produced by Laurent Bouzereau is the kind of Old School nuts and bolts behind-the-scenes making-of that you expected during the era.  A bit dry but filled with volumes of anecdotes and details of the making of this film.  The documentary features comments by Underwood, Maddox, Wilson, all of the Warren’s (who were alive at the time of making it), all of the Skotak’s (who were also alive at the time), and many more.  It’s wonderful that Arrow Video has made sure this 25-year-old featurette is included on this disc where other would have not taken the time to include something that many would consider “unnecessary”.  This featurette is SD (480i).

Creature Featurette (10:26) – another archival featurette which is a compilation of on-set b-roll footage showing the making of the Graboids.  No sound is included other than a Musical soundtrack.  What you get is a great look into how the practical creature effects were developed by the FX crew, some of which is quite funny and fascinating.  This featurette is SD (480i).

Pardon My French! (16:18) – an all-new featurette that assembles the dubs of the TV-Versions of the film.  Some of this are great and hilariously off-kilter.

Electronic Press Kit – Broken down into four parts.  All begin the same way but focus on a different person or aspect of the film.

Trailers – which includes everything and the kitchen sink.  Kitchen sink meaning even the trailers for the DTV sequels!

Image Galleries – which include two drafts of the screenplay!

Extended interviews from Making Perfection – each is a deep dive into their own personal experience making Tremors, how they began in the business, what inspired them to go into their field, and what were the circumstances that got them to Tremors.  The interviews are definitely looser taking detours into various points of interest.  Because the interviewer cannot be heard clearly as they were not mic’ed up they have an interesting Typeface when the Interviewer asks a question or prompts a discussion point.  Each running at almost an hour these are fascinating looks into the making of the film and other points.

ArcLight Hollywood 2015 Q&A (71:11) – a two-part Q&A session with the cast and crew.  As explained in the opening intro the pre-screening Q&A was with the cast and the post-screening Q&A was the with crew.  Moderated by David Weiner the discussion is pretty great deep dive discussion by just about everyone that showed up in the special features but Kevin Bacon, Fred Ward, and Reba McEntire.  One should be warned that the moderator does open up the Q&A for audience questions and some of the questions are… as per usual with this kind of forum odd and awkward.

Gag Reel with Optional Commentary by SS Wilson (10:48) – SS Wilson explains that the Gag Reel was never shown anywhere but the wrap party and a few select screening.  Because of the nature of the way it was created this is definitely a more interesting look at the various flubs and short ends of the film.  Note this was pulled from Wilson’s own person VHS copy.  The commentary is sparse but informative when Wilson does chime in.

Recorded Live (8:12) – a fun and funny monster film made by SS Wilson during his time at USC Film School.

Dictionary: The Adventure of Words (16:26) – an educational short about the wonders of using the dictionary for a child who failed an elementary school report, directed by Maddox, produced by Underwood. The film features some clever stop-motion created by Wilson.

Library Report (24:32) – is another educational short about a teenage girl using the computer just “installed” in her house to write a report, directed by Underwood.  Featuring more stop motion created by Wilson it was in part the inspiration for Maddox and Wilson’s script for Short Circuit.  It should be noted that this short is hilariously and eerily similar to our current “Smart Home” functionality.

Tremors is giving the deluxe Collector’s Edition is so rightfully deserved.  This is a top ten release of the year.  HIGHEST POSSIBLE RECOMMENDATIONS!!!