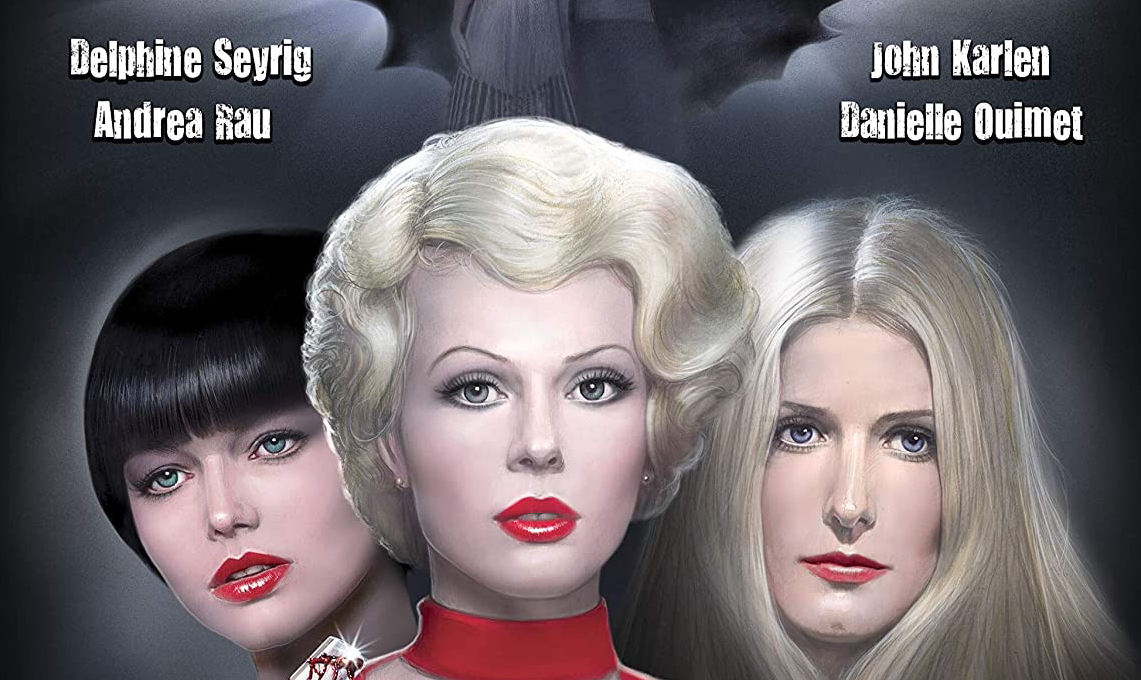 Daughters of Darkness gets a stunning 4K restoration that needs to be seen.  Blue Underground has pulled out all the stops with both Dolby Atmos and Dolby Vision encoding. Bonus points the UHD disc has all the special features!

The Hunger, and most modern vampire films owe a huge debt to Harry Kümel’s Daughters of Darkness.  It’s mixture of sexuality, violence, and S&M have been copied but rarely, if ever duplicated.

A couple Stefan and Valerie (John Karlen and Danielle Ouimet) have married on a whim. As they travel by train in France they move slowly towards their destination.  A coastal hotel in the offseason to spend their honeymoon without distraction. Though there is a distraction.  Distraction in the form of Countess Elizabeth Báthory (Delphine Seyrig) and her assistant Ilona (Andrea Rau).  What begins as a cliché with Stefan lusting after both women become trickier than that.  As we begin to find the Countess’s true intentions are not as straightforward as that.  Stefan, Valerie, the Countess, and Ilona all swirl around in a heady brew of sexuality, violence, and mystery that once it is apparent who is truly controlling this game it is too late for those involved to turn back.

There is always a fine line between what people perceive as art and exploitation.  Though Kümel’s film is sexually explicit and at times disturbingly violent it is never exploitative.  There is an artfulness to his mixture of the two and the exploration of S&M.  It never feels as though the sex and the violence are without purpose.  As Stefan dives deep into his exploration of Masochism it is never without consequence or character.  Films of this era, never set the context, thinking that the act is enough when it never is.  Because the film is a chamber piece, Kümel’s script gives us context in Stefan’s life.

Thought it is never unartfully done.  The film manages to show without ever being caustically blunt.  Rather as with all things in Daughters of Darkness, there is a haze of mystery surrounding motivations.  That also includes Countess Báthory.  Báthory the primary figure and central mystery of the piece is never a mystery.  We know what she is, without ever having to have someone say it.

The artfulness and how Seyrig creates a performance that is both explicit and implicit is what makes Daughters of Darknessmore than exploitation.  Seyrig brings the level of confidence and intelligence that she brought to the equally amazing Last Year at Marienbad.  Báthory in her hands is the puppet master controlling every action and calculating every movement and word she says.  The moment between Báthory and Stefan as she seduces him with the atrocities and blood lust in the past is as disturbing and sensual a moment you will ever find.

Daughters of Darkness at its end remains a mystery as much as it begins with more questions than answers.  Though this is where its power is drawn from.  Rather than explain everything, an audience is left to make their own conclusions.  Those conclusions though are as clear as they are shrouded in mystery.  Thus is the sensual beauty of the film.

Blue Underground’s World Premiere of the New 4K Restoration from the long-lost original 35mm camera negative, supervised and approved by Director Harry Kümel is nothing short of a miracle.  The film has never looked as good as it has on Home Video.  One would go as far as to say that Daughters of Darkness has never looked this good even in the theater.  The Dolby Vision HDR adds an almost hallucinatory depth to the color and black levels.  The sharpness and grain structure is perfect.  If there is a perfect way to transfer a film to Home Video this is it.  For any fan of this film, the UHD Disc is going to be a revelation.  It may well be a revelation for anyone who hasn’t seen it.  It stands as one of the best UHD discs yet produced.

NOTE: First and foremost, this reviewer would like to commend Blue Underground for including the special features on their UHD Disc.  This does not go unnoticed by Collectors.  The UHD Editions are costly to buy and it is appreciated that those extra dollars are put to things like this and the amazing transfer and paying for the Dolby Vision and Atmos.

The archival commentary by Harry Kümel moderated by David Gregory is informative.  Kümel manages to be quite loquacious discussing all manner of facts, anecdotes, and more from the production.  The way the cast came together because of the gathering of the budget dictated certain casting.  Alan Renias compliments to the film. The challenges of shooting in the middle of Summer and making it look like winter.  The chemical grading of the film at the time.  The sex scenes and his indifference to the nudity.  His thoughts on other Vampire films at the time and also in the past including Hammer Vampire films and Terence Fisher’s directed Vampire films.  The way they approached the psychological and physical sexuality and also the violence.  Val Lewton’s films influence on Daughters of Darkness.  His criticism over his work and some of the film’s look.  The post-production process.  The fact he did not really enjoy the production. There is so much more within this commentary and definitely worth a listen.

The second commentary, also archival, is with star John Karlen and David Del Valle is another winner.  Del Valle guides the conversation with Karlen.  Recorded during the Laserdisc days the commentary is well worth a listen. The actor discusses working with Delphine Seyrig, Danielle Ouimet, Andrea Rau and how they each differed in style, the sex scenes and what was cut out of the sex scenes, Kümel’s hesitance about the nudity, his honesty about how his age (he was 37 playing 22), production’s use of “direct sound” or sync sound (which is rare for a European genre film), working with Kümel, and more.  The actor does make leering comments about the nudity and makes some unfriendly LBGTQ comments also, not excused but this commentary is over thirty-years-old and expectations should be made for those.

The winner of the three commentaries is the newly recorded one by Film Critic/Historian/Author Kat Ellinger, which is a fantastic deep dive into this influential film.  Ellinger literally wrote the book on Daughters of Darkness.  Ellinger’s book Devil’s Advocates: Daughters of Darkness is now a must get after listening to her thorough commentary.  Ellinger is a wonderfully entertaining and informative speaker going through the books and sources that were culled form for the film, the history, and historical figures that were culled from, the production itself, the various actors and how they were cast, Kümel’s style as a director and his influences, where the film lines up in Vampire Film lore, and much more.  This is definitely a must-listen commentary for anyone that purchases this disc.

Locations of Darkness (21:37) – is an archival featurette with co-writer/director Harry Kümel and co-writer producer Pierre Drouot about the various European locations used in the film.  The Astoria in Brussels and The Hotel De Thermes are both visited and explored by the filmmakers.  They discuss the current look of the hotels and the featurette intercuts various scenes that show examples of the locations then (in the film) and now (in the interview).  Kümel and Drouot are playfully combative making sure to rib one another about the making of the film.  Kümel does discuss a lot of the work that went into matching the two hotels to ensure they connected in the film.  Random asides about the hotels and also the film like the use of color in the film, the lighting of the film, and much more.  A great side note; the interview because its archival does give one an example of how great the work on this new 4K Transfer.

Playing the Victim (15:31) – is an archival interview with star Danielle Ouimet.  The actor recounts how she got the part based in part because of her work in Valerie and the nudity in it.  The actress discusses working with Kümel, the sex scenes, and Kümel’s way of directing (much to her laughter), the first encounter with actor Karlen, working with actresses Seyrig and Rau, her first viewing, and more.

Daughter of Darkness (8:00) – is an archival interview with actress Andrea Rau.  Beginning with her work in Playboy and also acting in films in German, Rau discusses how that lead to getting Daughters of Darkness.  The actor discusses her comfort with nudity in the past and nudity in the film, the shower scene, and more.  German with English Subtitles

Radio Spots: four radio spots (0:30) and all played over a Movie Poster.

Alternate US Main Titles (1:56) – the title sequence has not been restored and appears to have been pulled from an actual film print.  The thing of note is the song and the font for the titles and credits are different.

Poster and Still Gallery – 120 images that are divided into sections; Posters, Advertisements, Lobby Cards, Stills, Harry Kümel, Video Soundtrack, and Book.  There is a wealth of great stills and images here.  The posters are especially beautiful with some great vintage Giallo inspired posters.  I was shocked at how many nude stills there were included.  The Next and Back chapter button on your remote allows you to navigate the gallery.

CD Soundtrack – Included is beautiful score by François de Roubaix. The CD is the full score with 24-Tracks listed.

Blue Underground has another winner with the UHD of Daughters of Darkness.  The revelatory transfer would be enough but they’ve added the iconic Soundtrack and a truly great commentary.  HIGHEST POSSIBLE RECOMMENDATIONS!

Blue Underground’s UHD of Daughters of Darkness is out now