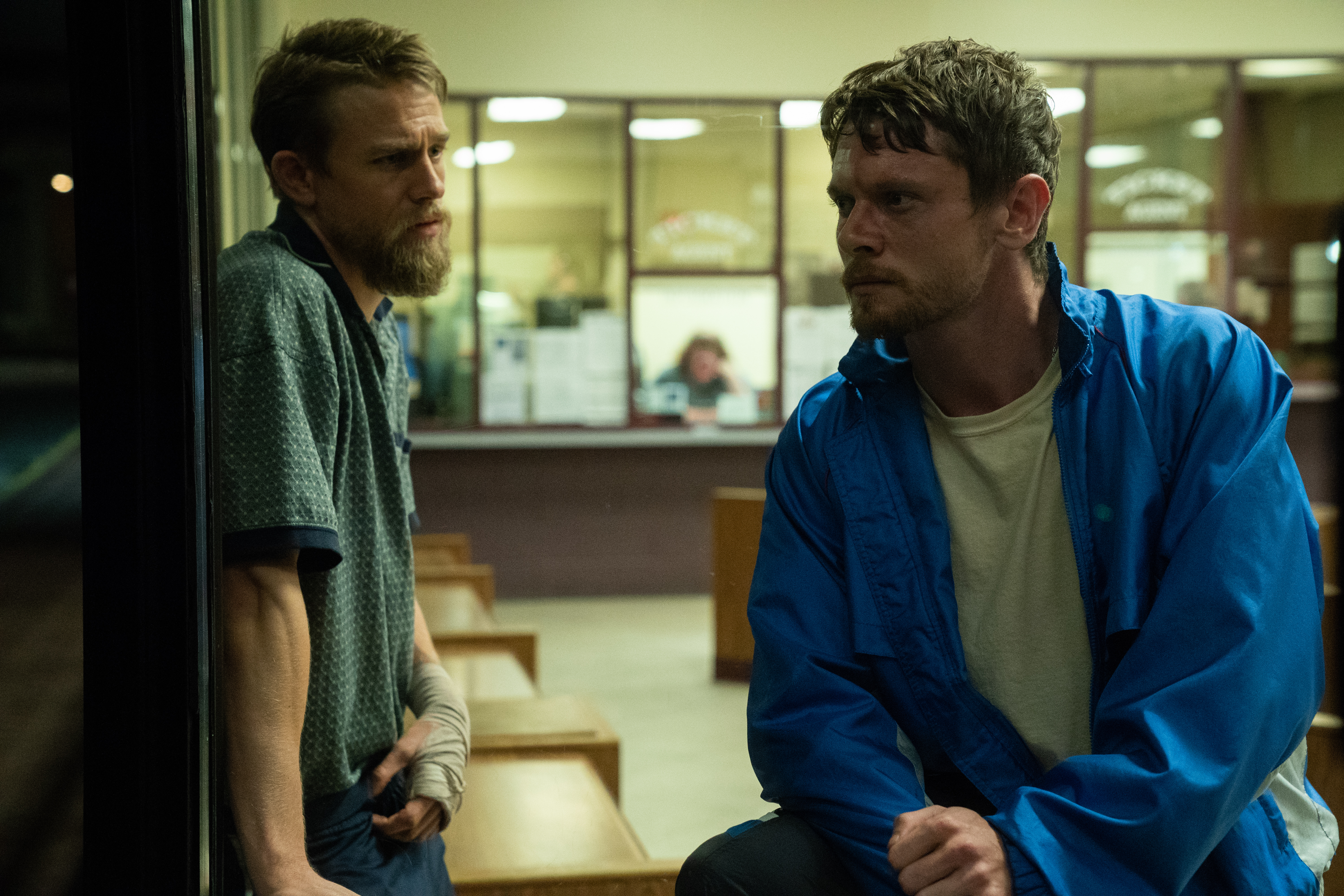 Max Winkler makes a Boxing movie with little to no Boxing seen.  Jungleland is a story about brothers.

The most refreshing aspect about Jungleland is its lack of boxing or boxing scenes.  Rather writer/director Max Winkler creates a story about a pair of brothers on the fringes of society and the catalyst that could tear it all apart.

Lion (Jack O’Connell) for a boxer is on the wrong side of his twenties.  After an incident involving his brother Stanley (Charlie Hunnam), Lion has been reduced to bare knuckle fights on the outskirts of society.  Lion and Stanley keep the dream alive hoping beyond hope to get a chance at a big fight.  An offer by Pepper (Jonathan Majors) after a fight gone wrong could be that big fight and last chance.  The offer comes with strings, strings in the form of delivering Sky (Jessica Barden) to Yates (John Cullum).  Those strings could cost Lion and Stanley more than just their last chance as Lion and Sky begin to connect in a way Lion has never connected with anyone.

Winkler’s film isn’t about a burgeon romance, or boxing, or a last shot.  Jungleland is about those people in Springsteen songs.  Those that have past their expiration date but still fight.  They fight for something beyond their current status.  Lion and Stanley are nomads.  Lion still dreams his dreams, but Stanley is beyond that.  He just wants enough cash to survive and maybe get more.  Lucky just strikes them down when they’re already on the floor.

Winkler’s film does romanticize a bit but never to the point of some sort of fantasy.  Hunnam has aged into Stanley perfectly.  The actor’s model good looks are aging into weathered good looks to the benefit of Hunnam’s acting ability.  He’s always been good but either accents or his looks have hindered him.  Here he’s allowed himself to be the battered bastard that it feels he’s always wanted to play.  The role of Stanley fits the actor like a glove. The moments where he charms a bachelorette party attendee (Meredith Holzman) is straight out of the Paul Newman playbook.  Though Hunnam has done this before the difference is the age and milage have started to add up (in the best way) to give him the character to go along with the charm.

O’Connell is solid here as the “could have been a contender” punch-drunk boxer Lion.  Though it feels like too much is cribbed from other boxers with a ten-pound heart and a two-ounce brain.  The biggest criticism is that the film is set in the New England area and O’Connell (along with Hunnam) is hitched with the Boston Accents that were cliches a decade ago.  O’Connell’s work is elevated in his scenes with Barden.  The two have a strange chemistry that works for the film rather than against it.  Luckily, the film stays away from big moments of romance.  Both Majors and Cullum are the scene-stealers in their brief roles.  Majors especially as the actor continue to provide that he’s a star in search of a huge role to make him a super star (apologies to his work in Lovecraft Country).

The film is more akin to Scarecrow or even Midnight Cowboy than The Fighter and Rocky. Pushing relationships rather than the sport to the forefront.  Even its final fight matters less than what is happening outside of the ring to Lion, Stanley, and Sky.  You have seen Jungleland before, but Winkler and Company elevate the material but never giving us the easy cliches.