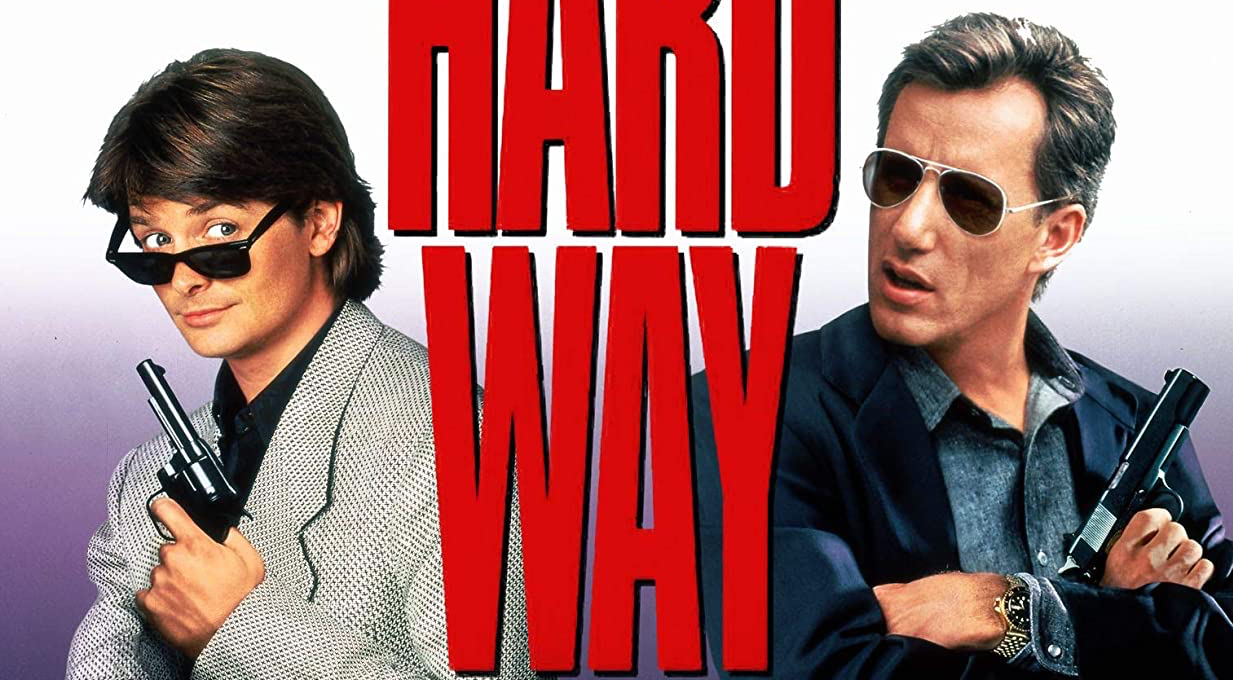 The Hard Way is the sort of R-Rated Buddy Comedy that is few and far between nowadays.  Much like 48 HRS, the film is as nimble enough to balance between hardcore action and comedic beats with equal aplomb.

Nick Lang (Michael J Fox) is the biggest actor in Hollywood. Lang wants nothing more than to shed his Young Heartthrob status to be a more serious actor.  The Number 1 Box Office Actor in the World gets the NYPD to allow him to ride along with serious Homicide Detective Lieutenant John Moss.  Moss is on the trail of a serial killer The Party Crasher (Stephen Lang) is taken off to “babysit” Lang.  If we know anything about cops in these situations, we know that an actor, let alone one of Lang’s stature, isn’t going to stop this dogged detective from catching this serial killer.

The film’s concept is played straight and allows for the comedy coming from the characters rather than trying to comment on the situation.  It’s Lang and Moss’s approach to everything in life differently where the comedy tension is formed.  Lang finds everything Moss does as fascinating and research for his next role.  Moss finds Lang as an annoyance that seems to complicate everything in his life be it his work, or even his personal life and a burgeoning relationship.

The moment that shows The Hard Way working at its best is the Subway set piece.  The way that the film is able to shift between comedy and action so fluidly.  The subway punks are a true menace and Lang is unable to deal with them is both scary and funny.  Adding Moss into the situation being a true badass turning his menace up to an 11 facing off against said punks is the kind of action beat seems to come straight out of a Lethal Weapon film.

The Hard Way is the type of action-comedy that gets the comedy and action right.  It’s a film that deserves to be rediscovered.

The Hard Way makes its debut on Blu-Ray with a solid transfer. The Blu-Ray’s handsome image perfectly represents the Widescreen photography.

The newly recorded commentary by Director John Badham, Producer/2nd Unit Director Rob Cohen, and hosted by Film Historian Daniel Kremer.  Beginning with Badham and Cohen talking about how they worked together as almost a co-directing team on The Hard Way this is just a fascinating discussion about the film.  Kremer does a great job of guiding the very loquacious gentlemen. Some of the anecdotes they discuss are joking about Fast and Furious (Cohen directed the first film), shooting in NYC and the various locations, the casting of Stephen Lang, LL Cool J, the song Mama Said Knock You Out, Gene Hackman and Kevin Kline almost being cast, the buddy cop genre, NYC of the 1990s, how much improvising was on set, a Sean Connery, working with Christina Ricci and Anabella Sciorra, some great stories about The Wiz (which Cohen produced), how they ended up with two cinematographers, working with Michael J Fox, and much more.  Badham and Cohen give a hugely informative commentary track that’s not just people discussing what’s on screen.  Well worth your time to listen, especially if you’re a fan of the film.

Kino’s Blu-Ray of The Hard Way is a winner.  Recommended!!!