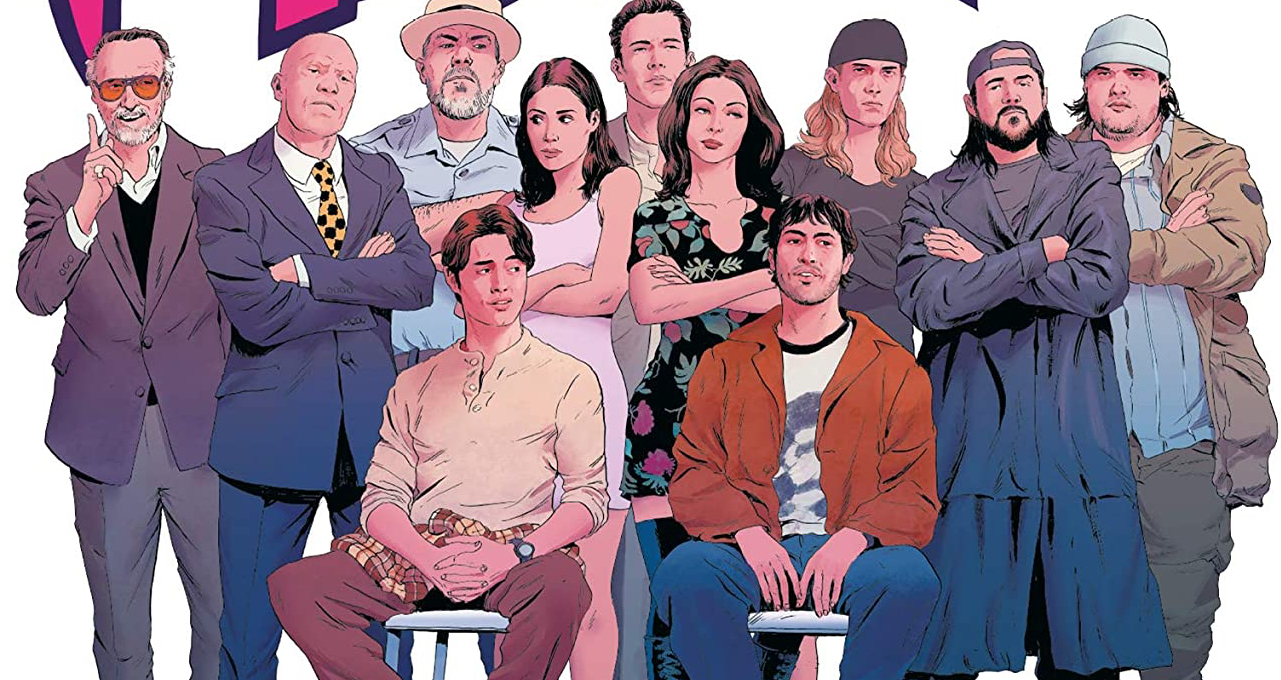 Arrow Video has pulled out all the stops for the 25th Anniversary Edition of Kevin Smith’s Mallrats.  Three Versions, a host of special features, and a beautiful 4K restoration truly gives this film the Blu-Ray it deserves.

This is my preferred cut of Mallrats.  At 94-minutes it perfectly contained comedy.  Smith’s venture into studio filmmaking really should have gotten a better shake.  The director has said numerous times that Mallrats was ahead of its time.  It definitely is with its raunchy comic book jokes, its attitude, and Stan Lee cameo. The Movie feels like it would be more at home in 2020 than in 1995, where the zenith of popular culture was not the MCU or even Marvel Comics.  Smith’s films, especially Mallrats, are about guys who want nothing more than to fix their own screw-ups but being hindered by themselves.  Though their loud, oftentimes vile blusterous rhetoric may say otherwise.

TS (Jeremy London) and Brodie (Jason Lee) may be the most immature of Smith’s leads but there is a humor and friendship between the two that strike the right tone of early 20s malaise. Smith captures that yearning to still “fuck around” but knowing that time is quickly coming to an end. This is seen through TS and Brodie’s respective paramours dumping them. Brandi (Claire Forlani) and Rene (Shannon Doherty) have matured beyond TS and Brodie.

Rene’s diatribe towards Brodie is funny not because she’s screaming at him but because everything she says is the truth. The truth that no matter how the film ends, eventually, Rene will Brodie, and Brandi will leave TS. Because of their inability to mature. We would see the evolution of this theme, young men’s refusal to grow up and mature, blossom with Smith’s brilliant Chasing Amy.

Which appears to be Kevin Smith’s preferred cut feels like more of a Smith joint than the theatrical. Running at over 2 hours has the feel of a Howard Hawks or Quentin Tarantino “Hang Out” Film.  Characters talk, talk, talk, and talk some more.  They do it sitting, standing, and walking.  It’s not a bad thing per se, especially with Smith’s witty and verbose dialog said with the machine gun’s pace.  The best part is the opening scene is restored giving us context to Svenning’s hatred of TS, and with good cause.  Where the Theatrical cut runs and keeps running until its end, the Extended Cut is allowed to breath.  If you love Brodie, TS, and the gang this is the version you’ll probably spend most of your time with.

Hilarious in its own right.  The TV Cut by cleansing all the language out of the film creates some truly stupid and hilarious moments. Like exchanging Farting for Vomiting from Brodie’s breakup speech, or the reason why Trisha is writing her book, or the decision to not cut the love scene in the elevator, the loss of the “stink palm” description but its aftereffects to Mr. Svenning very present, the zoom out of the nudity in the psychic scene, a LaFours and Trisha scene that makes the ending crawl payoff better, the odd way they deal with the Ashley Hamilton plotline, and much more.  It is an fun and interesting watch.

Brand new restoration by Arrow Films of both the Theatrical and Extended cuts of the film, approved by director Kevin Smith and cinematographer David Klein.  Smith is fond of saying that his films are not beautifully photographed.  I would politely disagree with the man as Mallrats in its three incarnations here pops off the screen.  The 35mm photographed film is beautifully transferred to Blu-Ray.  The 4K restoration here definitely shows a huge uptick in quality from previous DVD Editions.

Note: The TV Cut does have some very SD inserts for the scenes that were cut down for length.  But it does show you just how far image quality has come in close to two decades (the TV Cut was released around 1999 or 2000).

NOTE: In the press notes, I’ve seen about this edition the Extended and Theatrical Cuts are on Disc One which is not true.  The Theatrical resides with most of the special features on Disc One and Disc Two houses both the TV and Extended Cuts.

Introduction by Kevin Smith (12:31) – the ever-loquacious Smith discusses the film specifically the bombing of the film and how from the ashes comes the cult comedy.  Smith’s epic introduction is as entertaining as hell as he discusses various personal asides about the film and how things have come full circle with the film.

The archival audio commentary by Smith, producer Scott Mosier, archivist Vincent Pereira, and actors Jason Lee, Ben Affleck, and Jason Mewes is as much a riot as it was when it was released in 1999 for DVD.  The group continually joshes each other while giving out a lot of information about the production, the editing, and release of the film.  Without the hindsight of the years since Smith is still licking his wounds from the failure of the film.

My Mallrat Memories (29:85) – is an all-new interview with Kevin Smith about the origins, references, and making of Mallrats.  Some of the anecdotes that Smith regales us with are how the film came to be, meeting Sean Daniels and Jim Jacks, the procuring of the Mall, Casting Director Don Phillips and the casting (including what could have been), the cluster fuck of the casting process, rewriting for Stan Lee (and getting him into the film when he was not originally written for the part), the production of Mallrats and how it was different going into the Studio System, the real life inspiration for Brodie Bruce (Jason Lee’s character), the rising cult status of the film with the rise of the internet.  In lieu of a new commentary this interview is great recounting of the making-of Mallrats with the hindsight of time.

Mr. Mallrats: A Tribute to Jim Jacks (12:57) – an all-new featurette with Kevin Smith as he pays tribute to the Producer of Mallrats and friend Jim Jacks. Smith gives a semi-autobiography of Jacks going from film fan to film booker to finding Blood Simple and working with the Coen Brothers.  Smith’s discussion is as per usual hilarious and insightful.

Blunt Talk (9:59) – is an all-new interview with Jason Mewes.  The actor that plays Jay discusses his early life and how he came to be cast in Clerks and Mallrats.

Hollywood of the North (10:13) – a new featurette on the making-of Mallrats.  Uniquely, this featurette is animated behind-the-scenes look at making the film from the Minnesota below the line crew that made the film.

When We Were Punks (6:08) – is an all-new interview with Cinematographer David Klein.  Klein discusses how he met Smith and Mosier in Film School, the Mallrats experience, being dropped from Dogma, and coming back to the View Askew universe.

Deleted Scenes (1:02:48) – Hosted by Kevin Smith and Vincent Pereira, the hour worth of deleted scenes that include the Alternate Opening Scene (from the script), the original opening, alternate takes that relate to the opening scene, Svennings original confrontation of TS, and much much much more.  Smith and Pereira are great at discussing the context of the deleted scenes.

Outtakes and Behind the Scenes Footage (8:12) – odds, ends, and flub footage that wasn’t included in the deleted scenes.

Erection of an Epic: The Making of Mallrats (22:09) – this great archival making-of the film is from the 10-year-anniversary DVD.  Starting with comments by critics Kenneth Turan and Janet Maslin discussing the critical failure of the film starts this very interesting documentary.  With comments by Smith, Affleck, Lee, Mosier, Klein, Mewes, Rooker, Jim Jacks, Sean Daniels, Jeremy London, Rene Humphries, Stan Lee, Don Phillips, and just about everyone that worked on the film.  A large portion of the featurette is spent on the failure of the film and its rise in its cult status.  Affleck in particular is hilariously on point with his comments about the film and his casting in it.

Q&A with Kevin Smith (9:01) – Smith discusses a feature discussing the Q&A for the 10th Anniversary Screening.  He mentions a Special Feature that allows you to view the film with the Anniversary screening.  The discussion is Smith is his usual self-deprecating … well self.

Build Me Up Buttercup Music Video (3:38)

Soundtrack EPK (4:02) – this archival ad for the Soundtrack for Mallrats with Kevin Smith and Scott Mosier discussing the various tracks and bands.

Behind the Scenes Stills – the 147 stills contained in the gallery are various behind the scenes, and production stills for the movie.  The gallery can be navigated by using your next chapter button and does not have a play all option.

Comics – are the 14 comic book covers created especially for the opening credit sequence by the various, legendary now, artist (the likes of Rob Liefeld, Jae Lee, Mike Allred, J Scott Campbell, Mark Silvestri, and more).  The gallery can be navigated by using your next chapter button and does not have a play all option.

Kevin Smith’s Mallrats is a Classic 90s Cult Comedy.  Thanks to Arrow it’s made the jump to Blu-Ray in a super deluxe edition.  HIGHEST POSSIBLE SNOOGANS!!!