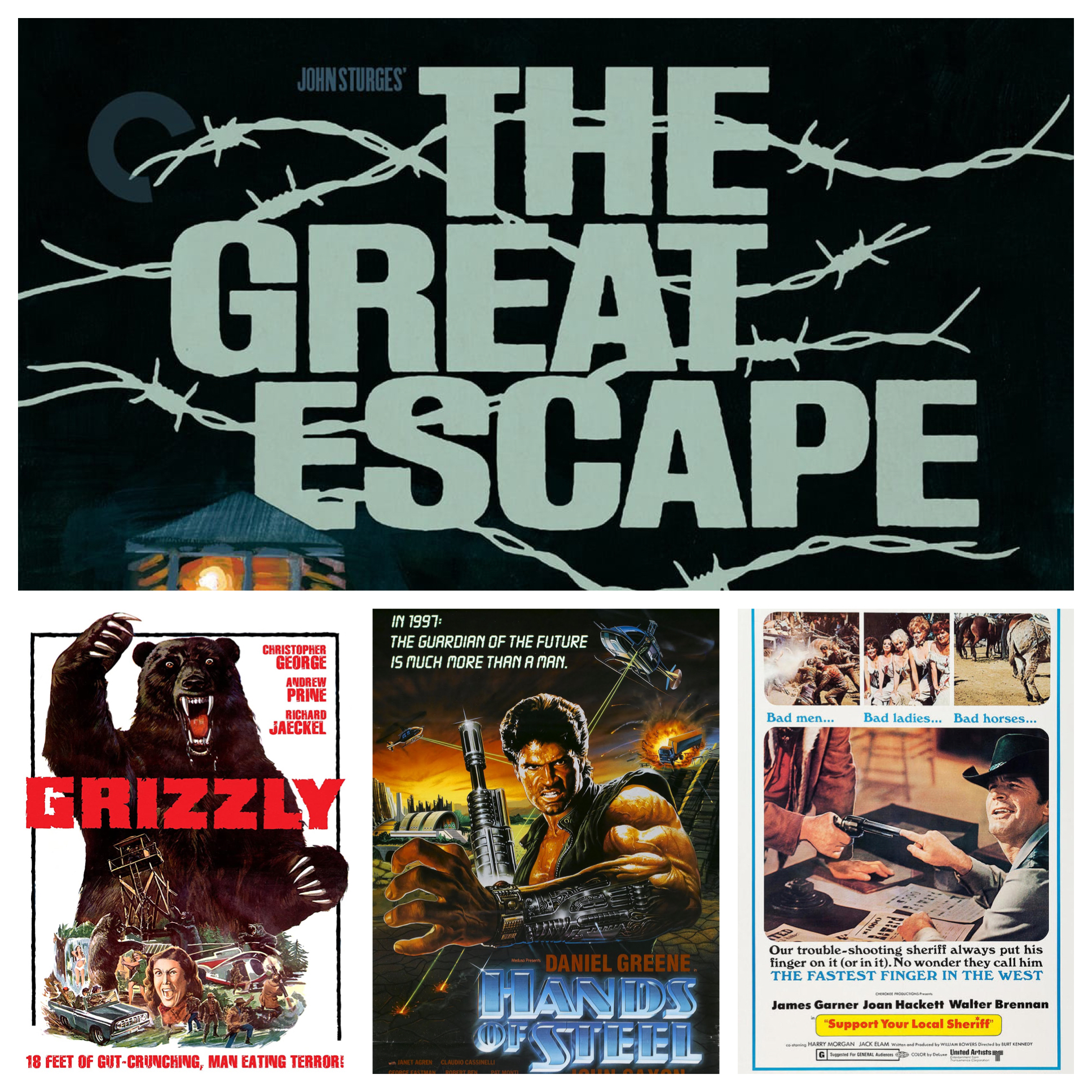 Part Journal.  Part Recommendations.  Part Keeping My Sanity. As I deeper dive into my rewatch/catchup lists a personal curation begins to form in my head. One thing leads to the next. My personal eccentricities as a filmgoer and cineaste are coming out to play.

I will say this much. Amazon Prime and The Criterion Collection Channel is where it’s at if you’re looking to devour cinema. They have a particular kind of cinema. Something that Netflix does not have. Netflix has your Streaming Series down pat. Don’t go to them for anything pre-2000 filmwise. You’ll notice that all the films are recommended from the two above streaming services.

As we’ve begun this I’ve started to form some bigger programming for myself that I plan to do in the coming weeks here. One that I’m going to be starting this week and one that I’m going to do right after that. The next one won’t involve streaming but rather physical media. The other will be via Shudder (you probably already know where I’m going to go with it).

Until then, we’ve got some good shit and some really bad shit. Take everything as you will…

Two films in the same genre but entirely different tones and direction.  This results in two legendary films.

Billy Wilder is at his best when he’s at his most cynical.  You may think this POW Thriller is a cheery affair but underneath lies a seething angry film.  A film that’s as pissed off at humanity as much as it loves its resilience.  The perfect film for 2020 and the bullshit we’re seeing play out.  Stalag 17 based on a play of the same name concerns itself with the group of American Soldiers and the possible mole/spy in their ranks.  The main suspect is Sgt. JJ Sefton (William Holden) a crafty-shifty jack-of-all-trade black marketeer.  We know that Sefton isn’t guilty but that’s not the point.  The point is to watch as everyone turns on the entrepreneur.  If you feel angry at the POWs, that’s the point, you should be pissed… Wilder’s films are at their best when they’re treading in complicated waters and this one is a shining example of that.  Holden shines as bright a star as there ever was as the piss-and-vinegar JJ Sefton.  The black and white photography is some of the best and has inspired the likes of Martin Scorsese and Steven Spielberg.  Holden’s final bit of dialog to his “compatriots” is the best cynical piece of terse realism that’s ever come out of a Wartime Drama.

The Great Escape (Available on Amazon)

On the other end, you have John Sturges’ fun-fun-fun funny POW Adventure film.  If you’ve never seen The Great Escape is lives up to its name.  I still remember seeing it for the first time on Criterion Laserdisc (it makes me happy that the film is returning to the Collection in the summer).  It’s big ballsy cast. It’s crackerjack script.  It’s pitch-perfect direction.  This film is designed to entertain.  I ate it up the first time I saw it, and it continues to entertain and delight me close to 30-years later (fuck, I am old).  The storyline I was drawn to this time is the friendship between Hendley (James Garner) aka The Scrounger and Blythe (Donald Pleasence) aka The Forger.  It’s a simple story that strikes the right emotional chord as the two men seem the unlikeliest of cellmates but quickly forge a bond.  That bond plays out emotionally as Hendley takes responsibility for his friend the bird watcher.  I never realized it but their story of bonding and friendship is the soul of the film.

The stars align and you get a perfect star vehicle for the perfect star.  James Garner has never been as effortlessly charming and funny as he is in Burt Kennedy’s masterpiece Support your Local Sheriff.  A riff on both High Noon and Leone movies but done with the skewed comedic point of view.  Garner plays a man who wants nothing more than to go to Australia in search of Gold.  A layover in a gold mining town ends with him taking the job as the town’s sheriff. Using his wits rather than his very capable guns is what sets him apart from most of the heroes of the era.  It also makes the film impossible to resist.  Every single piece of casting is spot on from Jack Elam as Garner’s put upon deputy to Bruce Dern’s dimwit baddie to Harry Morgan as the Mayor of the town.

Lighting in a bottle is impossible.  The proof is here.  Burt Kennedy teams up with Garner and all the cast of Support Your Local Sheriff with good, not great results.  It’s funny and charming but not in the way that the original is.  Rather than making a sequel to the original, Kennedy has concocted a sort of follow up in the way that Leone made his Dollar Trilogy. Smartly, the film retains the Garner-Elam partnership, just skewed slightly.  Garner here is more rascally scoundrel than smartass best in the room as he was in the original.  It does lead to some great moments but the original is the better of the two.

The Rockford Files (Available via IMDB TV through Amazon)

It started as a fluke.  I wanted to watch something that was essentially “comfort food”.  Comfort food is different things to different people. I love detective fiction, in all its forms.  Movies, Novels, TV.  Now, mind you I said detective fiction.  I’m not about SVU.  Procedurals, with few exceptions, bore me to tears.  I’m in it for the characters.  So, I needed something that felt like my favorite detective film of all time Altman’s The Long Goodbye.  Something that was shambling shabby down-on-his-luck PI kind of thing.  I got that and then some with The Rockford Files.  What I love so much about the series is just how much of its DNA is in the work of Shane Black.  I can imagine that Black loved watching Garner’s rambling Jim Rockford workout of his Trailer in Malibu and beat the bad guys because they always underestimated him.  There is so much of The Rockford Files in The Nice Guys, Black should have paid royalties.  Give it a try, you’ll find comfort in the formula and Garner’s Jim Rockford as I have.

The filmography of Bill Girdler has some doozies.  None more than Grizzly, which may as well be a shot-for-shot remake of JAWS.  Not to say that’s a bad thing.  Like the Spielberg Blockbuster, this film concerns itself with an on the loose animal. Rather than being a great white shark, Grizzly, as can you imagine, has a bear as its primary antagonist.  Grizzly much like Manitou is played so seriously that you can’t help but laugh.  It also helps that the 2000 lbs bear terrorizing the mountain town is smarter than 90% of the folks hunting it.  If you haven’t seen this one, you’re in for a treat. Also, this will prepare you for the 30-years-in-the-making-but-just-completed sequel Grizzly 2 scheduled to be released soon.

Deathstalker & Sorceress (Both Available on Amazon)

Why did Rated-R fantasy movies have to have so much goddamn Rape in it?  I would recommend both these titles but the amount of rape in both of them is just… disgusting. This just makes me worried about a revisit of The Sword and the Sorcerer whenever I get around to it.  Meanwhile, fuck both these movies.

Wheels of Fire (Available on Amazon)

Yup, this fucker too, Rape aplenty.  This one has so much that it’s a supporting character’s fucking story arc.  I shit you not.  This character is only there to be gang-raped.  So, fuck this movie too.

An Arm Wrestling Movie better than Over the Top…

Hands of Steel (Available on Amazon)

For people that love Italian knock-off genre films seeing the name George Eastman show up is a sign of a particular kind of film.  In Hands of Steel Eastman shows up as Raul, the foil to Paco (Daniel Greene) our hero, a government assassin that’s part man part machine and all badass.  My favorite part is that Paco gets bend out of shape in a murderous way because Paco becomes the Arm Wrestling champion at a Rest Stop/Motel.  Yes, you read that right.  The Arm Wrestling is like 18% of the movie but I guarantee you that 18% is better than 100% of Over the Top.  Bonus points to the film for casting John Saxon as what else… a Federal Agent.  Warning: the film is about a virus that has wiped out most of the world in 1997 so it may trigger certain people BUT it’s about as serious as the entire film.

I close this edition of Preoccupation with a humdinger-doozy of a film.  When you’re searching a streaming service and you go into a deep dive you find gold. Other times you find shit.  This is one of the former and not the latter.  Nightmare at Noon is the kind of riff on what Carpenter does best but does it in a completely different way and somehow manages to be its own badass piece of cinema.  The trifecta of badassdom that is Wings Hauser, Bo Hopkins, and George Kennedy play three men that are thrust into a George Romero style situation that Brion James’s nameless albino character has started.  As Woody is fond of saying, “someone’s poisoned the watering hole” and the citizens of a tiny nowhere western town begin to rage, get homicidal, and bleed green blood.  It’s all done with a certain amount of style by director Nico Mastorakis who if you’ve seen Zero Boys or Hired to Kill, you know what you’re in for.  Though Nightmare at Noon is the best of the three.

That does it for now.  I’ll be back in a few days, with a special multi-series Preoccupation.