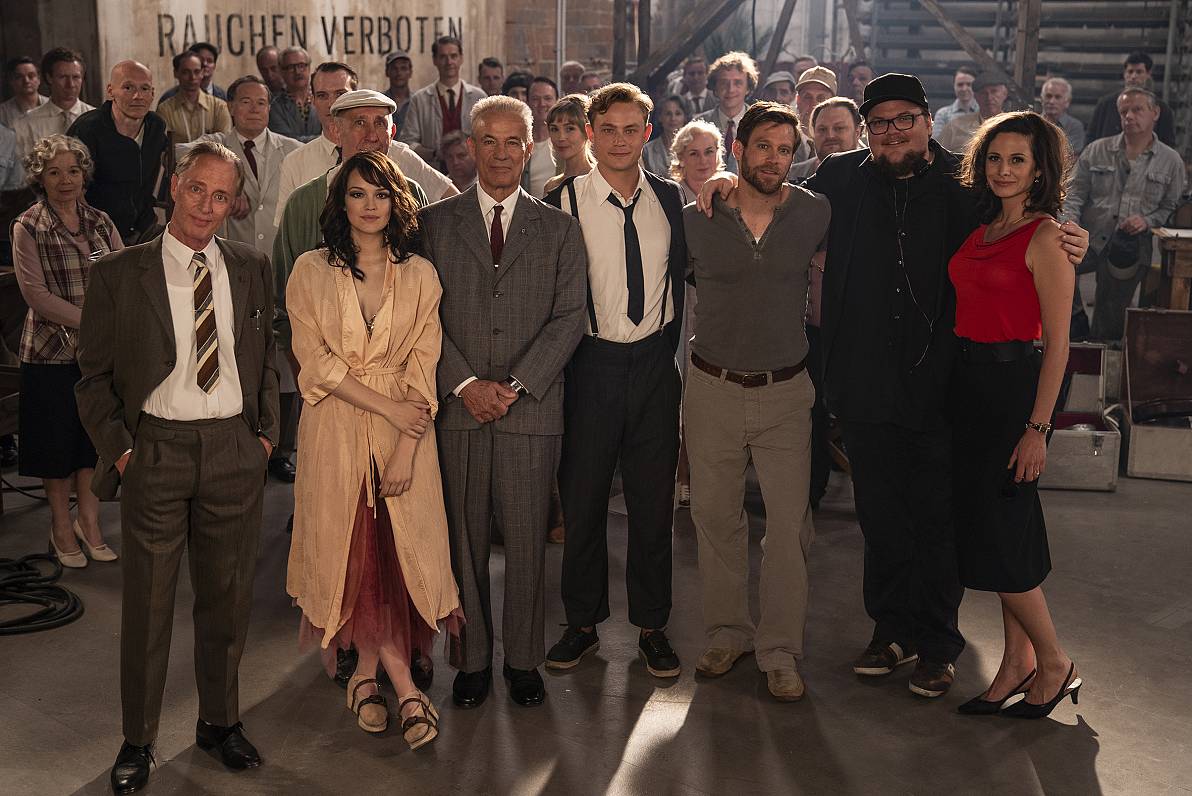 Traumfabrik, the first film in 25 years to be completely funded by the legendary Babelsberg film studios in Berlin, opened Manchester Film Festival at the weekend. Marie sat down with the filmmakers to find out what it was like to make a film in the original German dream factory.

Executive Producer Sebastian Fruner and Director Martin Schreier are enjoying a cocktail in the bar when I find them. They’d just arrived in Manchester to open the Manchester Film Festival with the UK premiere of their film Traumfabrik (Dreamfactory).

I’m surprised (and delighted) that a film in a language other than English has been chosen to open proceedings, and ask them how they feel.

“It’s a special honour for us” says Martin Schreier. “To be the one who starts everything off – we’re really happy. That’s why we came. Everyone said don’t go because of coronavirus and we said no, we’re the opening film and so we have to be here because it’s such an honour to open a festival. Maybe if we die, then we die for something great!”

The idea for the film first came about around three years ago in collaboration with producer Tom Zickler who died in September last year. Zickler was a great friend and collaborator of both Schreier and Fruner, and their joy at taking the film around the world is clearly tinged with the sadness of his loss, as they refer to his influence on several occasions during our chat.

Schreier starts. “Tom had founded a new production company at Studio Babelsberg (the oldest film studio in the world) and he said ‘we have to make a film about the studio – what ideas do you have?’ And because I’m a guy who has had so many broken hearts in my life I said ‘I want to make a love story’. And so we came up with the idea about an extra in a film studio who falls in love with who he thinks is a film star, and it went from there.”

Sebastian Fruner takes over the story. “In around November 2016 we took a trip north of Berlin and I rented us a house where we sat down, swapped stories about life working in the movies, and pretty quickly we decided what we wanted to do; the studio loved what we envisioned and so it was an easy ride to make the film. Lots of real life stories found their way into the film. Some people didn’t believe us, but lots of the scenes have a kernel of truth in them. Making a film is not easy but the process was pretty quick with our film because everyone believed in the story.”

Most of the film actually takes place at Studio Babelsberg itself – so what was it like to walk onto set and realise that you’re actually working and shooting at Babelsberg?

“It was so amazing!” Schreier exclaims. “I remember one night after we’d finished shooting for the day. Everyone else was partying outside and I walked through the studio alone; it was the studio where Fritz Lang shot Metropolis and I felt like every ghost who ever shot there went through me and it was just magic!”

Fruner joins in the glee: “And our production office, Martin’s office, was the office that Steven Spielberg used when he was making Bridge of Spies! …”

“… yeah, and I’m the biggest Steven Spielberg fan and I could almost feel the chair still warm from where he sat! …”

“… it’s like a playground, it gives you more power than ever knowing what happened here …”

“… and in one studio, Quentin Tarantino shot Inglorious Basterds there and there is still blood on the wall and they have kept it there deliberately … and because we love making movies, we’re like kids in the candy store. If you’re there where your heroes were it’s an empowering feeling.”

As someone who lived in a divided Germany, albeit in the 80s not the 60s, I was curious to know whether the film was received differently by German film goers as opposed to global audiences?

Fruner admits “We were criticised in Germany because the end song was sung in English even though the singer (Helene Fischer) usually sings in German. And we said no, this film is for everyone because it’s about love. Some critics said we should have told the story more politically but that was never our goal. It’s a love story, it’s set against the backdrop of the wall but it’s not meant to be political.”

Schreier adds “It’s a fairy tale that the grandfather tells his young grandson. And I was so shocked [that people said they should have stuck to the politics] but it’s a film about love and nothing else. The Berlin Wall has the function of showing us that love is bigger than every obstacle, that if you really love someone, if you try and if you fight, then you can get there.”

“And also it was at the time of the 30th anniversary of the wall coming down” Fruner chimes in “and there were a lot of films coming out in Germany which were about the wall and which were about the politics and we wanted to do something different. One of the biggest criticisms was that the GDR was too colourful. A German critic said ‘If this film was shot by a foreigner, if it was an American movie, if Wes Anderson had told this story, then everyone would cheer’. But if you tell this story as a German, then they say ‘you can’t tell a love story using this, you’re not treating our history right.’”

“Tom [Zickler] said that during the 1960s Studio Babelsberg was an island for creativity and it wascolourful and there werecrazy people there. And so we wanted to show that things might have been grey around it, but not the island of Babelsberg” adds Schreier. “Tom said ‘They will hate us for this film’ and I said ‘We don’t give a damn, let’s go full on!’ Put away your political agenda and just take the film as what it wants to be, just let yourself fall into it.

“I’ll let you in to a secret. The story about the wall came later. The first inspiration was to have the story set in the 60s when movie making was really hard – you had heavy cameras, you didn’t have green screen, everything was hand-made. Then one day we realised that the wall appeared in the 1960s and we could use it in the story … but the love for the films in this era came first.”

I asked about the big musical scene towards the end of the film, which clearly shows the filmmakers’ love for classic movies.

“The Greatest Showman had just come out which inspired us” says Fruner, “but I have to say a scene like that comes straight out of Martin’s heart; the way he captures and conveys emotions – it’s his signature, his handwriting.”

The pair have put their next collaboration on hold for a short while due to the passing of Zickler, but both agreed fondly that he would have been proud that Traumfabrik was achieving recognition on a global stage. And it’s a fitting tribute to them all that this beautifully filmed ode to cinema is getting its moment.