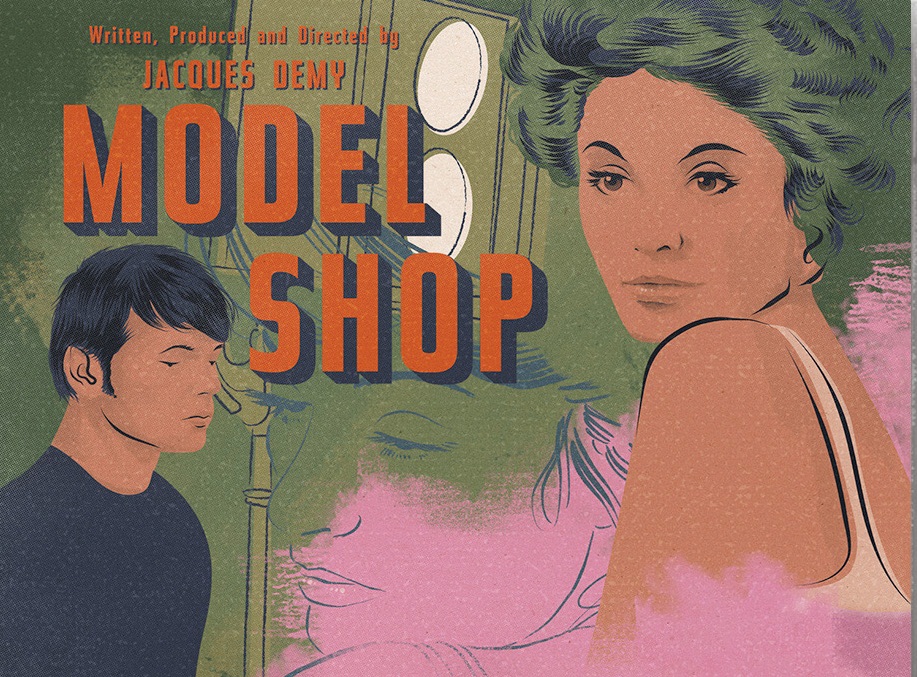 If you’re looking for underseen and overlooked gems, then this sole English language film from French auteur Jacques Demy should more than fit the bill.

Written, produced and directed by Jacques Demy, Model Shop is at once unique, and an entwined part of the Demy-verse.

Demy had already made four feature films and a number of shorts in France before he and Agnes Varda headed off to Hollywood in 1968 to take up a lucrative offer made by Columbia. The result was Model Shop, Demy’s one and only feature in the English language, released in 1969. But although (or perhaps because) Columbia allowed Demy to have complete autonomy over the work, including final cut, the film did not garner box office success and Demy returned to France to continue his filmmaking on home soil. But half a century down the line, it’s time that this film was seen by more people and thanks to Arrow Academy that’s now possible.

We’re introduced to George (Gary Lockwood), a young man who seems without purpose, even though he has opportunities to succeed. He’s recently left his job as an architect, not wanting to put the effort in on mundane projects in order to earn the opportunity to create grander things later on. His relationship with his live-in girlfriend is rocky, his car is about to be repossessed, and it is only a matter of time before his draft papers arrive in the mail box. Life is not turning out how he would have wanted.

On one of his drives around Los Angeles George becomes intrigued by Lola (Anouk Aimée), a French woman scraping a living as an erotic photography model. The two are each in search of happiness and resolution in their own way, and they spend time together discussing their lives, broken relationships and philosophy. Lola’s unhappiness comes from separation from her family, and her story is a continuation of her character in Demy’s 1961 film Lola – the director has made it clear that his early films all take place in the same universe, and there are links and references aplenty for those in the know.

Dissatisfaction and disillusion runs through every scene, whether it’s Lola, George, or his friends’ attempts to keep their newspaper going or write that next song. Creativity is stifled, and yet the ennui of California youth waiting to be drafted can’t find a way to rise above the mundanity of daily life.

With the exception of one soaring scene looking down on the city from the West Hollywood Hills, Demy puts the audience right with George in his vintage car, driving up and down Sunset Strip in pursuit of … well, George is still figuring that out, but the sense of location and feeling of Los Angeles at the end of the 1960s are both extremely strong. Being physically in the car with George and just driving around with him gives an insider’s view of the city. It’s not glamorous, it’s just where he lives. The billboards advertising flights abroad and the constant sound of aircraft overhead are constant reminders that everyone feels trapped, but no-one seems to be going anywhere.

Although Gary Lockwood wasn’t Demy’s first choice for the role, he hits just the right amount of disenchantment without being pretentious, and when the real threat of his own mortality actually hits him, he is able to convey his fear without becoming overwrought. I found it a strong yet understated performance, indicating the faintest trace of hope that all would be right in the end.

Model Shop completely pulled me in to its world, and I really hope that this restoration will allow more people to appreciate it this time around.

Model Shop is available on Blu-ray from Arrow Academy now