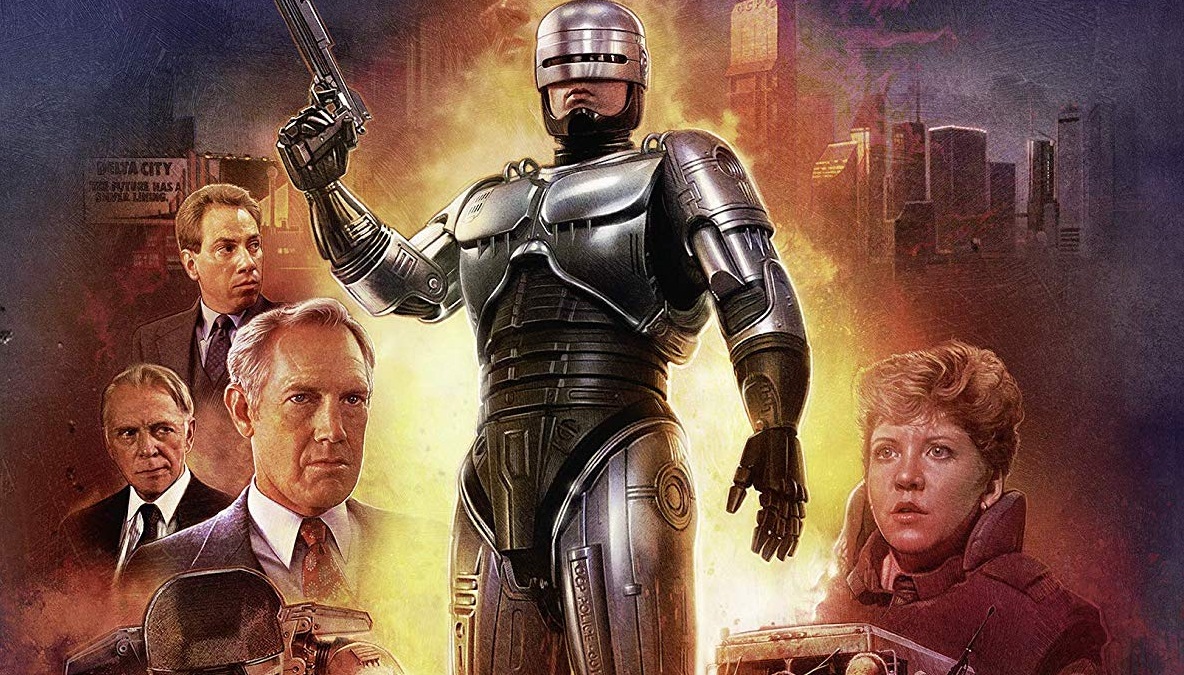 Arrow Video gives one of the great films of the 1980s the deluxe treatment; Robocop.  Armed with Three Different Versions and a wealth of extras this is one of the best Blu-Rays of 2019.

There is no denying that Paul Verhoeven’s seminal work; Robocop. The film stands as the very definition of 80’s excess.  It also stands as a testament to the nervy provocateur that Verhoeven has always been; taking a studio’s money and making an Anti-Fascist, Anti-Corporate Action Film.

In the near future, Detroit is a rundown shell of its former self (well, the Detroit of the 1980s future).  OCP is waiting to strangle the last bits of life so that it can begin breaking ground on Delta City, the new improved Corporate version of Detroit.  OCP has plans on automating the Police Force.  Alex Murphy (Peter Weller) is their first unlucky test subject becoming ROBOCOP after being brutally murdered by Clarence Boddicker (Kurtwood Smith) and his gang. The experiment does not go well as ROBOCOP is more Murphy and ROBO, pushing his own agenda of revenge and not the Corporate Cleanup that OCP wants of its “Property”.  ROBOCOP soon finds out there is more to his tasks than simple revenge.

Make no mistake, the only reason that Robocop works as well as it does is the amazing direction done by Paul Verhoeven.  This being one of the best films of the 1980s is not a glib statement.  Robocop in Verhoeven’s hands takes down just about everything that made the 1980s known as “the 80s”.  Regan, Reganomics, Fascist Police States, Dirty Harry, Drugs, Corporate deregulation, Coporatatizaiton of Military and Police forces, Advertising, Short Attention Spans, TV News, City Bankruptcies, Cocaine, Greed all of it is taken down mercilessly by Verhoeven and screenwriter Ed Neumeier. All done in the in-your-face confrontation style that Verhoeven brings to all his work, and … it works.  It works better than in any other film he’s directed.

The reason the film works so well as a satire is that everyone, cast, and crew alike, understand that first and foremost the film must stand on its own as what it is; a cop revenge film.  Everything else is secondary.  Verhoeven may play lounge-in-cheek with the Ads and New Report interstitials. The main storyline with Murphy/Robocop’s hunt for his killers and the truth of who he is played with the somber tone of the Christ-metaphor that the director imbued the film with.

Robocop thirty-plus-years later is still a piece of badass satiric action cinema but has become a classic along the way.  There’s no denying that Robocop still leaves all competition in the dust.  I’ll still buy that for a dollar.

After some research, I see there appears to be some controversy over this 4K transfer.  I don’t see any major issues here.  Robocop has never looked better than it does in this Blu-Ray edition.  The work that Arrow has done to produce a new 4K transfer from the original 2013 master that was done by Verhoeven is great.  Yes, the unrated footage is not in the best shape, but it’s never been since the CAV Laserdisc days (yes, one of the first LD’s I owned was Criterion’s CAV LD edition of the film).  It looks better but people complaining about the mastering of it should really calm down and realize that the footage is the footage.  That out of the way this is a spectacular restoration giving Robocop a much-needed boost in image detail, sharpness, contrast and most importantly Grain structure.  It’s not that the grain structure is bumped up a level, rather it’s been refined here to the point Yost Vocano’s steely photography looks like a beautiful 35mm print.  Bravo to the fine folks at Arrow their work here should be commended.

The Audio Commentary Verhoeven, producer Jon Davison, and co-writer Ed Neumeier is unfortunately not the one from the Criterion Collection but is still the same participants and features most of the talking points.  This one from the 2001 DVD special edition has been reedited for the director’s cut.

The new Audio Commentary by Paul Sammon is great.  A marketing exec at Orion at the time, Sammon gives a great detailed account of the making of the film via the commentary.  Sammon discusses everything from Casting (the various people that were up for roles, to people they chased, to stories of how people came involved), the production (how little money they had, challenges with the suit, and more), and the editing and release of the film.

The other new Audio Commentary is a “fan commentary” of sorts by Christopher Griffiths, Gary Smart, and Eastwood Allen.  The creatiors of RoboDoc: The Creation of Robocop gives us a commentary that doesn’t cover any of the ground that the previous two commentaries do.  Griffiths, Smart, and Allen are all in fine form here giving us both details about the production, critical viewpoints, but being funny and entertaining as possible in the process.

The future of Law Enforcement: Creating Robocop is an all-new 17-minute interview with co-writer Michael Miner. Beginning with his origins starting at UCLA Film School and his meeting co-writer Ed Niemeyer and how they created the idea that would later become Robocop. Miner does a great job of giving us a break down of who developed what in the screenplay, how much he and Neumeier developed visually the look of Robocop, and why he thinks thirty-plus-years later the film endures.

Robotalk is an all-new 32-minute roundtable discussion with co-writer Ed Neumeier, writer David Birke, and cinematographer Nicholas McCarthy. Birke and McCarthy do a great job of pulling out some great details from Neumeier like his time sneaking on the Bladerunner set inspired in part Robocop, how Neumeier feels that the film is as much about coping as it is about fascism, Birke gives some great details on Verhoeven’s scrapped Jesus project, how different Robocop is very different than other 80s hyper-violent action films, his original reactions to the rough cut of the film, and much more.

Truth of Character with Nancy Allen is an all-new 18-minute interview with actress. The actress is delightfully engaged talking about the film. Beginning with how she got the script, her reactions to the script, meeting Verhoeven and his on-set energy, auditioning for the part, how she didn’t get the part initially, the actual production, the infamous haircut, and much more.

Casting Old Detroit with Julie Selzer is an all-new 8-minute interview with the casting director. It’s great to see Arrow interviewing one of the most important but undersung crew member of any film; the casting director. Selzer is a great interview as she really dives into what she does as a casting director and how she approached casting of not only Robocop but all the various parts. The most interesting aspect is the requirements for the part of Alex Murphy/Robocop. She does breakdown how they cast most of the main parts. There are a lot of great behind-the-scenes photos included in the interview.

Analog with Peter Kuran and Kevin Kutchaver is an all-new 13-minute with the video effects producers. Kuran and Kutchaver begin with their origins, going to school in California, becoming friends, and eventually being hired at ILM, working on Star Wars, eventually forming their own company, the work they did on Robocop and how it was done, and so much more. The interview does include a lot of great childhood 8mm SFX footage and behind the scenes photos.

More Man than Machine: Composing Robocop is an all-new 12-minute tribute to composer Basil Poledouris. The late composer gets his work in Robocop praised by Music Composer critics Jeff Bond, Lukas Kendell, Daniel Schweiger, and Robert Townson. Discussing his association with Verhoeven and John Millius, what composers’ strengths as a musician, and how the score works with the film and just how complex the music is.

RoboProps is an all-new tour with “super-fan” Julien Dumont of all his props and memorabilia from Robocop. Starting with how he procured all of the ephemera from the film. Narrating over images of his collection we see just how vast the collection is and some of the more famous pieces he has. As an FX Shope owner he is able to preserve some of the pieces that are degrading. It’s a fascinating close up look at the props and how detailed the proper and costuming was. Included are some great photos of Rob Bottin creating the clay sculpt of Robocop.

Robocop: Creating a Legend is a 21-minute archival featurette discussing the creating of the suit. With comments by Peter Weller, Jon Davison, Paul Verhoeven, Ed Neumeier, Kurtwood Smith, Ray Wise, and Miguel Ferrer. All contribute along with the behind the scenes photos give an oral history of how the iconic suit was created. The most important subject, Rob Bottin does not show up, unfortunately.

Villains of Old Detroit is a 17-minute archival featurette about the villains of the film. With comments by Verhoeven, Ronny Cox, Kurtwood Smith, Ray Wise, Miguel Ferrer, and Ed Neumeier. Beginning with a discussion of the modified .50 rifle the gang uses this is a great look at the behind the scene look at the villains and making of their scenes together. Great tidbits include the guys stealing golf carts and racing around, designing and developing the villains, and much more.

Special Effects: Then & Now is an 18-minute Featurette about the special effects and stop motion effects work with comments by Verhoeven, Phil Tippett, Rocco Gioffre, Craig Hayes, and William Samdell. This is a great featurette looking at the before and after of the effects. Matte painting, stop motion, and other effects work are discussed and also shown in detail. Anyone with a love of old school photochemical effects work will want to check this one out as they show lots of pre-effects shots and rough work. It’s great.

Paul Verhoeven Easter egg is a brief interview bit where the director discusses his cameo appearance in the film.

There are 5 Deleted Scenes. All of them from the Media Breaks. All are justifiably deleted.

The Boardroom: Storyboard with Phil Tippett Commentary is a 6-minute featurette of the Miniature FX Supervisor discussing the actual work that went into creating the scenes.

Director’s Cut Production Footage is an 11-minute Featurette of b-roll footage from all of the footage from the film that was eventually cut from the film. This is a Robocop lover’s dream being able to see raw footage and how it was created on set.

Audio commentary is the same on disc one, just edited slightly differently.

Isolated Scores are the real treat here in audio options. The theatrical mix of the score and the original score are included.  Both are different experiences with the Original Score is the way to go as it gives you a more verbose listening experience a more fully fleshed out score.  One thing is certain; listening to both the Theatrical Mix and the Original Score, there is definitely something lost once Sound Editing and Music editing get a hold of the film.

Edited-for-TV Version includes in a sub-menu;

Arrow Video has outdone themselves with their edition of Robocop.  HIGHEST POSSIBLE RECOMMENDATIONS!!!!