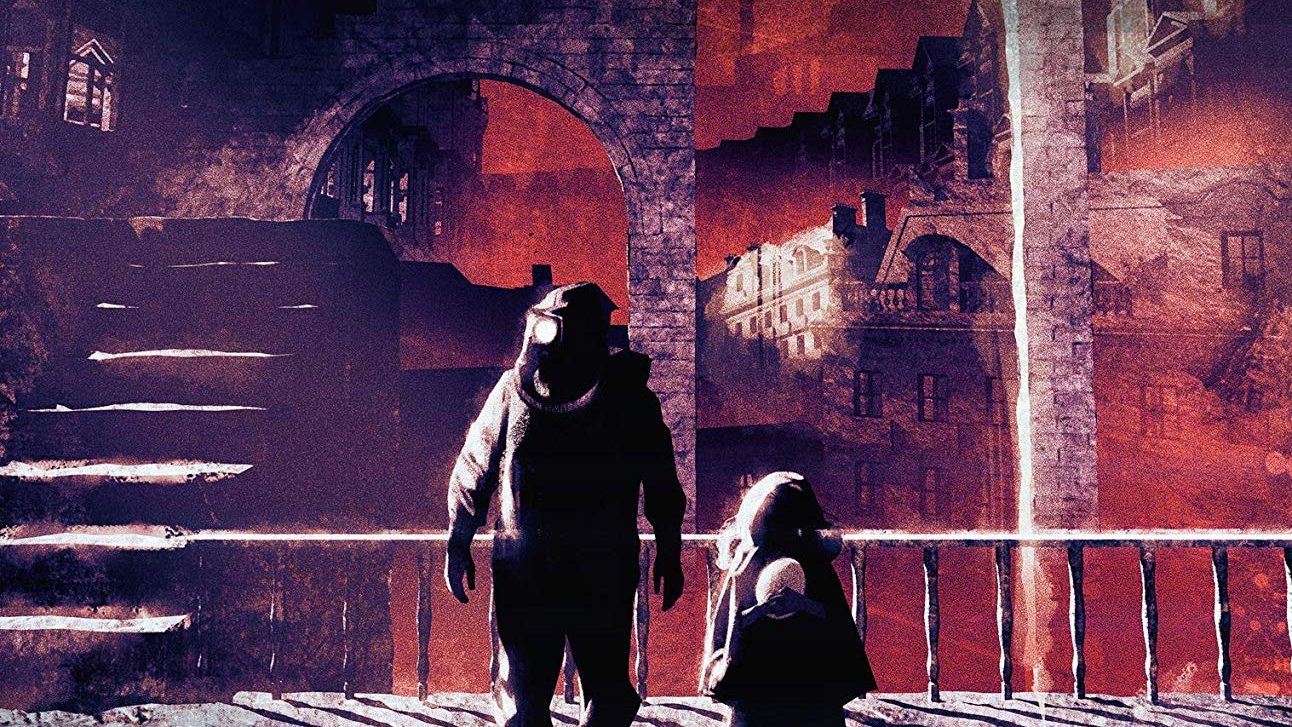 A cult oddity that mashes the early Anime work of the genius behind Akira with a low-budget New World Productions of the late 1980s, the result is something all-together different.  Arrow Video has released the film with a new 2K remaster and thoughtful extras.

Some films that have all the resources in the world cannot make any coherent or even “artistic” sense.  Some films have no resources and by some miracle of the “Film Gods” tell a coherent albeit purposely dense story.  The Post-Apocalyptic thriller In the Aftermath boldly uses footage from a long-forgotten Anime film with striking results.

Set after an undetermined cataclysmic event has ravaged the earth two men search the scared land for air filters and fresh air to survive.  In heaven, an Angel is sent to Earth in order to test one of these men to prove his worth and possibly save the planet.  Will the man who is given no instructions and little guidance be able to prove his worth?

Co-Writer/Director Carl Colpaert has the unimaginable task of taking an esoteric Anime in Angel’s Egg (who’s director Mamoru Oshii would later go onto to direct Akira) and turning it into something sellable for the burgeoning Direct-to-TV market.  How Colpaert went about this, at first glance, appears to be a crass cash-in (post-apocalyptic actioners were a dime a dozen at this time) but the results are much more meditative and dare one says brilliant.

By choosing to re-loop dialog and take specific imagery from Angel’s Egg, Colpaert created a parallel narrative with his live-action shoot.  His works in complement to the narrative he’s build form Angel’s Egg rather than one that’s shoehorned into his own narrative.  In the Aftermath either by intent or accident has themes that push the film beyond your run-of-the-mill Mad Max rip off.  Call it Mad Max Fury Road adjacent.

The Brand new 2K restoration from original film elements, exclusively restored by Arrow Films is a good solid transfer.  Having no reference to this film I cannot confirm the upgrade in quality. But I can say Arrow has given us a 2K remaster that looks beautiful retaining grain structure and clarity. The image is more filmic than artificially cleaned-up which allows the film’s striking cinematography shine.

The Path to Aftermath is a new 11-minute interview with producer Tom Dugan. Dugan discusses his USC Film School experience to his beginnings New World Pictures. The interesting origins of how The Project Came to be. The locations, the original anime, and how this all came together during the late 80s Low Budget Genre market. He even goes into a Welcome to Frog Town Story!!!

Apocalypse Then is a new 14-minute interview with Tony Markes. Beginning with his acting origins as a child actor moving to development to how he got involved with the project. Marked actually gives more details on how they used the Angel’s Egg anime and blending it with Live Action. Some of the great tidbits include the toxic waste dump location, how much improvisation on the set.

Before the Aftermath: The Influence of Angel’s Egg is a new 19-minute new video essay by writer Andrew Osmond. Osmosis discusses how the reshooting scenes and creating another film from an existing film is not new (referencing Godzilla, The Power Rangers, Battle of the Planets). He also discusses how New World even did this pretty often with Godzilla 1985, Warriors of the Wind (aka Nausicaa). Much of the discussion is about the creators/creatives behind Angel’s Egg and how many went onto heavily influential Anime work like Akira, Kiki’s Delivery Service, Ghost in the Shell and much more.

Rounding out the Special Features is a Still and Poster gallery. The gallery runs around 4-minutes and features approximately 35 stills and posters. A lot of the pictures seem publicity stills, but the posters also include a few VHS covers that have been scanned in. The gallery can be paused but unfortunately, there isn’t a navigation option.

In the Aftermath is a mix of Post-Apocalyptic Troupes and Spiritual Imagery mashed up into a blender with the Punk Rock ethos of New World Pictures.  The results are a Recommend but with a warning that only those that Love the Post-Apocalyptic genre and all its sub-genres, all others proceed with caution.

Arrow Video’s Blu-Ray of In the Aftermath is out September 16th!!!