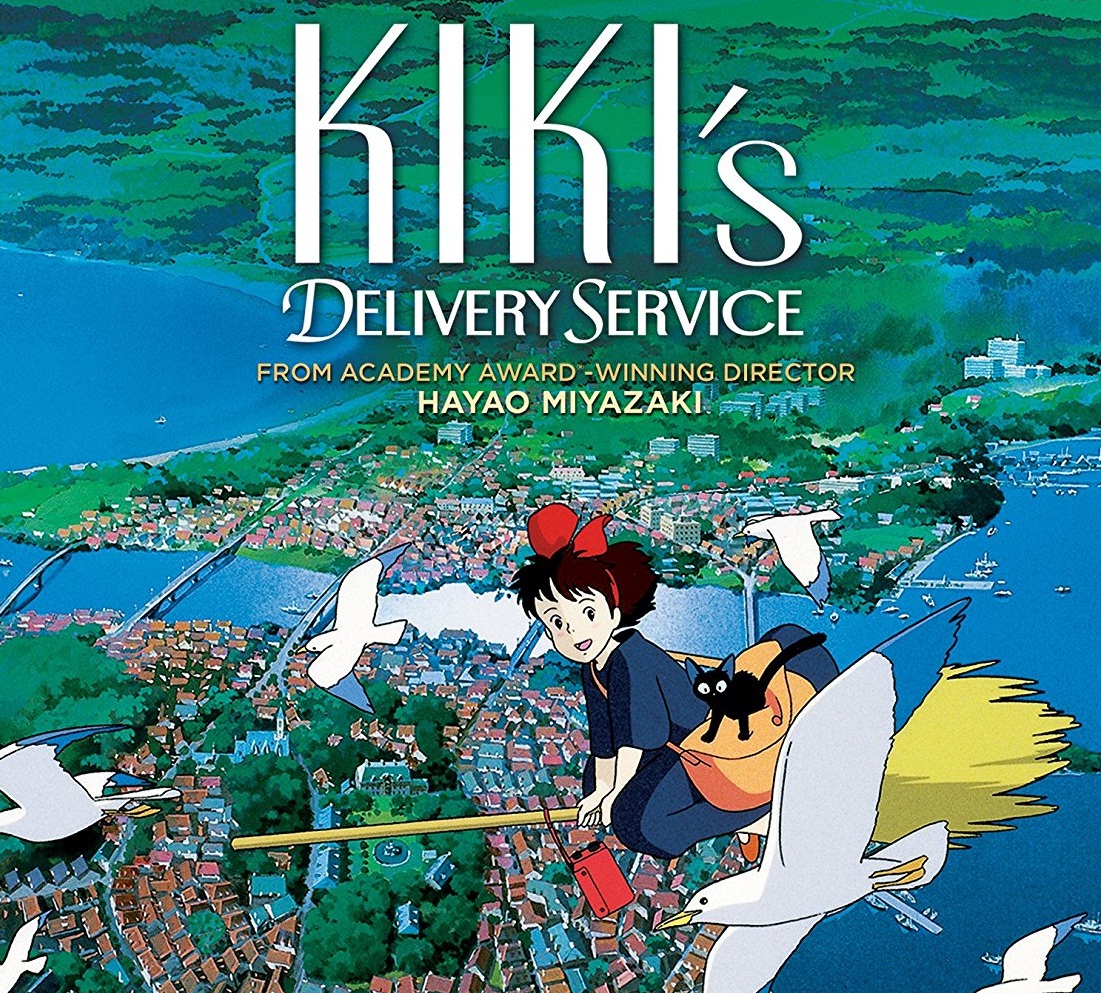 Studio Ghibli followed up My Neighbor Totoro with another story of a young woman, this one of one finding her way in the world.  Hayao Miyazaki’s Kiki’s Delivery Service can be taken at face value; the charming and whimsical adventures of Kiki a Witch and Jiji her sarcastic talking cat. Taken from that vantage point the film is breezy enjoyable time.  Taken from another point of view the film is a universal story of female empowerment and finding your place in the world.

What the film does wonderfully is allows Kiki to never rely on a man.  Everything that our heroine does is without the aid of a male or male authority figure.  When help and guidance are given it’s from other women.  Onsono, the pregnant bakery owner who helps Kiki but by no means gives her a free ride.  Ursula the free-spirited painter that gives Kiki guidance when she needs it most.  These women don’t ever tell Kiki’s her place but rather share their experience and truly mentor her letting her find her way.

In a way, the film hilariously critiques men though may not be immediately apparent.  The men in the film are doofuses, inarticulate lovesick boys, or accusatory and inflammatory authority figures.  The movie never pushes this critique or viewpoint in a forceful way. The storytelling in the film is far too elegant for something of that nature.  Rather the story presents most of the challenges Kiki faces that are artificial or “manmade” are made by men.

Kiki arrives in town flying through the cobblestone streets to the wonderment and joy of many.  It’s a mustached police officer who instantly begins to admonish her and write a ticket.  It’s the Baker’s husband that looks on Kiki with suspicious eyes. Only after the Baker welcomes her in is her husband revealed to be a dope. It’s the anxiety and needs to please a boy, one she isn’t sure she even likes, that causes a chain of events that leads her to not be able to use her powers.  It’s only once Kiki realizes why she is doing what she’s doing, for herself and no one else, that she is able to regain her powers.

These never amount to something as crass as plot machinations or some sort of antagonist.  Kiki’s Delivery Service excels in challenges that face our young protagonist but never in the conventional of ways. Kiki isn’t a superhero but a normal girl with wants and dreams. She is resourceful, smart, caring, intelligent and strong.  These traits never feel like their forced upon her.  We discover these things about Kiki through the movie.  When challenges arise we do not worry about who’s going to save Kiki, but we relish in how is she going to solve the issue for herself.

Conventions are not only challenged in Kiki’s Delivery Service but they’re broken down.  That breakdown doesn’t come at the expense of Kiki’s role as a female protagonist.  Never is she suddenly added some sort of masculine ideal of what a hero should be.  The most powerful image comes late into the film with Kiki having to summon her power to save someone.  As attempts to do so the imagery is so powerful and simple; a girl attempting to save someone from great peril.  This image is as striking as the moment in Donner’s Superman (1978) when Superman saves Lois falling from a helicopter.  The image made all the more powerful because Kiki is not a super boy or a super girl, only a girl.  That visual and allowing Kiki to be a girl who saves a boy is the most striking and powerful.

That’s the greatest gift of Kiki’s Delivery Service; a fully formed heroine. A heroine whose femininity isn’t sacrificed in service of making her that stereotypical “hero”.  She is a hero because of her altruism.  Not because of or in spite of the fact that she’s the toughest or has physical strength, the ideals that men glom onto heroism.  Kiki’s Delivery Service shows children that heroism isn’t tied to those masculine ideals but is something more.

GKids/Shout Factory has received a brand new remaster from Studio Ghibli or has tweaked the masters that Disney was provided for their Blu-Rays.  This transfer on Kiki’s Delivery Service is only slightly superior to the Disney one.  Everything looks a bit cleaner and clearer, especially during the flight scenes.  The transfer is simply gorgeous showing off the detailed backgrounds inspired by Prague. Bravo to GKids for the care and time that went into these transfers.

Everything was basically ported over from the Disney versions with the exception of the John Lasseter based interviews.

Fledging animators take note that the entirety of the film has been presented in Story Board format.  Further making this special, these are Miyazaki’s own hand-drawn storyboards.  I watched the film a second time with this feature enabled toggling back and forth between the completed film and storyboards.  It presents a fascinating portrait of the animation process and the differences in the frame from the moment that Miyazaki draws it to its completed form.

Both the US and Japanese Trailers are included.

I mention the 8-page booklet as it’s a beautiful introduction by Miyazaki himself.