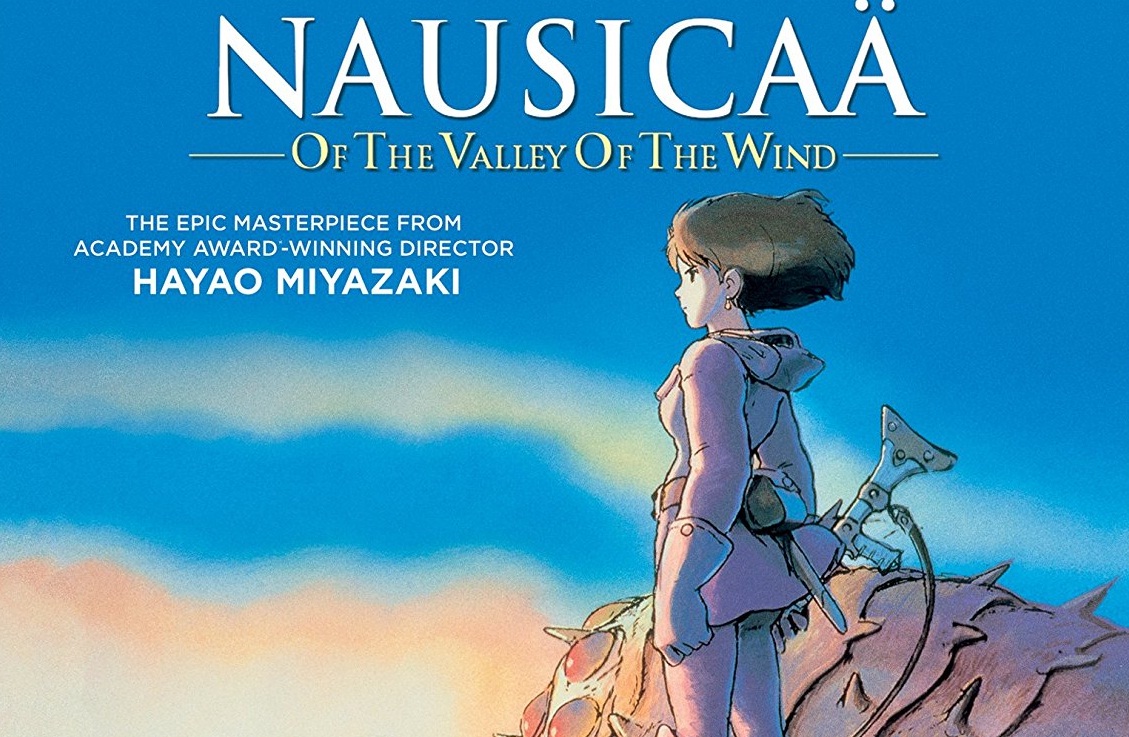 Welcome to our continuing series Ghibli Rocks.  Each article looking at the work of Hayao Miyazaki and Studio Ghibli as a whole.  Next up is the early entry into Hayao Miyazaki’s filmography Nausicaä of the Valley of the Wind recently released by GKIDS/Shout Factory on Blu-Ray.

Yes, technically Lupin the III: The Castle of Cagliostro is Miyazaki’s first film.  It is not his first Studio Ghibli Feature.  Which is a huge distinction between the two films.  The Castle of Cagliostro, is a solid action film that’s hindered by the budget, and speed of the production.  Nausicaä of the Valley of the Wind had almost triple the time, double the budget and Miyazaki working from his own story (which was based off his Manga series of the same name, and at the time was still on-going).  The results of these factors produced the first true Miyazaki film.

Like any first feature from a world renowned filmmaker Nausicaä of the Valley of the Wind is in some ways the perfect distillation of Miyazaki’s work.  In other ways the film represents things that are uniquely its own that Miyazaki would never come back to.  Much like any great filmmaker Miyazaki seems to be drawn to specific themes, characters, settings.  Though they have evolved and been refined, those core ideas remain what the director has come back to.

Set a thousand years after the “Seven Days of Fire” we find humans are still dealing with the ramifications of that apocalypse.  An apocalypse that we learn was Mother Nature’s reaction to Humanity’s manifest destiny.  The film tells the story of Nausicaä, a young independent woman, and her village as they are besieged by not only giant drone like insects, the Ohm, but one of the other remaining humans tribe, the Tolmekian.  The Tolmekian would not only destroy the Ohm but occupy Nausicaä’s home, the Valley of the Wind, by any means necessary.

Mother Nature versus Humanity has been a theme that runs in all of Miyazaki’s work.  Here it feels the purest and most direct.  Miyazaki’s arguments, distrust and distaste for Humanity run like a river through our central character, Nausicaä.  Our young heroine is in fact not just a cipher for Miyazaki, she is Miyazaki.  One need only watch the shy and quiet director in interviews discussing this topic of Mother Nature vs. Humanity to see those characteristics inherent in both the director and character.

Few, if any, Miyazaki’s film are as one sided as Nausicaä of the Valley of the Wind is with its character’s motivations.  We root for Nausicaä and her fight for the Ohm’s survival.  We never question (unlike in Miyazaki’s most mature work Princess Mononoke) motivations of the villians of the piece.  Even the word, “villain”, is never a word that one could describe any of the “antogonists” in Miyazaki’s work, except here and his next film.  There is some moral shading for Princess Kushana, the leader of Tolmekian, but one who is accustomed to the complexities that Miyazaki writes into his antogoists is not present here.  It’s fascinating to watch, if you have studied the director’s work, just how one note Kushana is; she hates Mother Nature and uses humanity’s plight as a stage for warmongering.  Something that continues, albeit only slightly, in Castle in the Sky.

Nausicaä of the Valley of the Wind finds Miyazaki’s fascination with Europe, nature, and spirited fierce heroines fully formed.  Even the director’s accomplished framing is refined.  One would not think this is the work of a filmmaker with only one film under his belt (Miyazaki ranks among the best composers of frames in cinematic history along with John Ford, Akira Kurosawa and Steven Spielberg).  The film’s design and direction are wonderfully timeless never belying that the film is well over thirty years old at this point.

The film still remains shockingly modern.  One would never think of this film as coming from a specific era of filmmaking.  Much of that is due to just how unique and classically formal Nausicaä of the Valley of the Wind is. Much of the film feels influenced by the work of John Ford, who himself was a strict formalist, not in content but in design.  Miyazaki understood, still does, that a film does not hinge on modern conventions or inventions.  Like Ford, Kurosawa and Spielberg, Miyazaki knows the power of a film is not just telling a good story but being able to tell that story with style.  Much of what separates Nausicaä of the Valley of the Wind from even the newest animated (and most live action) films is in that very fact; it stylishly tells a good story.

This disc appears to be the same transfer from the Disney Blu-Ray. This definitely isn’t an issue as the transfer is gorgeous.  The transfer is razor sharp without any grain present (which is what one wants from Animation).  Bravo to Shout Factory/GKIDS’ for continuing to get these transfers and encoding them perfectly.

GKIDS has actually created new content for this release having not gotten all the special features from the Disney Blu-Ray/DVD release.

Fledgling animators and live action directors take note that the entirety of the film has been presented in Story Board format.  Further making this special, these are Miyazaki’s own hand drawn storyboards.  But these are also Miyazaki’s hand drawn storyboards from the early 1980’s.  It’s a fascinating watch in seeing how the director composed shots and his shot selection (which as stated before is impeccable).  These storyboards give insight into how to actually build not just action set pieces but how one creates drama through composition.

The brand new Commentary (in Japanese with Subtitles) is a bit dry but detailed on the making-of the film and the history behind Nausicaä.  Well worthy of your time if you are willing to read the subtitles.

Also new is the 45 minute interview with Toshio Suzuki and Hideaki Anno (the creator of Neon Genesis Evangelion) is fascinating as its not just a history of Ghibli’s formation and the production of Nausicaä, but an unfiltered commentary on Anime and Mayazaki’s work.  Both Suzuki and Anno are critical of Mayazaki’s work, though they are contemporaries.  It’s interesting listen (the interview plays over black screen with subtitles) because they praise the director as much as they criticize him.

Behind the Microphone is the standard EPK style featurette talking to the American Voice talent (the likes of Alison Lohman and Edward James Olmos) waxing lovely about Miyazaki’s work.

Creating Nausicaä is a 12 minute interview with Mayazaki discussing how Studio Ghibli and Nausicaä came to be.

GKIDS has treated Nausicaä of the Valley of the Wind with the type of respect it deserves.  The Blu-Ray Edition adds some great new special features but loses other from the prior Disney discs.  HIGHEST POSSIBLE RECOMMENDATIONS

GKIDS’ Blu-Ray edition of  Nausicaä of the Valley of the Wind is out now.

1 comment on “Ghibli Rocks: Nausicaä of the Valley of the Wind”