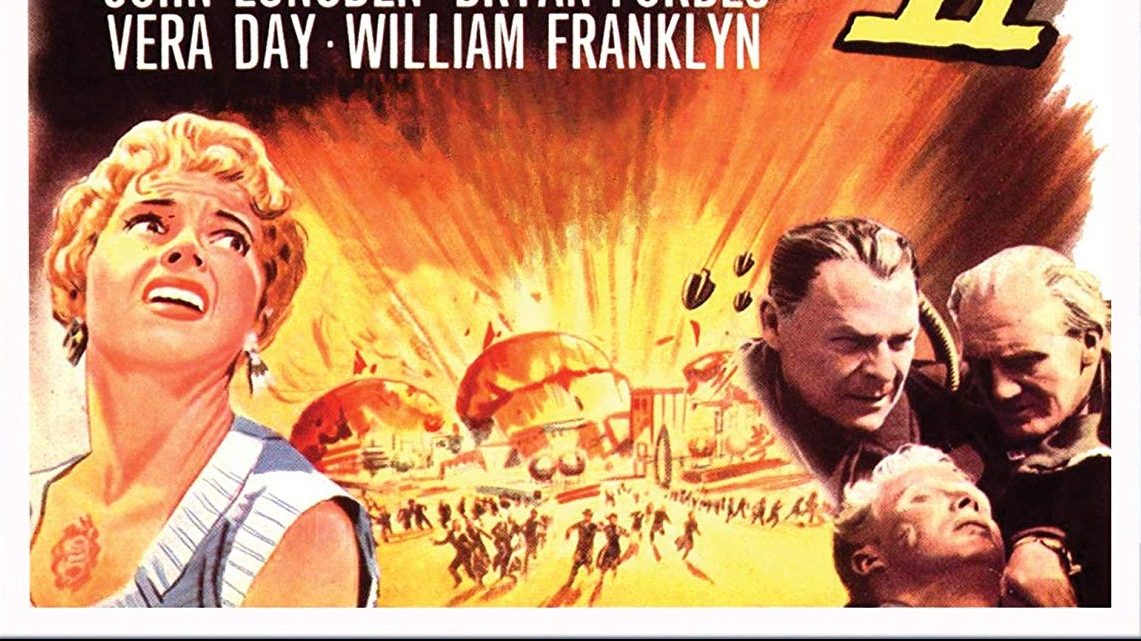 Quatermass II the lauded British Science Fiction film, a part of the Quatermass series, finally makes it to Blu-Ray loaded with extras from the fine folks at Scream Factory

In his day Professor Bernard Quatermass was the equivalent of Robert Langdon.  Instead of going on puzzle/mystery induced adventures, Quatermass seems to be perpetually trying to defend the British Public from Alien Invasions.  The sequel to The Quatermass Experiment, the legendary BBC series, has Quatermass facing off again an Alien Race that has designs on world domination and a head start on our intrepid professor.  No knowledge of the prior iteration to enjoy this well-written sequel.

After being rejected by the British Government over his plan to populate the moon, Professor Quatermass (Brian Donlevy) returns to his research facility.  Before he returns a run in with a couple and a strange accident has Quatermass begin an investigation of a strange rock.  The rock turns out to be much more sinister than just a meteorite.  Quatermass and his researcher may be too late as they have run into an Alien Infiltration to the highest levels of the British Government.  Arms with his wits, brain, and a few allies Quatermass faces this invasion with the sort of stiff upper lip heroism (American styling, as Donlevy was American) that you come to expect from Alec Guinness and the sort.

Screenwriter and creator of Professor Quatermass, Nigel Kneale creates a sequel to the original, which this reviewer has just seen, that remains within the “near-future” world that Quatermass lives that’s always understated in its technology.  But more so, Kneale and director Val Guest have created a similarly themed film that doesn’t feel like a complete retread of the first series/film.  Much of the work done here is more of a mystery thriller than one would guess for an Alien Invasion film.

Many will revel in just about every piece of pop culture about an Alien Invasion has taken liberties with plot points and the way that Quatermass II was told.  Much like John Carter before it, only really keen viewers, will look beyond and see that the film in its origin purity.  Undiluted from years of pop culture references, there is a seriousness that hardcore Sci-Fi fans will love with Professor Quatermass and his team trying to race against the impending invasion.

Quatermass II is a benchmark for Science Fiction not only in Britain but around the world.  The clever, intelligent narrative spun by Kneale is the kind of smart writing that would become a staple of British Novel, Television, and Film.

The new 2K Scan Of A Pristine Archival Film Print is gorgeous.  Be warned, the opening moments will have one worried as the transfer is almost illegible because of how dark it is.  No worry as after the first two minutes the print brightens (thus the transfer) and does so for the remainder of the film.  The transfer is as mentioned previously gorgeous with few if any blemishes.  The contrast levels which as mentioned before are an issue at the beginning but the rest of the film is a balanced image.  Bravo to Scream Factory/Hammer in finding this great print.

The second is from Author/Film Historian Steve Haberman and Filmmaker/Film Historian Constantine Nasr.  Nasr begins with humming the score of the original BBC mini-series and goes from there.  Haberman and Nasr recorded together look at the film from a historical, and critical standpoint.  Some will be familiar with Nasr from his commentary on The Leopard Man. Both men bounce off of one another when discussing this sequel.  Much of the information is done through a casual conversation between the two rather than a dry scholarly conversation.

The last is from Filmmaker/Film Historian Ted Newsom.  Newsom jumps into his solo commentary right into discussing the opening moments.  The Filmmaker is less scholarly and more of a conversationalist when it comes to his commentary.  That is not to say that he does not have the knowledge, but he really is entertaining.  The commentary does have an overlap of information from the first two commentaries.

A New 3–minute new interview with Special Effects Artist Brian Johnson.  Johnson (who won an Oscar for 1979’s Alien) discusses the film including a production anecdote about the director and peeping tom grips, and matte paintings among other stories in this short interview.

A New 2–minute interview with Assistant Director Hugh Harlow.  Harlow discusses how Quatermass II was the first film he worked and a few other anecdotes like the Shell Oil Refinery they worked at and a specific crew member having toupee issues in this very brief interview.

Val Guest – Quatermass and the Hammer Experience – is a 21-minute Vintage Interview with Director Val Guest.  The director discusses his beginnings as being hired for a comedy (one of three comedies they ever produced).  Working with Sellers on one of his Comedy, when Sellers was on TV.  Guest goes onto to explain how he came about to the Hammer Remake of the Quatermass series.  The interview includes behind-the-scenes photos and poster art throughout.

World Of Hammer – Sci-Fi, is a 26-minute episode of the BBC Produced TV Series.   Narrated by Oliver Reed this episode breaks down the Studios Science Fiction fare that includes the Quatermass films.  Like the previous one include on The Vengeance of She, it’s more clip show than documentary, fun time to be had by anyone who loves Hammer films.

Rounding out the special features are the US Trailer and a Still Gallery.  The still gallery runs around 3-minutes and consists of approximately 40 Behind-the-Scenes photos, Lobby Cards, and Posters.

Quatermass II is sci-fi at its best.  Scream Factory has loaded this disc with some great features and commentaries.