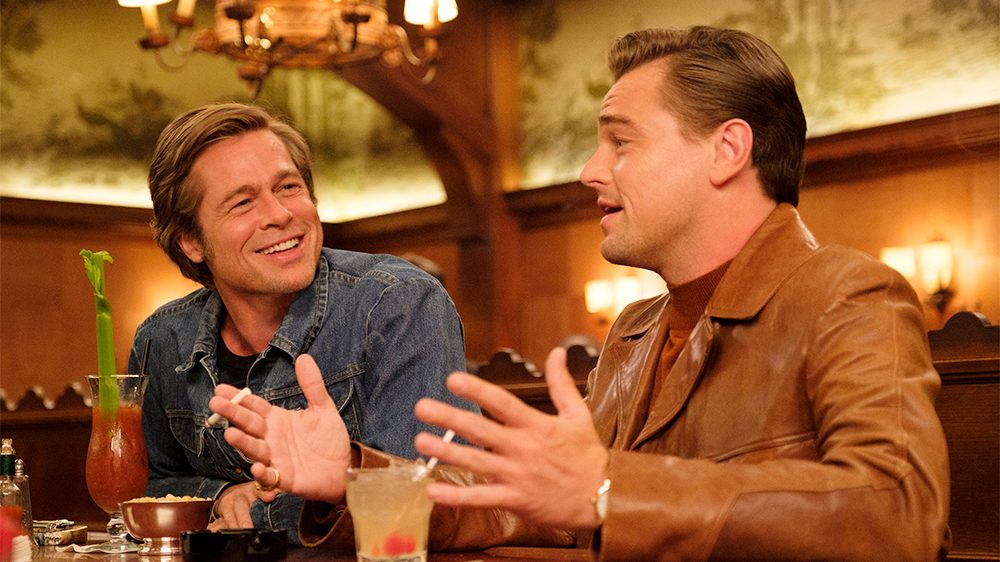 Once Upon a Time in Hollywood is Quentin Tarantino’s Ninth and possibly last Film. Adam dives into the unruly epic.

Editor’s Note: Currently, as to not ruin the film for other audiences, this is a SPOILER-FREE review.  At some point, there will be a spoiler-filled review of the film on this site to fully discuss the reviewer’s points.

Quentin Tarantino’s ninth film, Once Upon a Time in Hollywood, is unlike any of his other films and though somehow it is a Tarantino film to its very soul.  The unwieldy epic about the end of the 1960s is as funny, violent, and sentimental as the director has ever been.

Once Upon a Time, there was an aged out Television Star, Rick Dalton (Leonardo DiCaprio) in a crisis of faith.  Not the kind of faith that you or I know.  This is the church of Stardom.  The kind when actors are taken out to pasture left to rot playing Bad Guys Guest Spots on 60’s One Word Television shows like Lancer, Mannix, and FBI. Dalton’s only compatriot on this journey down the rung from A-List to Z-List Nowhere-dom is his ever-faithful (and much more capable) Stuntman, Friend, and “Guy” Cliff (Brad Pitt).  Though to say Rick won’t go down with a fight is an understatement.  Rick, with Cliff in tow, attempts to claw his way back all the while swirling in the ephemera of 1969 with the likes of Bruce Lee, Sharon Tate, and others.

As good a time one will have with Once Upon a Time in Hollywood, there is a nagging feeling of something being “left on editing the floor”.  The tight Novelistic approach that Tarantino has taken in all his films is only partially here.  The compact and concise plotting has gone, making one think that Once Upon a Time in Hollywood may have been cut for runtime by the director (who has final cut).  The film feels like an abbreviated version of itself.  Like a Three and Half hour epic cut by an hour.  The construction is still good, just not as lived in as one would like in sections.

Warning fair viewer, Once Upon a Time in Hollywood, is possibly one of the more disturbingly violent affairs in Tarantino’s filmography.  There are moments of extreme violence that has been the director’s trademark but not as excessive as it is here.  Many may be lulled in by bright shiny funny trailers, heed this warning that Tarantino has lost none of his bite.  In fact, many will view this and the sections where the violence does occur as blood-soaked as the heights of The Hateful Eight.

Ultimately, Tarantino’s ninth film feels like more of a pastiche of a bygone era rather than a true summation on that era.  A memory of a dream and nightmare not fully fleshed out.  One can hope that Tarantino finds another avenue/media (He recently created a truly different extended version of The Hateful Eight for Netflix) to make a more verbose fully realized version of Once Upon a Time in Hollywood, without running time constraints.  As it stands now, the film is a fascinating and at times funny, albeit disturbingly violent mess.  Though, it is a funny disturbingly violent mess that this reviewer intends to see more than a few times.

Once Upon a Time in Hollywood is in theaters July 26th