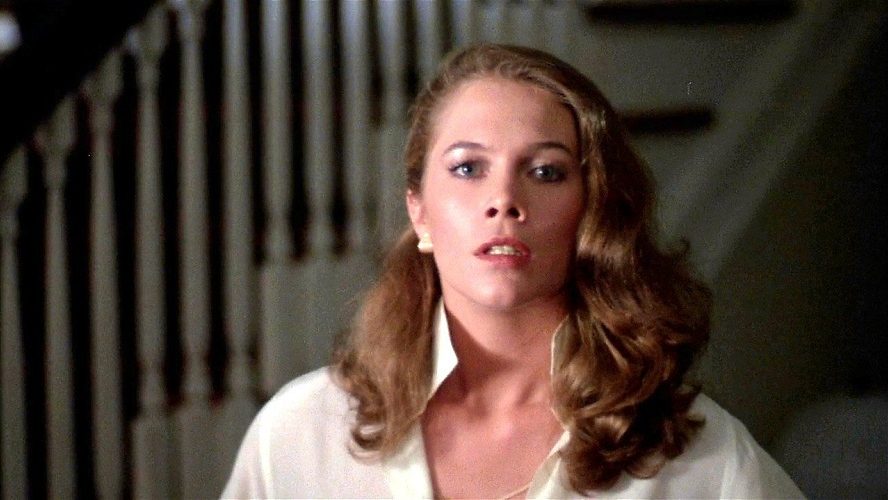 The Second Volume of Her Story continues with a look at Actor Kathleen Turner. Kristen looks at the film that made Turner a star and one that showed she was a untapped Comedic Force.

Kathleen Turner is one of the more unique actresses to be labeled “difficult,” and yet if you read interviews with her she generally talks about the weird issues with her male co-stars. Like the time Burt Reynolds said he wouldn’t take second place “to a woman” when he and Turner starred together in 1988’s Switching Channels, or Nicholas Cage being allowed to act strange during 1986’s Peggy Sue Got Married. Turner more than understood that she wasn’t able to stand up to her male co-stars and never cared about burning bridges. That still hasn’t stopped popular culture from using and abusing her, making fun of her weight, joking about her being too mannish. Much of that appears to come from insecurity because watching Kathleen Turner in a film is like watching a lioness stalk her prey. She’s cool, confident, understands what she wants and dammit deserves it!

It’s amazing to think that Lawrence Kasdan’s Body Heat was Turner’s feature film debut as she shows all the assurance of an actress who’s been on film for years (her stage experience probably helped). This neo-noir sees Turner as Matty Walker, a woman of means living in Florida with her husband, Edmund (Richard Crenna). When she meets small-town lawyer Ned Racine (William Hurt) the two start a blistering affair that culminates in murder.

The comparisons to Billy Wilder’s Double Indemnity are many, but what separates Turner from being another take on Barbara Stanwyck’s femme fatale is her awareness. Not only is she incredibly forward, sexually, but she understands what men expect her to be. During a dinner scene with her, Ned, and her husband, Edmund believes that Matty won’t know what they’re discussing. To him, there are men’s spheres and women’s spheres. Matty coyly responds that she’s too dumb, sarcasm heavily implied. Her manipulations of those around her, whether it be Ned, Edmund, even her niece Heather, are all with the aim of getting herself financially, and thus independently, secure.

It’s worth pointing out that Matty’s name implies a more masculine personality. She isn’t just a woman, but a woman specifically flouting the conventions men have been exhibiting for centuries. And yet her physical looks, coupled with the movie’s noirish one-liners and atmosphere, place Turner’s performance strictly in the world of 1940s Hollywood. With her deep, husky voice comparisons abound to the likes of Lauren Bacall and the aforementioned Barbara Stanwyck.

Coming at the beginning of the 1980s Body Heat isn’t affected by the growing backlash that would consume second-wave feminism in cinema throughout the late ‘80s and into the ‘90s. Matty wins at the end, able to go off to a life of her own happiness with the money from her dead husband. In just ten years another movie would have had Matty punished for refusing to be a loving wife and mother, probably dying at the hands of a man who never truly loved her.

Up until 1988 Turner vacillated between being sex symbols and disaffected wives, all with an eye towards showing the multiple layers of femininity. The arrival of 1989’s War of the Roses marked a turning point for Turner, transitioning her from sex object to shrew, opening her up to the criticisms that have hampered her throughout her career. By the mid-’90s Turner was well past her ingenue phase, but that didn’t stop her from continuing to play characters who challenged the gender norms attributed to women.

John Waters’ 1994 black comedy Serial Mom follows Turner’s Beverly Sutphin, a seemingly all-American housewife who engages in homicide when people wrong her or her family. She’s also an avenging angel for the mores that the Reagan-era would come to revere. At one point she murders a woman, played by Patricia Hearst of all people, for wearing white after Labor Day. Waters wasn’t simply attacking the ‘80s return to “family values,” he was attacking what women had been taught to revere for generations. By casting Turner, an actress who was forced to change her persona when she was no longer perceived as sexually attractive, the actress was simultaneously able to channel that rage into the character.

By film and societal standards Beverly has done everything right: she has a home, a husband, and two seemingly well-adjusted children. Her only flaw is that she’s judge, jury and executioner for those who can’t rise to her impeccable standards, and that itself is satirical considering how Hollywood treats its actors. Beverly is both doing what people wish they could – killing people who litter, people who are mean – but Waters asks, “Why is this still not societally acceptable?” For Beverly, it is enough to be a woman that still leaves her open to persecution. But, like Matty, Beverly ends up winning in the end. She never goes to jail and is, in fact, turned into a celebrity. Her and Matty Walker would make great friends!