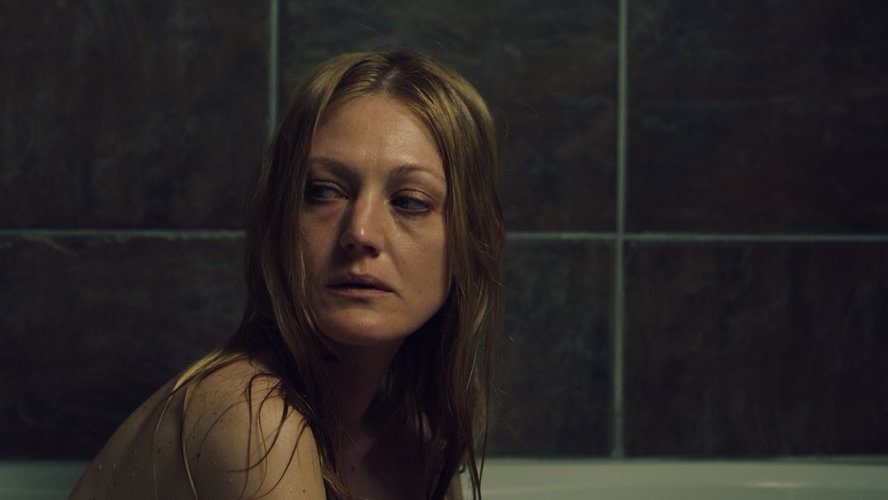 Fear and Loathing in Suburbia

Despite all my rage, I am still just a rat in a cage. Then someone will say what is lost can never be saved. (Bullet with Butterfly Wings, 1995)

It’s as if Billy Corgan and Smashing Pumpkins were writing a theme song for Holly, the wife and mother of two filled with suburban angst who’s the driving force behind writer/director Dean Kapsalis’ new film The Swerve. Holly, played with balls to the wall fearlessness by Azura Skye, teaches English at the local high school to kids who play on their cell phones or stare vacantly into space. Her husband is working late to secure a position in management at the local supermarket, but Holly suspects his late-night schedule may be more pleasure than business. Then to top things off, Holly has two teen-aged kids who treat her with either total disregard or complete disdain.

Throughout the film we see Holly traipsing to her bathroom medicine cabinet to ingest various pills. Is she fighting depression? Certainly seems like it. Is she being treated for more serious mental illness? We’re not sure, but Holly is definitely riding the ragged edge of burnout as she heads toward a possible mental breakdown. She has a recurring dream that she ran two men off a windy road as she headed home from a dinner party. But that was just a bad dream, right? Then the local newspaper reports that two men were killed in a single-car accident, and we begin to wonder if Holly is experiencing breaks with reality.

Portions of The Swerve reminded me of Cory Finley’s 2018 knockout Thoroughbreds. The films make excellent thematic bookends. If Thoroughbreds gives audiences a look at the ways in which suburban middle class existence can suffocate the youth of America, then The Swerve confirms that the adults may not be faring much better. Holly finds herself in a world where she’s expected to sacrifice herself for the greater good — her students, her children, her husband. And somewhere along the way, she’s forgotten who she is. She has ceased to matter. In a way, she has ceased to exist. Her dreams and her needs have evaporated, leaving a shell of a person in their wake.

In the first act of the film, Holly finds herself trying to outwit a mouse who has infiltrated her home. She baits traps with peanut butter laced with poison. She gets bitten on the finger during her mortal combat with the rodent. But, the audience understands this is more than a simple pest control issue. When the trapped creature fights back, we see Holly through a new lens. How much bite does Holly have in her petite soccer mom frame? What is she capable of if she’s pushed too far?

As with many dark films that are hard to pigeon-hole in a genre, The Swerve is being marketed as a horror film. I found it to be an excellent character drama that’s willing to go to some very unsettling places. Horror film? Not in the traditional sense. It’s horrifying in a real world way — like the headlines we see every day from online news outlets. The Swerve captures our current 21st century sense that the world has gone mad, and we may be a few of the only sane people who remain.

Like more straight-ahead horror fare, The Swerve makes good use of confusion. The audience is often left to wonder if Holly’s actions are real or imagined. Is she dreaming or is intoxication simply blurring her actions? As the narrative progresses, pieces snap into place. We are not left with some obtuse ending. When the credits roll, viewers know full well what happened to Holly, her husband and her kids. Perhaps when you know their individual fates, you’ll be able to decide if The Swerve is a horror movie. Genre labels aside, it’s a solid, thought-provoking film.