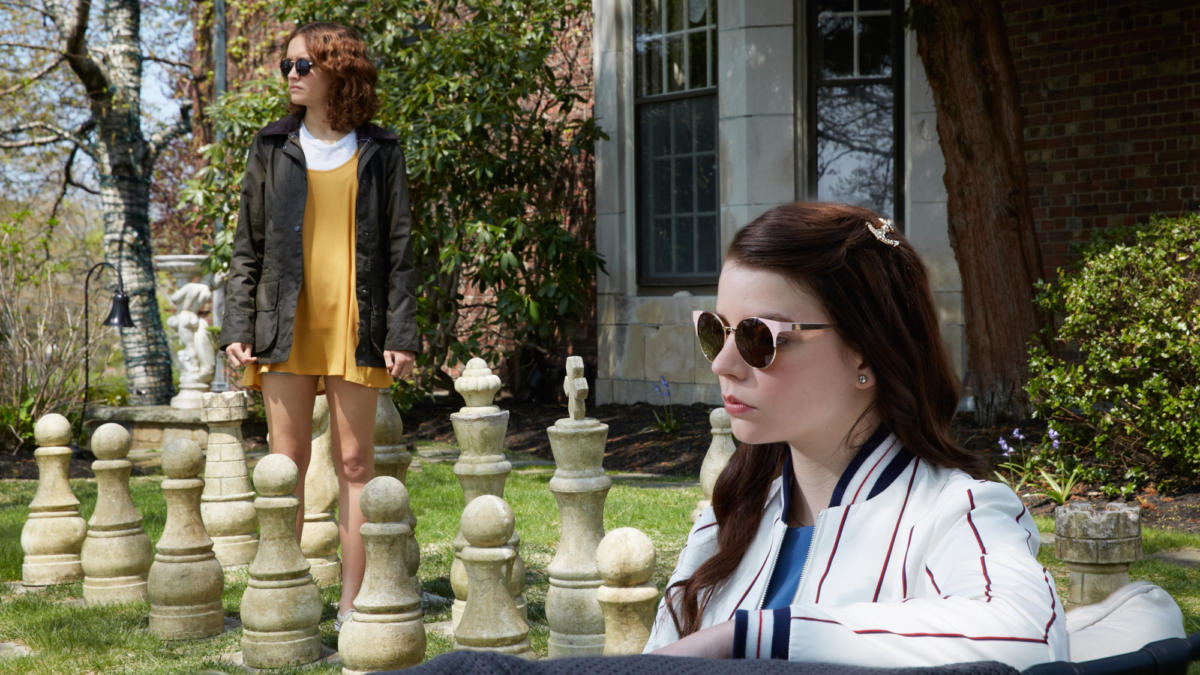 Debut features are tough.  Tougher still, black comedies.  Add a dollop of teenage drama.  And you have a mixture of clichéd indie debut feature disaster.  Thoroughbreds sidesteps the clichés inherent in its premise.  What could have been a cheap Heathers knock-off for the millennial set is anything but.  The film has more in common with David Fincher than your typical coming-of-age teenage drama released by a studio. Thoroughbreds’ steeps itself in the apathy of these teenagers’ disaffected selfish nature bending it to murderous credulity to the point of comedy.  Be warned, Thoroughbreds is the darkest of comedies toeing the fine line between drama and comedy that few successfully can balance.

The film begins with images of a young woman and a horse staring at one another.  It’s midnight.  Shots of a knife.  Blackness.  Inhuman sounds.  Things are not well in this particular nameless suburbia.  We learn Amanda (Olivia Cooke), the young woman with the horse, has been hired to study with Lily (Anya Taylor-Joy).  Former friends who like many went their separate ways as they began high school into different cliques.  The interaction is cordial and pleasant but a darker undercurrent bleeds to the surface.  Amanda initially pushes Lily, taunting her with honesty, Lily pushes back with honest designed to hurt, reactive.  Thus sets the dynamics in play for this relationship.

Amanda and Lily test, push, pull and prod at one another’s artifice. They quickly begin to realize they could be kindred spirits of sorts.  Young women hiding darker souls than your average disaffected wealthy teenager.  Through these interactions and conversations, Amanda and Lily form an uneasy relationship. Though unsure of one another’s true intent they begin to learn about each other’s problems finding possible sociopathic solutions.

These intimate moments between Amanda and Lily are not your typical disaffected teenage life of the wealthy.  Writer/Director Cory Finley imbues the relationship with a sense of class and status.  We are always keenly aware that Amanda comes from a family of lesser financial means than Lily.  The way that Finley plays with the dynamic that it creates between these young women is fascinating.

As they begin to plot the unthinkable, Finley is able to make pointed observations about class and subservience to money.  Adding a third component in the form of Tim (Anton Yelchin) only elaborates on this particular thematic.  Tim a low-level drug dealer swimming in the dead ends of the service industry has dreams of financial success, which are constantly mocked by the Lily and Amanda.  These Teenagers already understand what a working-class twenty-something does not; he will always be exploited either by them or someone else and they will always have the shortcuts and advances he will never have.It’s in these and its final moments that Thoroughbreds rises above what we’ve come to expect from films about teenagers.

Thoroughbreds plays into what makes cinema great; unexpectedly twisty story that defies thematic conventions.  The film plays on so many layers with so much said about class, money, parental-child dynamics, patriarchal dominance, empathy, subjectivity audiences will still unpacking it all long after the credits. This is a truly complex portrait of two young women that isn’t about boys, dating or their “sexual awakening”.  Thoroughbreds’ strives and succeeds at being more than the stereotypes that liter teenage comedy or drama.

Thoroughbreds is in limited release on March 9th.