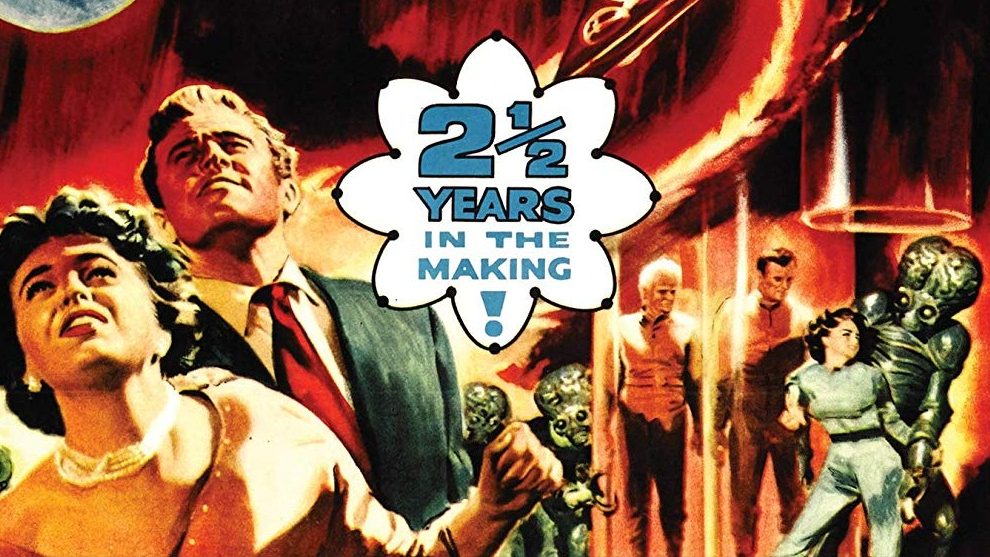 Adam loves This Island Earth and is glad Scream Factory has given it some of its luster back with this new Blu-Ray Edition with a beautiful new transfer and a wealth of extras.

This is the movie that confirmed my dislike for everything that MST3K does.  I was kinda onboard when MST3K first premiered.  As a teenager, I had a massive love for all things cult (still do) and MST3K was sort of that.  It always left me with a bad taste because of how snarky they were.  It wasn’t until the MST3K movie that I was done with them.  They took This Island Earth as its subject.  It was at that point, I was done.  Not because they were mean-spirited or that as I had said they were snarky, it was because there was no affection for the films.

I realized that I felt they hated the movies they covered, especially This Island Earth, a film that I loved.  I hold a special place in my heart for cult movies and they do a disservice for cult films making it okay to shit on them sight unseen.  In fact, I will make a bold statement that 70% of those that watch MST3K are those people that ironically watch these movies without any sort of love and affection.

I am here to tell you that This Island Earth is not bad but it’s a damn fine Sci-Fi Adventure Film from the 1950s.  Yes, it’s a bit silly but not in the way that MST3K treats it.  The film is the kind of grand sci-fi adventure yarn we rarely see anymore.  Grounded, for the time, politically savvy, big, epic storytelling done with the sort of Flashy Technicolor photography that Pal’s War of the Worlds was done in.

Yes, the story is fairly straightforward and boilerplate for a lot of Science Fiction throughout the decades; Scientists get instructions from an Alien race and build what is from said instructions leading to a grand adventure.  What separates This Island Earth from the countless iterations of this story template are the small touches that are built within the film.  The story beats about space travel, scientists from all parts of the world, the design of the aliens.  All play adroitly, albeit a bit goofy considering some of the stilted acting of the time, even for 2019.

Scream Factory has gone all out with this new 4K Scan of the Inter-Positive.  This transfer is nothing short of spectacular.  The three-strip Technicolor process creating those amazing colors of the 1950s is represented here perfectly.  The transfer retains all the beautiful grain structure from the original film elements giving the transfer a look of a pristine 35mm archival print.  Those that love and actively seek out new transfers for classic films will want to buy this disc just for the transfer alone.

Also included is a restoration of The Original Perspecta Stereophonic Sound Restored By 3-D Film Archive 3D.  The restoration can be played only if you have a 5.1 sound system.  The soundtrack is not full on Dolby Surround but it does separate the sound and makes for a great experience.  If you have a 5.1 sound system set up you’re in for a treat.

Note the film is presented as both 1.78 and 1.33. The window box presentation (1.33) is a special feature.  Though the 1.33 presentation is more accurate to what people would have seen in 1955, though the 1.78 framing is actually more pleasing of a framing.  The mere fact that Scream Factory has given the two options speaks volumes to them knowing their audience but also just plain respect for a visually stunning film.

The Audio Commentary by VFX Supervisor Robert Skotak discusses the history of the film, production, and other fascinating anecdotes about the production.  Some of it is reviewed in the Making-Of included here but most of it is fresh and compliments the making of.  A great commentary for anyone who’d like to know more about this forgotten classic.

The Audio Commentary by David Schecter is more based on the Music of the picture. What is not listed is this commentary is also an Isolated Score.  Well, the score is re-recorded by Schecter, as the original score cannot be sourced.  Schecter’s commentary is very informative including things like Henry Mancini wrote some of the credit.  Score junkies will love this commentary for a truly great film with equally great music.

Alien Idea – Luigi Cozzi on This Island Earth is a 21-minute interview with the great Italian Genre director.  Cozzi opens the interview with a bit of a treatise on the youth that comes to see him and know everything about films from the last decade or two but no nothing of Classic Genre cinema.  Cozzi confirms the first time he saw This Island Earth when he was ten years old and forever changed him.  Cozzi goes on to discuss the themes, the film itself, what he loved and still loves about it.

This Island Earth – Two And A Half Years In The Making: The Extended Documentary is a 45-minute behind-the-scenes Making-Of featurette. Divided into chapters and featuring VFX Artist Robert Skotak, Film Historian Courtney C Joyner, Director Joe Dante, Film Music Historian David Schecter, and others all contribute to discussing both the making of the film and the film itself. The chapters thorough reviews the development, making-of, release, and history of this landmark film. Interestingly, the documentary does go into how the film was acquired by Universal-International and how the films at the time of making of This Island Earth they were in a state of flux in their state (funny how regime changes never change, just look at what is happening now with Warner Brothers).  From this flux came This Island Earth giving it a huge budget and filmed in Technicolor.  Other details include fascinating tidbits like the rushed production, a certain famous “Professor” from TV that was cast as a secondary character, filming on back lots, and the special effects and how they were accomplished. The best part is everyone’s reaction to the MST3K: The Movie especially Joe Dante.  All in all, it’s a great making-of documentary.

Facts About Perspecta Stereophonic Sound By Bob Furmanek is a written feature that’s about 9-minutes long that plays out with the original documents for the magnetic strip 3-channel sound system.  Much of it is articles from various trade publications. Perspecta would pave the way for not just 70mm Magnetic stereophonic sound but also for Dolby and all of the other advancements we would make it sound over the next seventy years.  A great archival featurette that deep dives into something rarely discussed if ever, Classic Hollywood sound.

Trailers From Hell – This Island Earth With Commentary By Filmmaker Joe Dante is 3-minutes long.  Those that are familiar with Trailers From Hell know that these are micro-commentaries by famous directors or creatives discussing the trailers to their favorite (or not so favorite films).  Here Dante is discussing the classic film with much affection as he was 9-years-old at the time of release.

WAR OF THE PLANETS is an 11-minute featurette that combines both the 8mm and 16mm home release from the 1958s from Castle film.  The featurette begins with the advertisements for This Island Earth, renamed War of the Planets for the release.  It delves into each of the version of the film.  It’s a fascinating look at what was an early Home Video Market.  The 8mm is silent and black & white amounting to about 2-minutes.  The other version supposedly 16mm, is still black and white, with sound and lasts about 8-minutes.  The quality on both editions are very poor but considering that these are sources probably from the only surviving copies of both you get what you get as they say.  Other labels, like British Label Indicator, have included other 8mm and 16mm home releases on their discs and its some of the best special feature material on those discs. Here is no different.

This Island Earth is a great Sci-Fi Adventure.  This Scream Factory edition will go a long way to help it be reassessed with a beautiful transfer and a wealth of extras.  Highest Possible Recommendations!!!