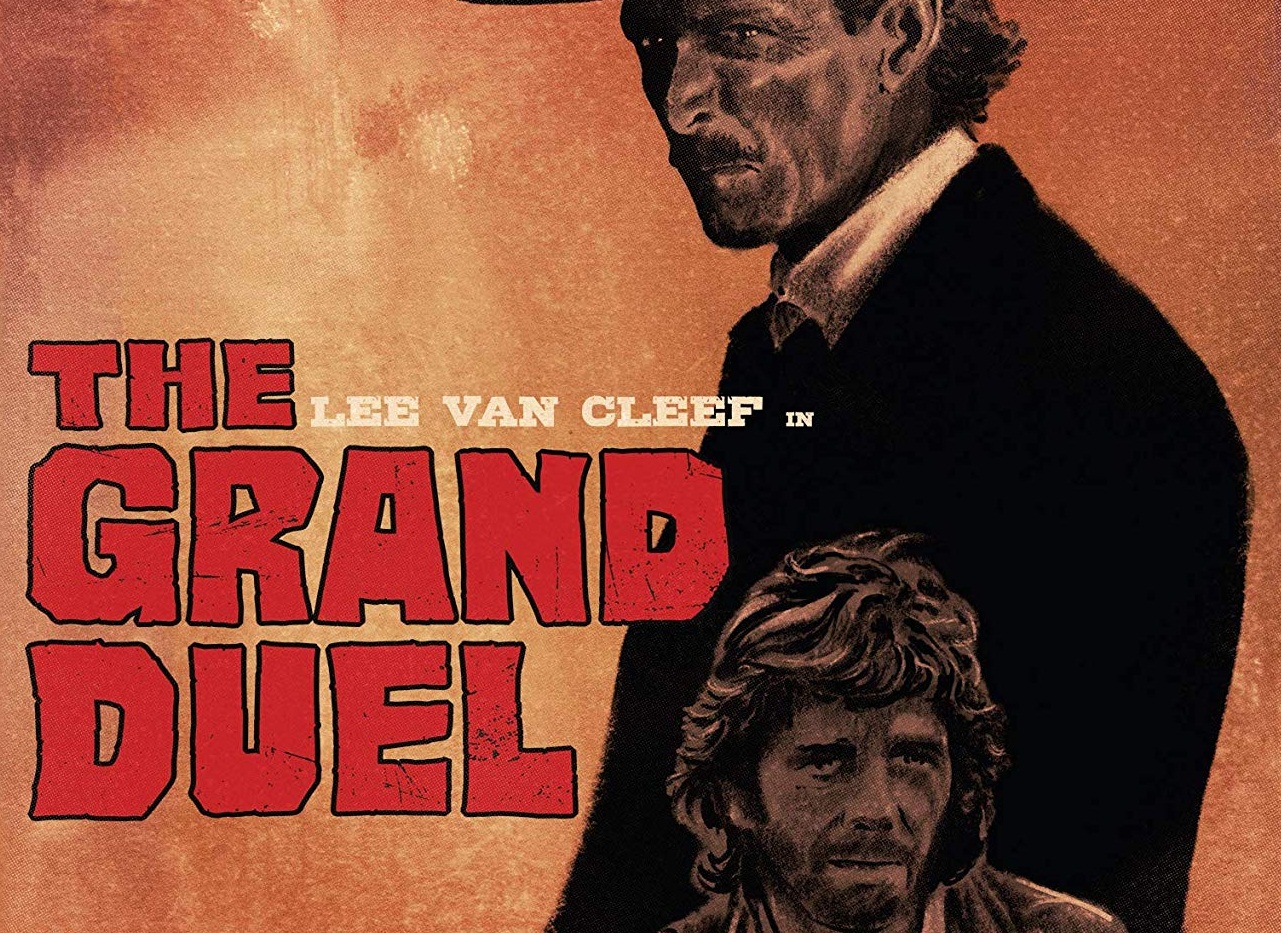 Adam again heads into the world of the Twilight Spaghetti Western with The Grand Duel starring Lee Van Cleef.  Arrow Video has released the film on Blu-Ray with a beautiful transfer and a host of extras.

Many will know this film for one piece of cinematic lore.  Quentin Tarantino used a section of the Score from this film in Kill Bill Vol. 1.  The Grand Duel has one of my favorite troupes or subgenres in Genre filmmaking; the Bounty Hunter vs. the Criminal.  From Midnight Run to Django Unchained to Pitch Black to True Grit to Domino there is so much ground to be covered by these Man/Woman hunters.  The Grand Duel stands as one of the most stylish and twisty of the subgenre with Lee Van Cleef in one of his best non-Leone roles as Clayton the sheriff turned bounty hunter.

Part of what makes The Grand Duel such an entertaining Western is the central mystery of who killed rich overlord of Saxon City, Ebenezer Saxon.  Philip Wermeer (Peter O’Brien aka Alberto Dentice) the main suspect is besieged from all sides by Bounty Hunters, Criminals and Saxon’s family wanting either his head or the bounty on it … sometimes both. Philip a slick operator meets his match in Clayton (Van Cleef) a Sheriff turned Bounty Hunter.  These two match wits as the film progresses deeper into the central mystery of who killed Saxon.  Along the way we get stand-offs, double crosses, triple crosses, hell even quadruple crosses.  It all ends with the sort of ‘Ah-ha’ moment that makes one want to rewatch the entire enterprise over (and over again).

The Grand Duel at face value is a damn good western, but underneath lies a much more astute western with an intricate clockwork style plot that is not revealed until its very end.  Much of the work Ernesto Gastaldi does is moving the pieces of characters and plot to the correct places for maximum effect.  It is only upon rewatch does one realize how much work Gastaldi had to do, much like in Sergio Martino’s The Suspicious Death of a Minor, the narrative heavy lifting is done by him and not the director.

Watching the film one would think that this was a lost Leone film that the director was unsatisfied with and had locked up in a vault.  It is no mistaking that Santi was Leone’s assistant director for his most iconic work as the director has a flair for composition the way that Leone did.  The direction compliments the intricate script work with stylish touches like black and white flashbacks or the way that he draws out a gun fight.

Van Cleef as Clayton is as Iconic a role as the star had gotten. It was also late enough in his career he understood how to play this role to perfection.  Like Eastwood, the actor knew that a look said/says more than any words said in cinema.  Clayton is a character who holds all the cards but doesn’t play them until the very last moment.  The slow gait (which was from an earlier injury on another film) helps Van Cleef’s entire performances, a man who does not need to move quickly as he knows exactly how this is going to end.  It’s a stunner of a performance.

The Grand Duel works because of the three-headed filmic hydra known as Star Lee Van Cleef, Director Giancarlo Santi, and Screenwriter Ernesto Gastaldi.  Together they have created a Twilight Spaghetti Western that’s one foot in the Italian Genre films of the past and one foot in the future.  The results are completely satisfying and well worth watching more than once.

The new 2K restoration from the original 35mm camera negative that Arrow Video has used for this Blu-Ray release is gorgeous.  Having tested a few of the different transfers available online the difference is night and day.  The film’s image sports a beautiful sheen of grain along with a dense color reproduction that truly gives you that lush almost wet print feeling.  Nary an ounce of DNR or any sort of digital upscaling giving this transfer that clean imperfectly perfect image that has become a cornerstone of Arrow Video’s preservation work on Home Video.

The commentary by Stephen Prince is a great albeit one that is more scholarly looking at the critical and historical context for the film, its stars, and creatives behind it.

An Unconventional Western is a new 31-minute interview with director Giancarlo Santi. The director discusses his career beginnings, his relationship with Sergio Leone (both personal and professional), how Duck You Sucker unformed his career and the making of The Grand Duel. The interview is quite thorough in its coverage of all aspects of the film. What’s interesting is how unfiltered he is about the behind the scenes drama with his almost-first film Duck, You Sucker. The interview is in Italian with English Subtitles.

The Last of the Great Westerns is a 25-minute interview with screenwriter Ernesto Gastaldi. This interview is possibly the best feature on the disc. The screenwriter is in top form and is alternately hilarious, angry, and best of all honest. More than an interview about The Grand Duel, Gastaldi gives us a wild ride through his life in Italian cinema. It helps that Gastaldi is a grand storyteller that will make you laugh as he will interest you in his tales both tall and real. He does speak at length about the writing and production of The Grand Duel and the ending of the Spaghetti western. The interview is in Italian with English Subtitles.

Cowboy by Chance is a 35-minute interview with actor Peter O’Brien aka Alberto Dentuce who plays Phillip the co-lead of the film. The actor who initially wanted to be (and was) a successful musician discusses his early life as an actor and the struggles which lead to moving to India and a chance audition with Michelangelo Antonioni lead to meeting Santi the director of The Grand Duel. It is a fascinating watch about a truly unique life lead by the actor. His discussing of Lee Van Cleef are particularly entertaining and twinged with a bit of honesty we usually don’t get in these types of interviews. The interview is in Italian with English Subtitles.

Out of the Box is a 29-minute interview with producer Ettore Rosboch. Beginning with a hilarious and honest story of how and why this film got made, Rosboch is as entertaining an interview as Gastaldi. Rosboch conversation is definitely on the business/technical behind the scenes side of the film. The interview is in Italian with English Subtitles.

The Day of the Big Showdown is a 21-minute interview with assistant director Harald Buggening.  The very technically minded discussion covers all the bases of Buggerning’s work on The Grand Duel and his long term relationship with Santi as he was an AD on many of Santi’s best work.  The interview is in Italian with English Subtitles.

Two Different Duels is a 15-minute featurette that compares a longer German version.  The only unfortunate part is that they couldn’t find a good enough source to include the German Version as this featurette is a fascinating glimpse into Alternate versions.

Marc Mazza: Who was the Rider on the Rain is a 13-minute video tribute to Marc Mazza who plays the primary villain David Saxon in the film.

Game Over is a Sci-Fi short starring Mazza that Arrow has included as a sort of companion piece to the tribute to Mazza.  The short runs around 9-minutes.

Rounding out the special features is an Italian Trailer, International Trailer, Still Gallery, Poster Gallery, Lobby Card and like Keoma before it divides into the various sections.  The trailers are very similar to one another except the Languages being spoken (Italian in of course Italian, International in English).  The Galleries are divided into three sections: 1.) Stills, Posters, and Press, 2.) Lobby Cards, 3.) Super 8mm, Home Video, and Soundtrack leaves.  These are each an embarrassment of riches with close to a hundred images that vary from VHS covers to Lobby Cards to strangely colored Production Stills.  The Stills Posters and Press runs automatically for around 3-minutes, the Lobby Cards runs the longest at around 6-minutes and finally the Super 8mm, Home Video and Soundtrack Sleeves runs around 3-minutes.

The Grand Duel with its beautiful transfer and wealth of extras is a Top Ten Blu-Ray disc contender.  It goes without saying this disc gets the HIGHEST POSSIBLE RECOMMENDATIONS!!!!!!