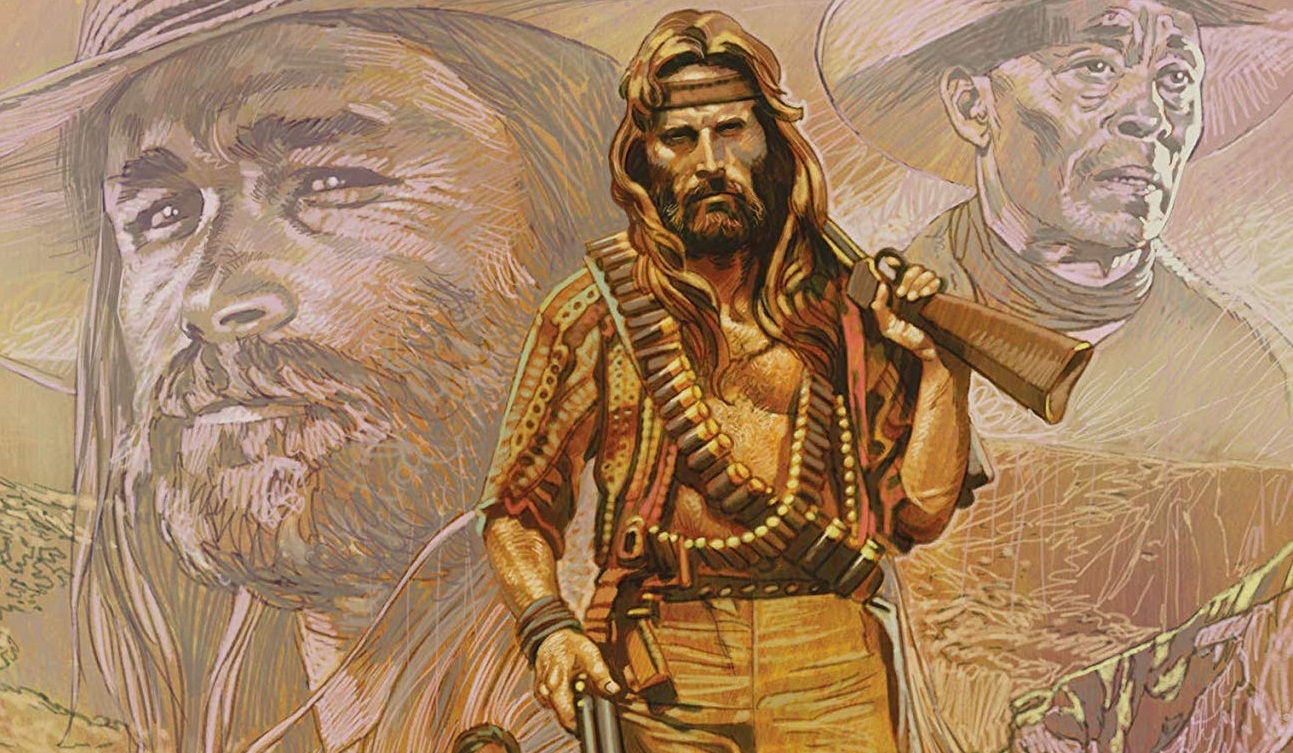 A film rode into Adam’s Blu-Ray player to specifically kick his ass.  What was the Blu-Ray?  Arrow Video’s edition of Enzo Castellari’s Keoma and kicked his ass it did.

One of the last great Spaghetti Westerns, Keoma, is both star Franco Nero and director Enzo G. Castellari best work. The film is both filled with homage (and outright theft) along with some truly wonderful original moments.

The film is a tired and true setup; Keoma (Nero) comes back to his home town after years fighting in the Civil War as a Union Soldier. He comes home to a town besieged by ex-Confederate Soldiers led by Caldwell (Donald O’ Brien), his brothers still the selfish-racist assholes they were are in league with Caldwell, and his old friend and mentor George (Woody Strode) in destitute. It is only a matter of time until Keoma begins to fight back for not only himself but for the entire town who are being systematically wiped out by the plague.

One could say that Keoma, the film, like its title character is of mixed origins. Castellari leans heavily on a mixture of Peckinpah’s slow-motion balletics, Leone use of shot selection, and Altman’s use of Music (the film’s score is heavily influenced by Leonard Cohen’s from McCabe and Mrs. Miller).  These thefts from other filmmakers are not trite “this is cool” genre applications though.  Castellari, like Tarantino after him, understood how style and the application of it worked in cinema.  Though he may have stolen, the use and actual style are all his own.  Keoma and its stylish direction at the end are such it’s own unrecognizable to the others and the films it uses as reference points it becomes Castellani’s personal signature. Part revenge film, part family drama, Keoma feels like a Western of biblical proportions told on an intimate scale.

Nero as Keoma owns the screen. The actor finds the quiet emotions of the half-Indian half-white veteran in a way only he could. Initially, the actor early in his career was cast for his good looks.  He found his footing in the ’70s and ’80s, and his greatest skill set; being laconic and going for subtle rather than broader. As Keoma those skills are used to absolute perfection. Nero is the calm eye of the storm, waiting for his moment to explode.  The bends to his style of acting heavily relying on this tone-poem like narrative interludes into the past.  Which play into Nero’s laconic style perfectly as though the film were mind-reading Keoma’s every thought. It is the best marriage of Actor and Part since The Man with No Name and Clint Eastwood.

Keoma and its director may have ripped off, in some cases wholesale from various other directors and properties but it works in spite of that.  Both Nero and Castellari give it all a swirl and a new coat of paint making Keoma not just a good Spaghetti Western but a truly Great Film. This is one that if you haven’t seen, see it right away.

This new 2K restoration from the original 35mm camera negative is nothing short of perfection. The two perf 35mm shot film could be a nightmare to transfer. Arrow has created a beautiful razor sharp image with amazing grain structure. Bravo to Arrow for taking its time and giving his a near flawless Transfer.

The Ballad of Keoma is a new 22-minute interview with Actor Franco Nero. Nero is upfront about the film, it’s his favorite of his filmography. He then dives into how he came to the project. Which started with the almost casting of William Holden as Keoma’s father. He discusses everything about the film from the beautiful music, working with Castellari, how the director was a former boxer, how they met, they worked on the script. It’s a great and fascinating interview with the legend. Even a small discussion of a possible Keoma sequel he’s working with Castellari.

Ashes to Ashes, Dust to Dust is a new 29-minute interview with director Enzo G. Castellari. The technical discussion covers all areas of the production including a talk about framing and using Technoscope (aka 35mm 2perf) and working with Nero, development of the script,

Writing Keoma is a 16-minute interview with actor and writer “George Eastman” aka Luigi Montefiori. The co-writer of Keoma discusses the film’s origins which started with a comic strip and evolved from there. The primary discussion from Eastman is the changes from the script being more fantastical with the character of the witch which was to play a bigger part.

Parallel Actions is a new 22-minute interview with editor Gianfranco Amicucci. Who started as an AD on Eagles Over London with Castellari and moved onto editing the director’s films. The editor discusses the technical difficulties in editing Castellari’s films including Keoma. He also discusses how Castellari differentiated himself from other Italian directors at the time (such as having 2,000 cuts in his film which was two to three times more than the average Italian film at the time).

The Flying Thus is a new 24-minute interview with Actor Massimo Vanni who plays one of Keoma’s brothers. Beginning with Castellari casting him numerous times in roles that required him to jump.

Play as an Actor is a new 30-minute interview with actor Wolfango Soldati. A life long friend of Castellari, Soldati discusses how his father and Castellari’s worked together in film and how this led to their friendship and eventually working together as Actor and Director.

Keoma and the Twilight of the Spaghetti Western is a new 19-minute Video Essay by historian Austin Fisher. Discussing the Editing rhythms, how Castellari shot and created this film leads to a greater understanding of the film as it relates to a larger cinematic framework. It’s a great informative essay on how Keoma and the Spaghetti Westerns End is important to cinema as a whole.

The introduction by Alex Cox is ported over from the Synapse disc. The 5-minute overview is a great way to prep one selves for the greatness that is Keoma. Cox goes very deep into the Franco Nero and Castellari’s filmographies.

Rounding out the special features are two trailers and an image gallery. The international and Italian trailer running at almost 4-minutes is as epic as the film itself and basically the same trailer with few minor edits and the language (International is in English). The image gallery is amazing. Divided up into 4 sections; Production Stills, Posters and Press, Lobby Cards and Home video and Soundtrack Sleeves. This catalog of images is amazing. Production stills runs around 3 1/2 minute and are about 20 stills. Posters and press also runs around 3 1/2 minutes and is about 22 stills (including Press Notes!). The most impressive is the Lobby Cards which automatically runs at close to 11-minutes and has a whopping 65 lobby cards from various counties. The Home Video and Soundtrack sleeves runs 5-minutes automatically or around 30 stills of the VHS, Laserdiscs, DVD, Album, CD covers from various times and locales.

Keoma is the real deal; a truly great Western that deserves its rightful place next to classics like The Good The Bad and The Ugly and Once Upon a Time in the West.  This Arrow Video Edition with the amazing transfer and wealth of special features giving the film context in history gives this its best shot at that very thing. HIGHEST POSSIBLE RECOMMENDATIONS!!!!!!!

Arrow Video’s Blu-Ray Edition of Keoma is out now