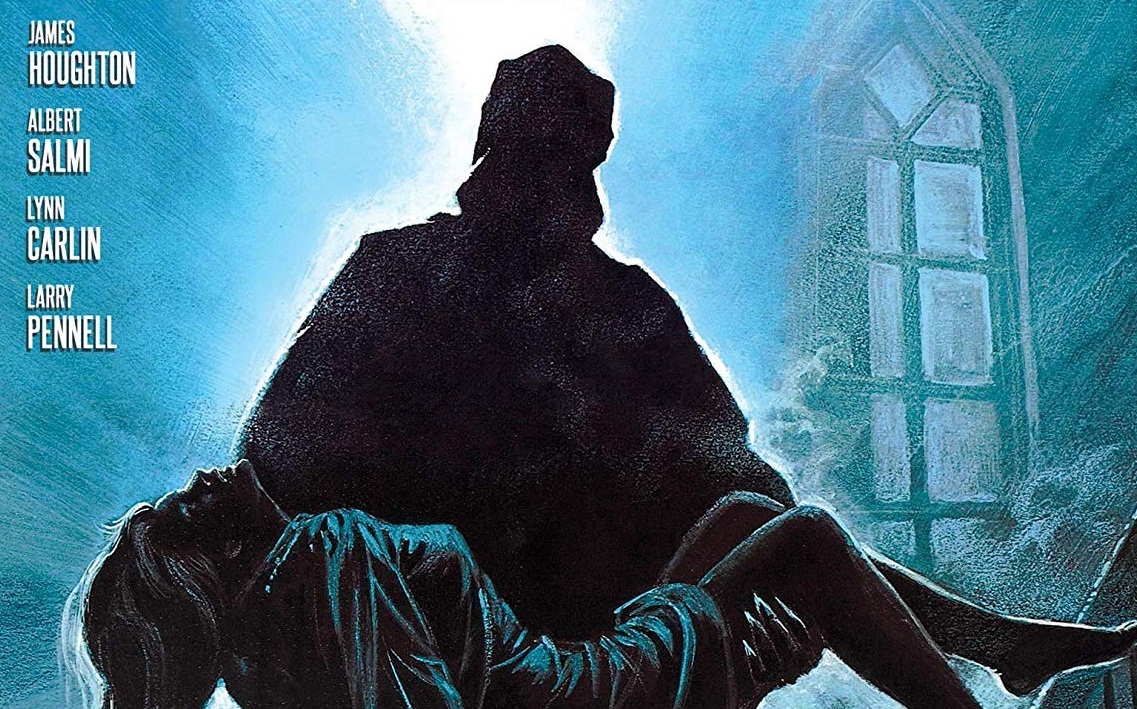 Hold on to your butts… another weird crazy horror film Superstition is being released by Scream Factory on Blu-Ray with a Shiny New Transfer.  Does it live up to The Manitou?  Read on…

Superstition is both clever and stupid. Yes, a contradiction in terms. This Possession-Witchcraft-Revenge film has moments of truly inspired storytelling only to fall flat on its face with atrocious acting and direction. Unfortunately, great acting can overcome bad writing, oftentimes the reverse is not the case. As is with superstition.

A witch that’s burned at the stake vows vengeance on the Quakers that did her wrong. Cut to two hundred years later and the church who sanctioned the burning still owns the property this happens on. As these things go there’s new Reverend Thompson (James Hough) and the older Reverend Maier (Stacy Keach Sr. who appears to be in on the joke) at odds with one another, and a family lead by George (Larry Pennell who doesn’t appear to be in on the joke) factor into the witch’s vengeance plot. Needless to say it not clever. Neither is the Ending that attempts to recall the classics of the subgenre, just comes up short.

Part of the good is how the film begins its second act and how things slowly are revealed. The film unfolds like a detective story with the younger reverend doing an investigation, all on his own of course, into the murder that keeps occurring. How the film alternates between the supernatural and practical human behavior is where the film works best. It is when the family becomes the center of the story the film is all but ruined. The people cast as the Leahy sisters is the primary source of grief. Neither can really be considered actors as what they do in this film is certainly not that. As they become a major part of the plot the film collapses under their inabilities.

Just because a film is terrible does not mean the transfer has to be. Scream Factory has been given a 2K transfer from StudioCanal. The Transfer itself sourced from the best element StudioCanal had to work with.  That being said, it is a vast improvement over the other Home Video Releases. Having sampled the other transfers this is a huge upgrade in clarity, image sharpness and color. The film doesn’t have great contrast but as compared to the other iterations it’s as good as it is going to get. For a fan of Superstition, this will be a treat.

That Crazy Witchcraft is a 24-minute interview with the director of the film.  The interview covers Roberson’s beginnings, work as a cinematographer and other production anecdotes from how Superstition came to be.

Lake of Fire is a 30-minute interview with the star of the film James Houghton.  Interesting of note is that Houghton is Hollywood royalty of sorts as he’s the son of one of the Twilight Zone Producers.  Houghton does hide this fact which is sort of refreshing.  He details his life leading up to Superstition and discusses the production with a healthy amount of candidness and humor.

Round out the extras are a Trailer and TV Spot.

This one is only for the Super Fans of Superstition. If your slightly curious rent before purchase as you’ll want to know what you’re getting into.

Scream Factory’s Blu-Ray release of Superstition is out now