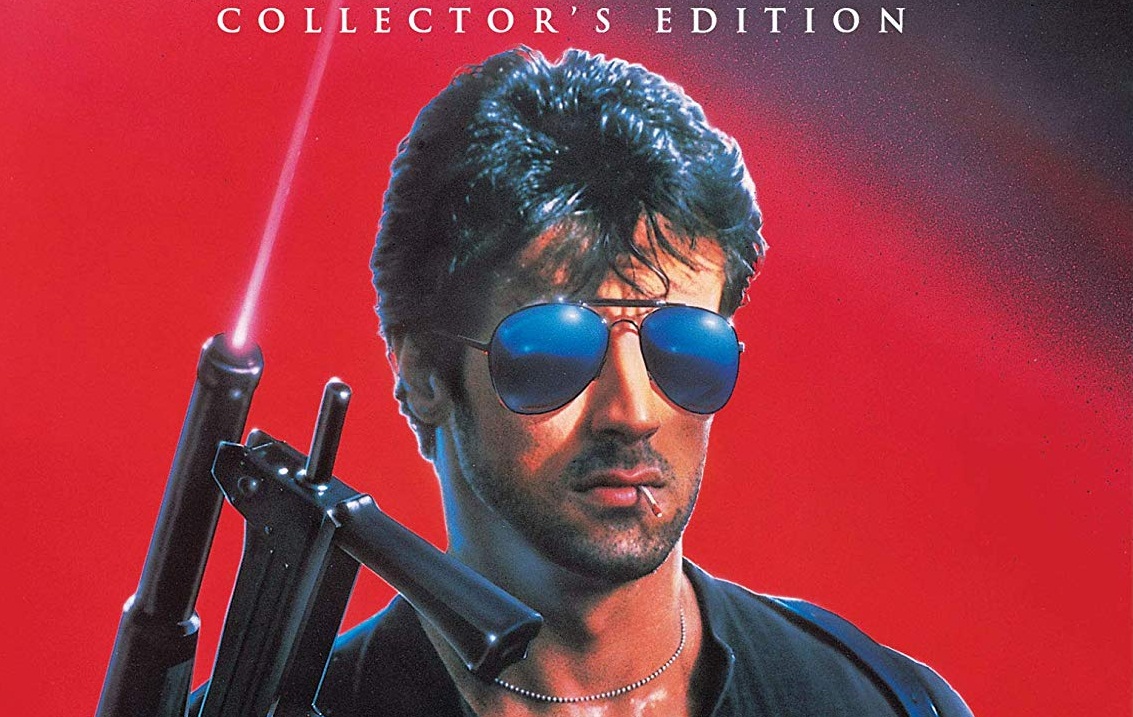 Adam goes back to the most ’80s of all ’80s Cop films with George P. Cosmastos’s COBRA starring 80’s Icons Sylvester Stallone, Brigette Neilsen, and Cult God Icon Brian Thompson.  Scream Factory is releasing this piece of awesome kick assery with a new transfer and locked and loaded Extras.

There are two types of people in this world; those who love COBRA and those that hate COBRA. I happen to love COBRA. The film is both a Reagan-Era fevered dream and also an ACLU nightmare.  The George P. Cosmatos directed the film at 87-minutes may be one of Stallone’s best and worst films of the 1980s.

The film boils down to one clean concise sentence. LAPD Detective Marion Cobretti verses a cult lead by Brian Thompson playing Brian Thompson.  That is it.  You could even say it is Stallone vs. Cult.  The film is a build up to the ending a Mano a Mano fight between Stallone and Thompson in the middle of a foundry that was the inspiration for approximately 97.8% of metal band music video.

COBRA does show Stallone at the height of his powers as a superstar.  The film is shot like an over-fetishized porn.  Cosmatos and Stallone spend more time perfecting close-ups of the star’s Mirror Shade covered visage than they do on any sort of characterization for his or any other characters.  It’s the type of film that its empty style is the substance of the film.  There is no reason why this cult is doing what it’s doing other than to do.  There is no reason why Cobretti is a fascist super cop, he is who he is.  There is something glorious about the wanton destruction and violence that unfolds at the end of the picture.  The final twenty minutes is a non-stop chase that ends to the above-described fight.

COBRA is the kind of film that is pure unadulterated empty calorie cinema that Commando, Raw Deal, and Tango and Cash are. It is not to give them any sort of criticism for what they are. Though to say COBRA is perfect is also a complete fallacy. Like most films COBRA falls somewhere in the middle. The film excels at its stylish action.  In the end, the film delivers the kind of kick to the groin that was the delight to action fans thirty years ago.

At this point, an action fan should know where they fall on this particular Stallone masterpiece. Yes, it is a masterpiece.  An imperfect masterpiece of ‘80’s cocaine-fueled steroid-addled Cop Action.

The new 2K Scan Of The Original Film Elements is nothing short of gorgeous.  Having owned COBRA on VHS, Laserdisc, DVD (twice), and the previous Blu-Ray, this edition outshines them all.  Shout Factory has taken the 2K scan and given it a bit more life than the last Blu-Ray incarnation.  Where the WB Blu-Ray was serviceable it was from an older HD transfer (from the DVD days) and it shows its age.  Here they’ve gone through and given us a transfer that sides on a more filmic style of transfer with a healthy amount of grain.  Films from this era were filmed on crap film stock (see Terminator as a prime example) but with the right care, they can look good.  This is the case with COBRA which looks amazing.

The special features include the following:

The Commentary recorded in 1997 by Cosmatos is fairly pedestrian.  Though there are some great anecdotes but most of the time is describing what is unfolding on screen and details of the story.

Stalking and Slashing with Brian Thompson is a 26-minute interview with the cult character actor on the work that he did in the film and his career writ large. He has a great Terminator story and how it lead to more work and specifically how he got COBRA. Worked as the villain in the Conan stunt spectacular and the emotional moment. The reverence for Stallone and his career. The honesty that he comes to with the work he’s done here is shocking. It’s great though because of the craziness. He does take Cosmatos to task on multiple issues which you’ll want to see.

Meet the Disease with Marco Rodriguez is a 24-minute interview with the character actor who plays the grocery store shooter that opens the film. Rodriguez discusses how he came to be in COBRA. How they (he and Stallone) came up with the name, The Disease, as even in the script he had no name. Rodriguez confirms how Stallone worked as the acting director and Cosmatos’ temper.  Rodriguez goes beyond COBRA and how it helped his career.  Watch for Rodriguez pull out his original script at a certain point.

Feel the Heat with Andrew Robinson is a 14-minute interview with the actor who played the DA. The actor does not waste any time as he begins with recounting the original (better AND crazier) ending of the movie and his character, which would have made a great bookend to another famous character he played. Robinson suffers no fools in this interview as takes the film to task about the lack of story and characterizations.  He too is honest about his dislike of the entire production and the way that Stallone had ghost-directed the film.

Double Crossed with Lee Garlington is a 9-minutes interview with the actress. Her honesty about why she took the role, is very refreshing.  Garlington does discuss the strife on set but not to the extent that both Thompson, Rodriguez, and Robinson do.

A Work of Art with Art Le Fleur is an 8-minute interview with the actor on how he got the part. He’s a bit nicer but confirms everything the actor’s before had.

The vintage featurette is 8-minutes of glorious ‘80s EPK lunacy. Some of the things that Stallone says are amazing and funny and coke-fueled. Brigette’s work (she was only 22 at the time). Best of all the featurette has multiple clips of Terry Leonard aka LEGENDARY STUNT GOD talking very pragmatically about the stunt work and comparing Stallone to John Wayne.  All to say this one is NOT TO BE MISSED.  A special thanks to the Content Producers on all Scream and Shout Factory discs.  It’s these types of special features that they’ve dug deep-deep into the archives that make these (and this disc) worth the price tag and so special.  As long as they keep putting these on their discs (see Starman and any other number of discs for similar types of featurettes) I will keep singing the praises from the rooftops.

Teaser, Trailer, Galleries round out the special features. The galleries are not to be missed especially the lobby card and poster section.  Both run about five minutes each and can be paused and gone through manually or let it run automatically. Trailers are great too.  The teaser is vintage ’80s awesome sauce.  When one watches the trailer, they can feel that many directors “in love with the ’80s” are aping this EXACT style from the trailer.

COBRA is still a piece of badass action cinema.  Scream Factory has brought this bad boy to Blu-Ray with a revelatory transfer and a host of truly great extras.  RECOMMENDED!!!!

Scream Factory’s Blu-Ray edition of COBRA is out now!