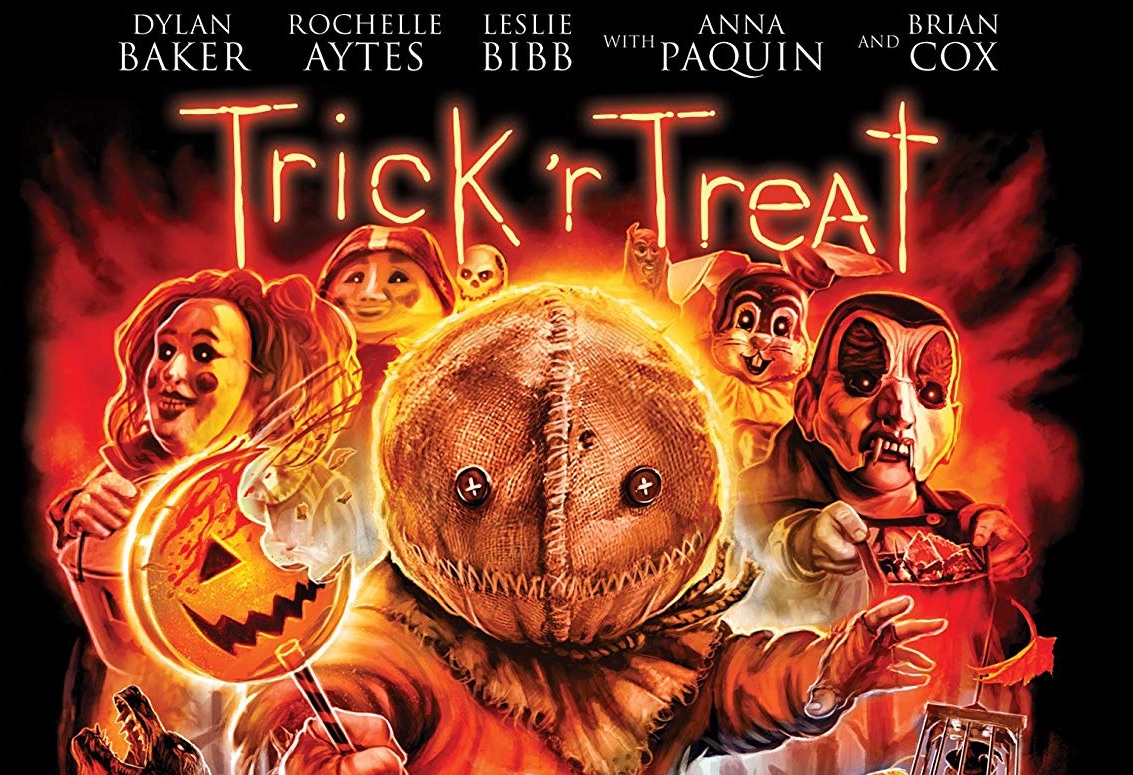 The Horror Comedy Anthology, Trick ‘R Treat comes to Blu-Ray in a new Collector’s Edition thanks to Scream Factory.  The disc comes loaded with new features and a transfer.

Somethings get better with age.  Like wine rather than vinegar.  Consider Mike Dougherty’s Trick ‘R Treat that vintage ’68 Bordeaux.  The gold standard of anthology films.  Trick ‘R Treat’s bold storytelling structure and a mixture of scares, gore, and comedy have risen it to that rarefied field of an anthology film that many a horror fan calls “The Pulp Fiction of Horror films” and rightfully earns it.

Trick ‘R Treat melds four storylines effortlessly into one non-linear narrative taking place during Halloween.  The first is a father and son spend some very strange bonding time, but not before the father has to dispose of the body of an annoying teenager he happened to kill.  A young college-age woman is pressured by her friends to bring a boy to their kegger.  A group of tweens decides to play a prank on an innocent girl whose love of Halloween may save her.  An old man confronts his past demons in the form of Sam the Impish demon of Halloween.

Few filmmakers have shown their affection for Halloween and the horror genre the way that Mike Dougherty.  Dougherty first a screenwriter on genre films such as X-Men 2 brought the kind of smart writing to this project as he had in major tent poles.  The film is visually acute the way that many screenwriters turned directors’ debuts are, thanks in large part to his work in animation.  That sort deep visual references that come in animation are present here.  There’s a beautiful autumnal color palette that they make the film unique to its genre counterparts as horror films go for the desaturated look rather than the bright pop.

The success of the film is all in its perfectly balanced tone.  Any horror comedy’s success is solely rested on how it manages its gore/scare to humor ratio.  Part science.  Part artistry.  All alchemy in a way that’s almost undefinable.  Trick ‘R Treat plays like a well-oiled magic trick, like many of its brethren.  Much of that is the understanding that the scare and gore are taken seriously and not for jokes.  Many Horror Comedies makes the mistake of mixing those two together, which can be done but sparingly.  Here the gross-out moments are played with a fun tone but never betraying the film’s respect for the genre, not making it a mockery.

Trick ‘R Treat is great fun.  It’s the type of fun that is just as much fun watching as it must have been to make it.

The new 2K Scan Of The Original Film Elements Supervised And Approved By Director Michael Dougherty that Scream Factory has produced is a serious upgrade from the original Blu-Ray release.  The decade of technological improvements to Hi-Def transfers has benefited the film.  The image is sharper and more consistently pleasing Black and Contrast Levels.  There is a light grain structure that gives this the feeling of a 35mm print rather than overly cleaned up transfer.

The commentary not only includes Michael Dougherty but includes concept artist Breehn Burns, storyboard artist Simeon Wilkins, and composer Douglas Pipes.  The commentary itself, which was ported over from the 2007 Blu-Ray Release, is solid with all participants contributing information about the film.

Tales of Folklore: Creating Trick R Treat is a new 16-minute interview with writer/director Michael Dougherty.  He discusses the creation of the Iconic Sam character. How it began as an animated short (did cell animation). How it was shaped as an anthology film. Stan Winston championed the project and came on as a producer. Storyboard artists came together for a visual package to present to the producers.

Tales of Mischief and Mayhem: Filming Trick ‘r Treat is a new 19-minute featurette that is basically a continuation of the discussion from the previous featurette Tales of Folklore. Here Dougherty discusses the Vancouver production, the modest budget, the visual design and thematically they were going for.

Sounds of Shock and Superstition: Scoring Trick ‘r Treat is an 11-minute interview with Dougherty and composer Douglas Pipes. The featurette discusses how Dougherty bringing on Pipes after watching Monster House. This like the previous two featurettes feel apart of the a greater whole.

Tales Of Dread And Despair: Releasing Trick ‘r Treat rounds out the featurettes.  This 7-minutes interview with Dougherty and writer/podcaster Rob Galluzzo. They discuss the Numb-Butt-AThon screening. How the film sat on a shelf for a time and was eventually released but not in theaters but on Blu-Ray, only to become a huge cult hit.

Season’s Greetings the short that inspired Trick ‘R Treat has been included here.  Scream Factory went so far as to rescan the original 16mm elements for a new 2K scan and included a commentary by Dougherty.

Trick ‘r Treat: The Lore And Legends Of Halloween is a 27-minute featurette an EPK style making-of and origins for Halloween. Bonus points that it includes a voice-over by Brian Cox!

VFX breakdown of the bus scene. A little over a minute but does show how the single scene was created using various composite shots.

Deleted scenes w/ commentary. 17 minutes and about 8 scenes.  Some of the scenes include; Another intro of Sam which is quite goofy. An extended version of the Principal (Dylan Baker) dragging in the body of Charlie (Brett Kelly).  The Commentary by Dougherty is a lively explanation of why this was all Cut.

Storyboards and Conceptual Art gallery can either be searched through or automatically run through which amounts to 19-minutes.

Behind the Scenes Still Gallery which like the previous gallery can be searched through manually or automatically run through change which amounts to 13-minutes.

Comic Book Gallery which allows you to read one of the first Trick ‘r Treat comics.  Like the previous galleries can be searched through or automatically run through which amounts to 8 minutes.

Fear.Net Shorts are a collection of nine shorts. Not really shorts as much as ads or intersals for Trick ‘r Treat or Fear.Net as a network.

Rounding out the special features is the Theatrical trailer.

Scream Factory has a homerun on their hands with this new edition of Trick ‘R Treat.  Great Transfer.  Packed with special features.   This is a definite HIGHEST POSSIBLE RECOMMENDATION!!!