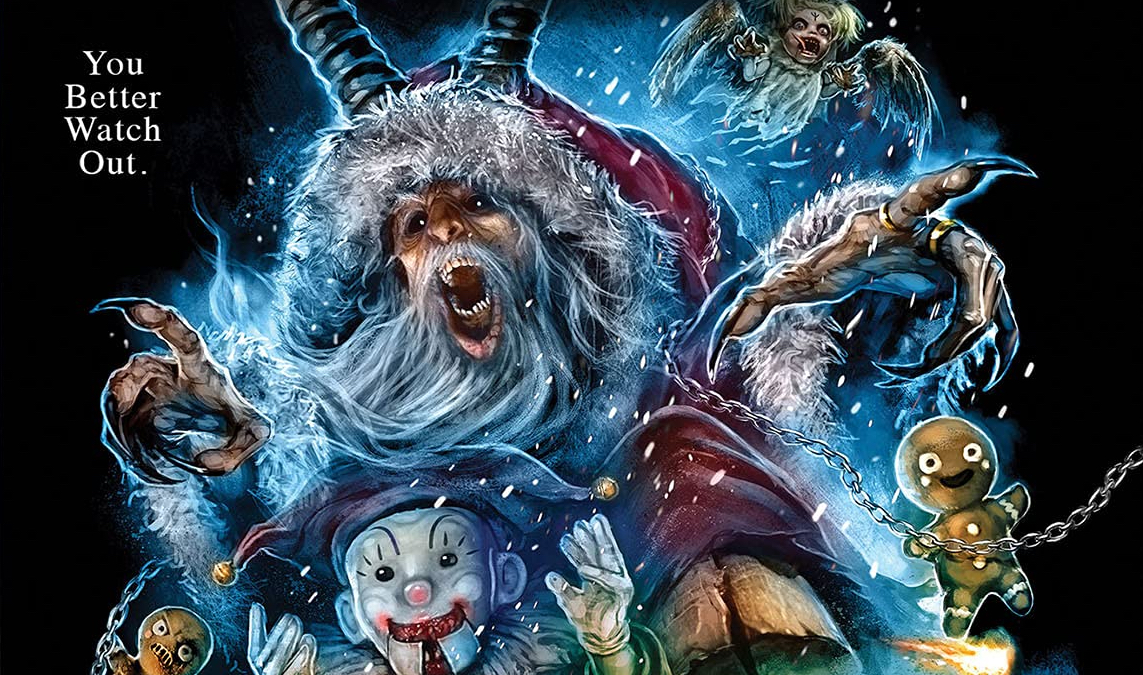 Krampus is a modern-day Christmas time classic.  Scream Factory has pulled out all the stops for their Dolby Vision and Atmos encoded 4K UHD Edition!

There’s something inherently fun about genre films mashing it up with Holidays.  Specifically, Christmas.  Die Hard, Gremlins, The Last Boyscout, The Nice Guys, The Silent Partner and now … Krampus.  Much like those other classics Krampus understands that to work you need to have equal parts Christmas as you do whatever the genre you’re mixing into that heady concoction. Luckily for all of us dysfunctional families is the meat grinder for any horror film but especially a creature feature.

The film is a wonderful throwback to 1980’s creature features done in the right way.  There are never outright homages as much as the film is indicative of the tone and spirit of not just the horror films of the era but also of the comedies of the era.  Which is where Krampus ultimately gets its power.  As it never outright xeroxing anything of the era the originality of the design work, not just creature and FX work but the production design and photography.

Part of the genius of writer/director Michael Dougherty’s films is that it’s a Christmas movie for the first twenty minutes of its lean and mean 97-minute total.  It allows just enough time to set the stage and the stakes for this family of well-off and not-so-well-off families.  Having Adam Scott and David Koechner as the patriarchs are one of the many adroit choices made by Krampus that leads to some wonderful playing with expectations.  The same goes for Toni “GOAT” Collette and Allison Tolman who are both wonderful as sisters and matriarchs.

Krampus is filled with the sort of micro-confounding of expectations that anyone that has seen a holiday or horror film will revel in.  The film is never sadistic enough to ruin the fun of what’s a truly fun and funny holiday film.  The film is never fluffy and warm enough to ruin the fun of a horror film.  The balance of tone and style here is as heady a brew as Doughtery’s first feature the Halloween horror classic Trick ‘r Treat.

By its end Krampus, both the entity and film, have placed their respective stamps on the Christmas holiday.  One that many, if not all, will want to return to time and time again.  One may even add it to their Christmas in July festivities.  Krampus is just that damn good.

NOTE: The Naughty Cut With Additional Scenes And Adult Language Cut To Get A PG-13 Rating (Transfer Supervised By Director Michael Dougherty)

Scream Factory has done an amazing job with the 4K UHD disc.  Compared to the original 2016 Blu-Ray as comparisons, this is an uptick in quality in every way.  The image’s sharpness, color reproduction, contrast levels, and black levels are all-around better than the original Blu-Ray release. The Dolby Vision Encoding does give the image greater contrast levels and luminous quality to the image.  Note that like most Dolby Vision encoding because of the greater dynamic range the image is a shade darker than the Blu-Ray.  The transfer is without a doubt an upgrade from the original release and well worth the purchase alone.

It should be noted that they’ve included a Dolby Atmos track on both the UHD and Blu-Ray.  This track is designed to work out anyone with the ability to play the encoding.  My setup got a true workout throughout the run time.  This is the kind of added bonus that benefits anyone with the proper setup.

The archival audio commentary by co-writer/director Michael Dougherty, and co-writers Todd Casey and Zach Shields opens with some great information about the Universal Logo they wanted to use but weren’t able to and the Black Friday Sale horror opening.  Other details from the commentary include shooting in New Zealand and the problems that it created, the casting of the film, how the film is structured, the history and development of the project, the use of practical and digital FX work, and how they used WETA for both, working with kids and infants and how they worked around with time constrictions, the PG-13 rating and why they intentionally went for it, the test screenings, the creation and puppeteers of the Clown Snake, the voices of the gingerbread men, a cameo by Rick and Morty (yes, the Rick and Morty), the design of the Krampus that was actually designed by Dougherty, some of the connections to Trick ‘r Treat and them sharing the same universe, and much more.  The is a great insightful commentary track for anyone that wants to learn about more Krampus and how it was created.

Interviews – All-New interviews are in a submenu all their own.

A Dash of Mischief (18:31) – is an all-new interview with director Michael Dougherty.  The director discusses the origins of his interest in Krampus as a holiday figure into a feature film. There’s some great art that’s included including Krampus Postcards.

Storm of the Centuries (8:29) – is an all-new interview with producer Todd Casey.  Discusses the details of the development of the script and story, the inspiration from real-life family members, and other great details.

The Great Protector (8:35) – is an all-new interview with actor David Koechner.  The actor with great enthusiasm discusses his interview with Dougherty, his experience of shooting the production, the behind-the-scenes crews, and artisans, a great story about a dinner party with Peter Jackson, working with Adam Scott, Dougherty with a few great stories, and much more.

Something Bad Happened on Christmas (11:30) – is an all-new interview with actor Allison Tolman.  The actor discusses her move to LA after working on the TV Series Fargo and how she came to be cast in Krampus, the largeness of the production, working with Koechner, Scott, and Toni Collette, and much more.

Max’s Journey (5:27) – is an all-new interview with actor Emjay Anthony.  The actor how he was cast, working in New Zealand and the production, how he worked on the production as a child actor having to balance school and work, working with Scott, and much more.

Lord of the Things (10:12) – is an all-new interview with WETA’s Richard Taylor.  Taylor discusses how he met Dougherty during a trip to Australia, how Dougherty pitched WETA and Taylor on the film, how Taylor worked with Dougherty as he was an artist, how they produced the physical suit of the Krampus, some of the detailed work they did for other creatures in the film, and much more.  Note the interview was filmed via Zoom.

Mapping Mythology (7:54) – is an all-new interview with storyboard artist Simeon Wilkins.  The storyboard artist discusses meeting Dougherty through a mutual friend, storyboarding specific scenes, how he based a character off David Koechner who was eventually cast, and much more. There is a lot of great footage of Wilkins’ storyboards.

I, Krampus (11:16) – is an all-new interview with performer Luke Hawker.  The performer of the Krampus discusses how he first heard of the project at WETA, how he came to work as a performer on the film, working on stilts, stories from the production, working with the various actors, and much more. Note the interview was filmed via Zoom.

A Winter Chorus (8:05) – is an all-new interview with composer Douglas Pipes. The Composer discusses the inspiration and approach to the score for the time.

Krampus Comes Alive (29:30) – this archival making-of-featurette is divided into five sections.  This great making-of is both polished and deeply informative on the production and what it took to create.  There is a heavy emphasis on the FX works in all its forms but because the film is very much a love letter to practical FX heavy movies of the 1980s, this is a goldmine.  The featurettes can be played individually or through a PLAY ALL function.

Behind-The-Scenes at WETA Workshop: Krampus (9:54) – an EPK style look at the work that WETA Workshop did for the film. Comment by Richard Taylor, Doughtery, Anthony, Koechner, Tollman, and other cast and crew.