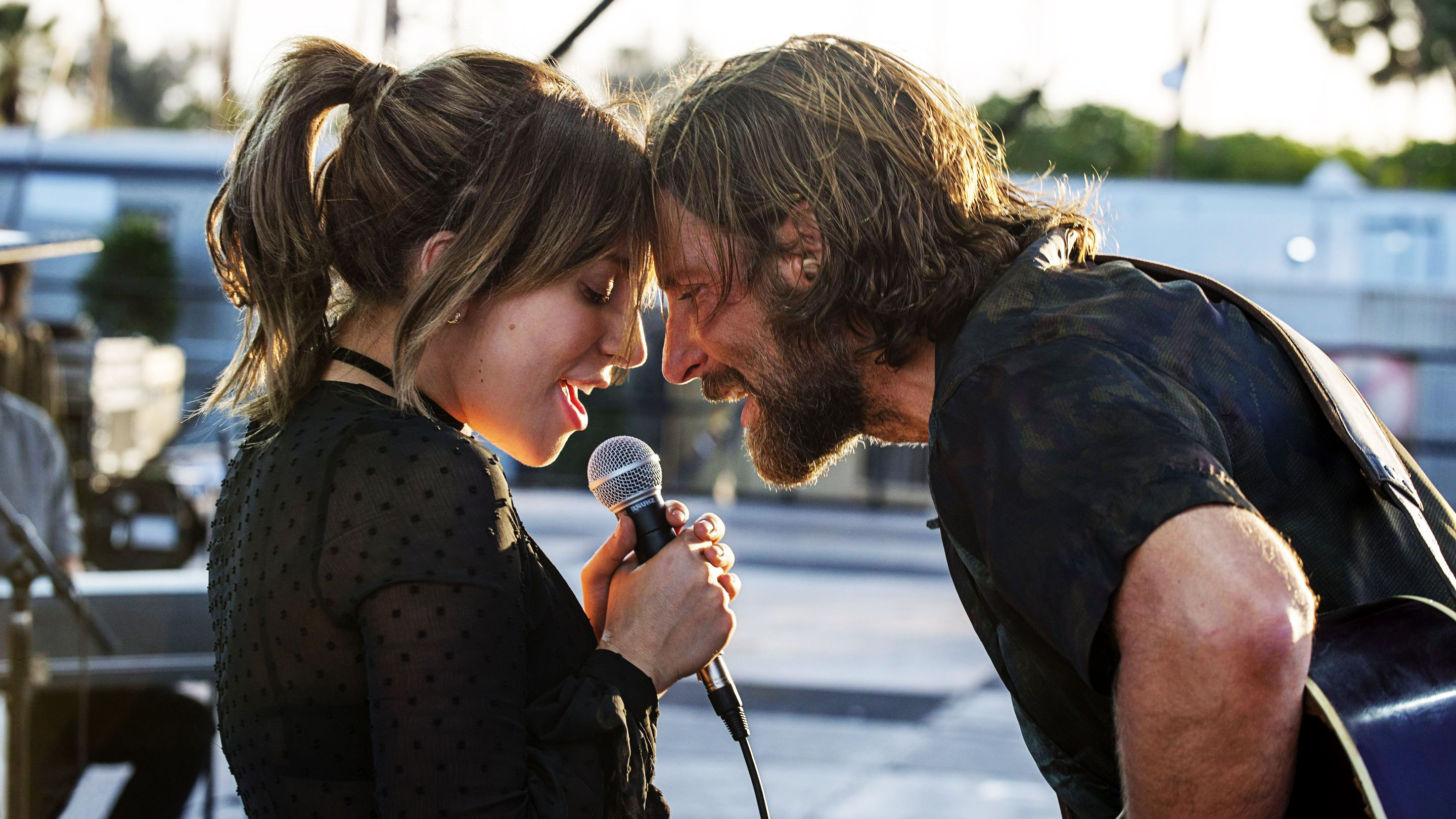 A Star is Born, the new film co-written and directed by Bradley Cooper, is a cinematic perfect storm.  Take a time-honored (but potentially stale) premise, a lead actress heretofore only known as a flamboyant pop star, a leading man who has never directed a feature film and a batch of original songs.  Put them through the grinder of the Hollywood studio system, and you would typically have a disaster on your hands.  Instead, this 2018 iteration of A Star is Born is a sensational love story that leaps off the screen thanks to the chemistry of its leading couple and its top-notch soundtrack.

Bradley Cooper plays Jackson Maine, a rock star at the peak of his craft and burdened by a serious monkey on his back.  After a show, Jackson is in search of his next drink and wanders into a drag bar where he sees Ally (Lady Gaga) perform Edith Piaf’s signature tune, La Vie En Rose. He’s smitten by her voice, but after a few hours of wandering through town with Ally, he’s more smitten by her as a woman.

Jackson quickly discovers that Ally is a natural songwriter and coaxes her onstage for one of the most electrifying music moments in recent film history.  Those familiar with the previous versions of this film know what awaits.  As Ally’s star rises, Jackson’s begins to fade, and their love is tested by alcohol, drugs and the price of fame.

Love stories sink or swim on the chemistry of their leading couple, and Bradley Cooper and Lady Gaga deliver a knockout as the star-crossed lovers. The film avoids any kind of “meet cute” and focuses instead on the tiny details of meeting someone for the first time — the way their fingers brush each other for a moment, the way Jackson looks in Ally’s eyes as he doctors her bruised hand in the parking lot of a supermarket, the “Who? Me?” look on Ally’s face when Jackson tells her she’s beautiful.  Every nuance is pitch perfect.  The entire film rests on the believability of their relationship.  Without it, none of the film’s third act pays off.

The supporting actors are perfectly cast.  Sam Elliott matches Bradley Cooper’s intensity as Jackson’s older brother and father figure, Bobby.  Despite his long-standing reputation as a rude, crude stand-up comedian, Andrew Dice Clay has found new life as a character actor, and his portrayal of Ally’s father is truly touching.  Even Dave Chappelle’s brief appearance as an old musician friend of Jackson’s helps to ground the film at a critical moment.

Matthew Libatique’s choices as cinematographer give the film an immediacy and urgency.  His over-the-shoulder POV shots and extreme close-ups put the audience in the thick of the concert performances and in the midst of Jackson and Ally’s personal lives.  You can practically smell the sweat coming off the musicians and the alcohol seeping from Jackson’s pores.  The usual wide shots and grandiose concert panoramas would destroy the intimacy.  It’s as if the crowd is just a theory, and the only two people on stage are Jackson and Ally.  We see the intensity of their connection without having it diluted by flashy camera techniques.

Of equal importance is the quality of the soundtrack.  You can’t sell the idea that Jackson is a mega-selling rock star nor that Ally is a newly-discovered sensation if the songs themselves are dead on arrival.  A Star is Born features the best original songs since Ryan Bingham and T-Bone Burnett teamed up for 2009’s Crazy Heart. Lady Gaga and Mark Ronson should probably clear off some mantle space come Oscar-time.

Given the meme-ification of America and the long march through awards season, the backlash to A Star is Born is certainly on the horizon.  Mark my words.  Social media loves to kill its darlings (and sometimes popular culture right along with it).  Just ignore any naysayers, take your guy or gal by the hand, and head to the theater.  It’s hard to find a romance that resonates like this one.  It’s one of the best films of year.