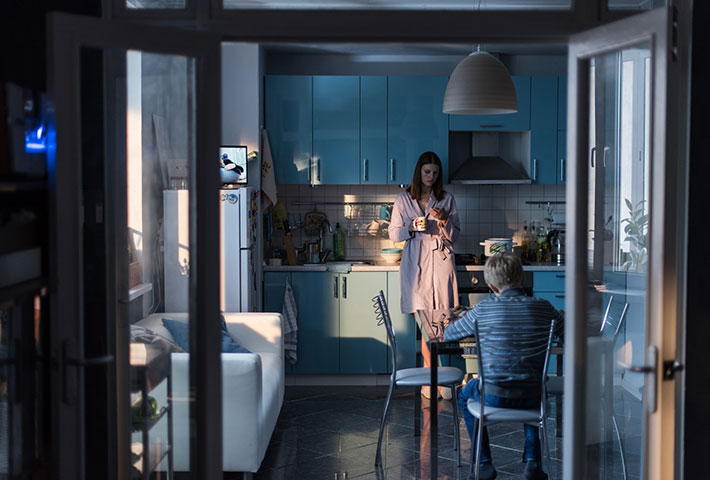 Marie got a sneak peak at a strong contender for the Foreign Language Academy Award Loveless, including a Q&A with the director Andrey Zvyagintsev.

A week in advance of the official UK release, Manchester’s leading independent cinema (and my own personal favourite) HOME brought the cinema-going citizens of the region a preview screening of Loveless followed by a Q&A with director Andrey Zvyagintsev and producer Aleksandr Rodnyanskiy. Loveless is nominated for an Academy Award this year in the ‘Foreign Language Film’ category and is the director’s second nomination – his first being three years ago for Leviathan.

The film follows a mother and father – going through an acrimonious divorce and both already with other partners – who find themselves thrown back together when something terrible befalls their son.

We spend time first with one parent as they navigate the working day and then move on to their evening date, and then the other parent, picking up clues as to why their relationship has failed along the way – and realising that neither one is probably entirely to blame. We’re not meant to take sides. Love – and the ensuing failed relationships – are complicated. Complicated enough for the adults at their centre. But in one short devastating shot, we see just how traumatic the breakup is for the couples’ son. It’s brief but plunges a dagger into the heart.

While there is no doubt that the film’s title is an apt one, pockets of the full audience laughed quite heartily at some moments which occasionally puzzled me – until it became obvious during the Q&A that these were Russians or people who know Russia well, and who were clearly picking up on cultural references which just didn’t come across in the subtitle translations. I love that kind of thing – it always brings something extra to a screening.

Zvyagintsev said on more than one occasion during the Q&A that he did not regard himself as a political filmmaker. And yet I have the impression he was being a little crafty in his responses; I see no way that political commentary on contemporary Russian life is not present in this film. It’s there in the disinterest of the police, the proliferation of vanity and consumerism among the rising middle classes, radio broadcasts of events in Ukraine. While the official public authorities are next to useless in the crisis, a group of local volunteers does the most to help and support the parents. It’s also interesting to note the amount of times technology intervenes in or sometimes gets in the way of, communication. Selfies, Skype and cell phones abound, serving to emphasize the distance and often coldness between friends and relatives.

Wrapped in some beautiful, glacial cinematography, Loveless is a personal story with a political undertone which haunts long after the final image.