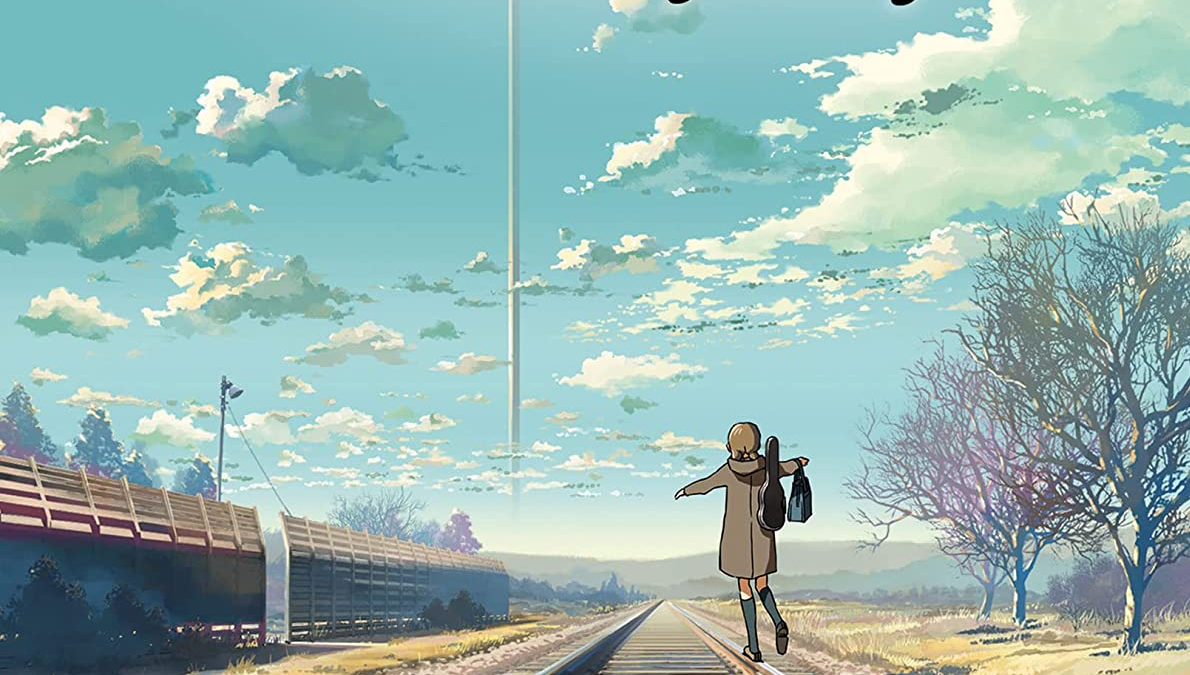 Your Name writer/director Makoto Shinkai’s earlier work comes to Blu-Ray thanks to Shout Factory/GKIDS.  The Place Promised in Our Early Days is filled with thoughtful special features.

Many war films claim to be anti-war but feel as though they are propaganda for just that.  Writer/director Makoto Shinkai’s The Place Promised in Our Early Days is as much about the machine of war as it is about the power of friendship.

Set in an alternate history where post-WWII Russia occupies the northern half of Japan.  After what they call “the Separation” in the 1970s the Russian in their territory begin to build a tower that continues to grow higher and higher. Decades pass and teenagers Hiroki Fujisawa and Takuya Shirakawa find a down drone.  With thoughts of building a plane out of it to fly the to the tower – a forbidden/demilitarized zone.  A third teen Sayuri Sawatari begins to help them through each has hidden feelings for her.  As tragedy strikes it separates the friends. Years later as tensions begin to mount between the Russian Occupying Forces and unoccupied Japan grows into what could be full-on war.  Hiroki and Takuya find that their friend Sayuri may be the key to stopping the war.

Though a war movie, the film is truly a human-scale drama between two friends and what divides us as days turn to weeks turn to months turn to years.  More Jules and Jim and less Saving Private Ryan.  Though there is action and some truly amazing set pieces they’re not the traditional war film action.  The focus here is on characters and like other Shinkai’s other work the subtly of heartbreak and everything that’s left unsaid.

The film’s delicacy of emotion and character work is only matched by the epic canvas it is told on.  Shinkai as the primary designer on the film is meticulous in his design and detail.  Beyond the detail and grand canvas, he is working on there is an ethereal touch.  One would hate to invoke the genius of Hayao Miyazaki but Shinkai’s work is as beautiful and understanding of the real world as the legend.

Like the work of Miyazaki, The Place Promised in Our Early Days is far more complex than one would initially think.

Again, the transfer provided to Shout Factory/GKIDS continues to impress.  The film much like Shinkai’s other work is one of subtle mastery of the still life and realism.  Though the film is an alternate history/sci-fi/war film of sorts the film never feels visually extravagant.  The subtle nature of the narrative and visual until the lavish ending are beautifully rendered here.  Even the ending maintains everything that makes the transfer a delight.

Interviews With Japanese Voice Cast (32:41) – interviews with the Japanese voice cast Hidetaka Yoshioka, Yunka Nanri, Masato Hagiwara who portray the principal leads in the film.  Each interview which was filmed at the time of the original release in Japan covers similar questions regarding their character, working with director Shinkai, voice acting in general, their favorite moments from the film, their thoughts on the film, and more.  Each interview has a popup letting you know what the question the actor had been asked.  Japanese with English Subtitles.

Interview With Director Makoto Shinkai (12:35) – this archival interview with writer/director Shinkai done at the time of the original release is a winner.  The is a bit more technical in nature as he discusses his animation/production process and how it changed and evolved since he began, how he cast the film, his thoughts on each performer, the theme song, and much more.  Shinkai is a thoughtful interview subject as he is a director, giving some great insight into the film and how it was produced.  The interview has some great storyboard footage, glimpses at reference photos, designs, and other additional behind-the-scenes b-roll.  Japanese with English Subtitles.

The Place Promised in Our Early Days is an unexpected war film about friendship.  Shout/GKIDS have again created a wonderfully thoughtful package for this release.  Highest possible recommendations!!!