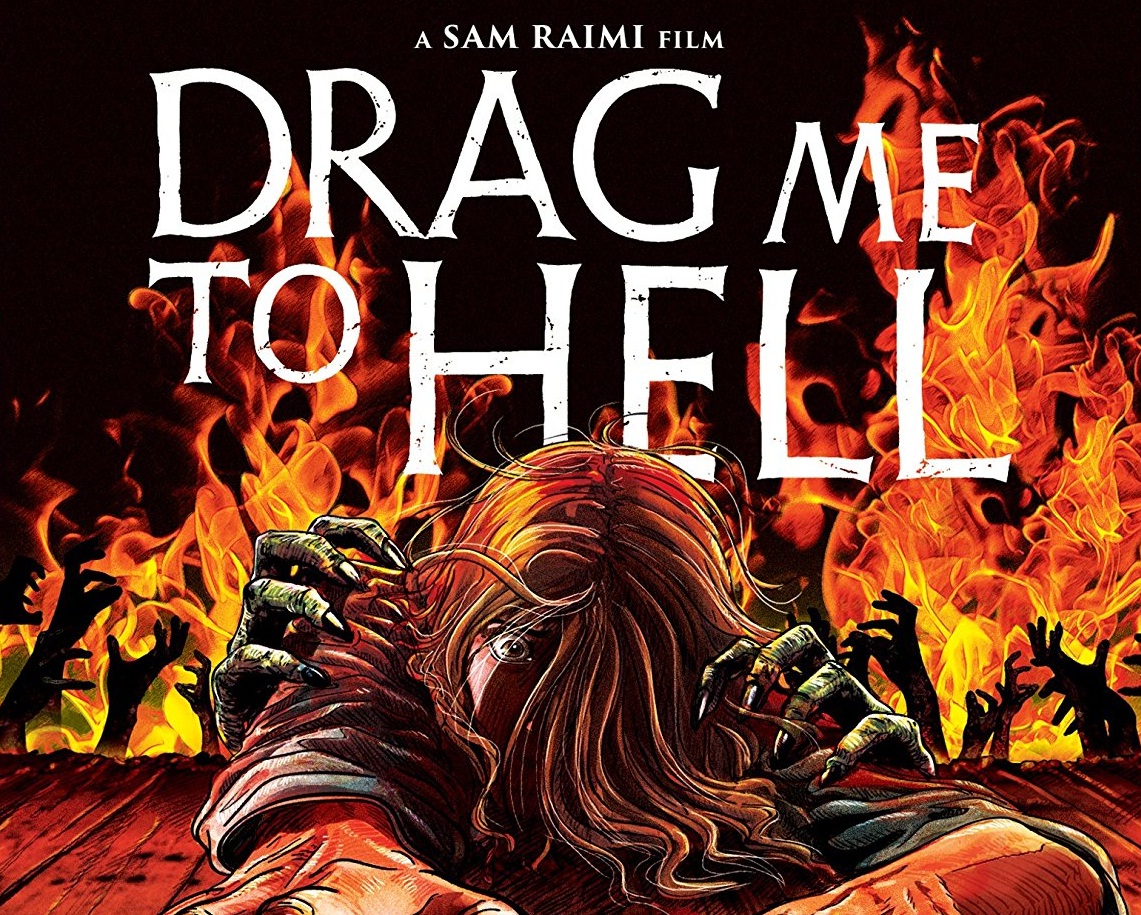 Adam takes a look at the beautiful edition Collector’s edition of Sam Raimi’s Drag Me to Hell being released by Scream Factory.  The underseen Raimi horror film deserves discovery beyond the horror fans who praise it, and justifiably so.  It may prove to this reviewer as a worthy contender for best Sam Raimi horror film.  Scream Factory does a great job with the transfer but the special features come up a bit thinner than one would expect…

The Evil Dead Trilogy casts a long shadow over director Sam Raimi’s career.  No film, including his first two Spider-Man films, has ever been able to shake the comparison to the iconic Bruce Campbell led horror trilogy.  Drag Me to Hell has suffered the most from this shadow.  Many, audiences and critics alike, dismissing the film as nothing more than trite PG-13 horror that was en vogue at the time.  Only the true horror fans and Raimi acolytes understood the subversive horror comedy was much more than its Rating and the initial reception.

Drag Me to Hell is a nasty bit of business that often times plays as sneaky as the Lamia, the demon sent to torment Christine (Alison Lohman) before, as the title states, she is dragged to hell.  Christine though a good person, makes one selfish impulsive decision that starts the film’s plot in motion. Raimi’s narrative never lets Christine off the hook even for a second, there is no simple out.  It’s the inevitability and your thinking that Christine will find a solution that wrestles every bit of tension out of the film.

The film, much like Raimi’s other work, puts its heroine through the ringer with a certain amount of glee.  Drag Me to Hell find Raimi at his stylishly torturous best.  The film is successful at being able to pull off not only the set pieces but sustained tension and dread more than any other of Raimi’s work in horror.  Part of that success is due to the script that he and brother Ivan Raimi wrote.  The screenplay manages to be more than a justification for a series of gags and set pieces.  It’s the perfect distillation of narrative drive and force.  Once Christine is cursed by the elderly Mrs. Ganush (Lorna Raver in an amazing performance that both repels and imbues sympathies) the film is unleashed to disrupt everything in Christine’s life.

The film’s success is implicitly tied to Raimi’s dogmatic adherence to the rules of this story he’s created and Lohman’s great empathetic work.  You may not want to admit it but you know that Christine is not getting out of this predicament.  Raimi never hides this fact and even shows us what happens to a small child that crosses paths with the Lamia.  Lohman’s work as the gentle Christine automatically puts you on her side, Raimi counts on it.  He understands those “final girl” conventions better than most and plays them to the hilt.

Raimi’s gamut is helped enormously by Lohman’s amazing work.  You feel every bump, scrape, bruise, nose geyser, and bodily fluid thrown (literal and figurative) at Christine.  Lohman plays Christine as someone trying to erase their previous life from existence but somehow unable to escape it.  The visual clues, moments like the speech therapy CDs, and Lohman’s unspoken behavior are fascinating clues to her character.  Lohman is able to strike the right tone with Raimi’s material.  Telling Christine history through the moments that Raimi gives her.  This is no more evident than a truly horrifying and painful dinner scene.  In those moments where Christine is fighting against everything in her nature to scream out, is both actor and director at their best.

NOTE: Review is for the Unrated Director’s Cut, which is the preferred cut with the exception of one item.  There is a joke that is an editorial smash cut involving a cat.  That joke has been replaced in favor of a more Unrated version of the scene.  Much like the Army of Darkness director’s cut with the famous Ash vs. Evil Ash scene ending moment, this is a minor gripe but does need to be noted.

The two (for the theatrical and unrated) NEW HD Master Taken From The 2K Digital Intermediate for this release is stunning.  Comparing to my previous Universal edition shows marked improvements on the grading, color reproduction, and contrast.  There isn’t that DNR that plagued early Universal Blu-Rays.  These are simply put, stunning transfers.  It should surprise no one to learn that this was one of the films to be completed through a 4K Post-Production Color Grading and Print processing.

The first disc houses the Production Diaries, Additional interviews, TV Spots, and Trailers that were apart of the original 2009 release. The Production Diaries and Interviews amount more than an hour of content. They do a serviceable job of giving a more EPK style tour of the production.

The second disc which contains the Unrated Cut also houses all of the new material.  The new interviews with Lohman, Raver and Composer Christopher Young are good and an interesting albeit very short look into the production.  Yes, it does amount to 45 minutes of content but without the sort of deep dive coverage we’re used to, it seems a bit abbreviated.  Those looking for a Raimi Commentary, or featurettes from the director and KNB (who did the Makeup FXs) will not find these.

Scream Factory has released a solid edition of Drag Me to Hell.  The transfer is nearly flawless.  The special features lack the new content that many expect from Scream Factory may find buyers wanting more.  Recommended.

Scream Factory’s Collector’s Edition of Drag me to Hell will be released on February 13th!